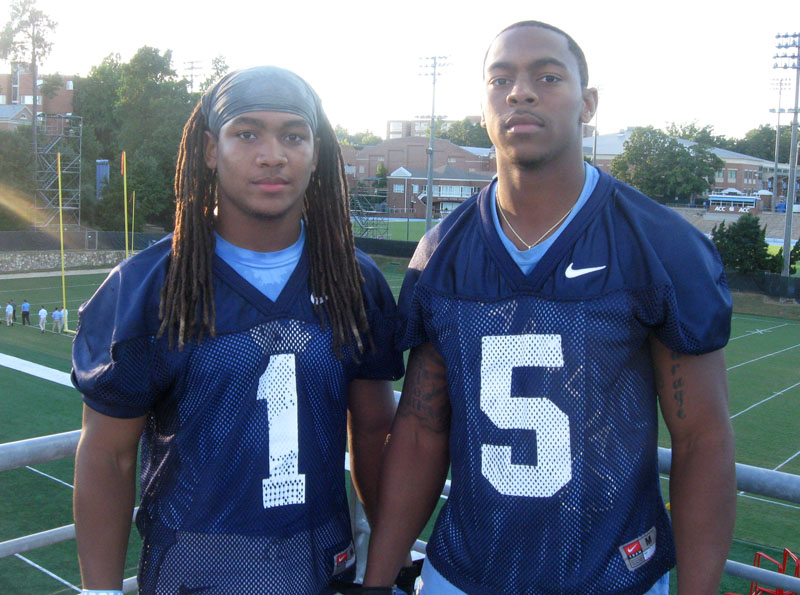 Running back Khris Francis (1) played at Hillside High School for four years before committing to play at UNC, where he is now a freshman.
UNC wide receiver T.J. Thorpe (5) is a native of Georgia but moved to Durham when he was 10 years old. He played at Jordan High School. (Staff photo by Aaron Dodson)

When eighth-grader Khris Francis began working out in preparation to play high school football, his trainer needed a way to motivate him — a method of pushing the young athlete beyond his limit to bring out the player he had the potential to be.

At the time, Francis was stronger and faster than most kids his age. So the trainer had a bright idea.

“I was always the type of person that if I saw somebody working harder than me then I wasn’t going to allow that,” Francis said. “So he put me with people that were of course stronger than me and faster than me just to make me work that much harder.”

One day, the young running back was invited to a workout, but after arriving at the field, he was not greeted by fellow eighth-graders. Francis took the field with high school football players, including one in particular — T.J. Thorpe.

Five years removed from their first encounter, both Francis and Thorpe, now teammates on the North Carolina football team, remember that day all too well as the beginning of a long-lasting relationship.

Thorpe, the recipient of more than 10 scholarship offers from Division I college football programs out of high school, was seen by the two players’ trainer as the perfect candidate to help Francis achieve his goal of also playing at the collegiate level.

“We would do little workouts together and my trainer would use me as an example for Khris as far as this is what point you want to get to,” Thorpe said. “You want to get to being recruited and this, that and the third.

“Me and him had a pretty good relationship. I always thought of him as a little brother to me or whatever.”

But aside from football, both Francis and Thorpe have a common claim on something else. The two players each call Durham their hometown, cherishing the times they would represent their city on the field and under the lights at Friday night high school football games.

Francis attended  Hillside High School, where he joined forces with many of his teammates from his Pop Warner football team, the Durham Eagles.

Though the two were friends, Thorpe said at times, especially when it came to game days, he and Francis were rivals.

“It just so happened my senior year I ended up playing against him when he was at Hillside,” Thorpe said. “I got to tackle him and talk junk to him a little bit, but other than that, if he ever had any questions or anything about college or the recruiting process, or if his parents did — anything — he could always come talk to me if he had to.”

Francis said the decision was not a difficult one for him as he grew up a UNC fan and connected with the football team’s coaching staff on his first visit to the school. And  with Thorpe already on the team, he had someone to

“I think it helped out because it’s so much easier going somewhere where you already know someone’s done the exact same thing as you,” he said.

Francis and Thorpe, a redshirt sophomore wide receiver on the team, are two of just three players listed on UNC’s roster from Durham.

UNC tight ends coach and recruiting coordinator Walt Bell said one of the team’s top priorities is to secure the best players in the state. And for Bell, one’s choice to attend a school close to home tells him a lot about the player.

“People talk about family, and how important it is to them, but to actually see it take place,” he said. “I think it’s really neat that Khris and TJ and those guys have that ability to pop home and come back, handling those family obligations without it being out of the way, and still be successful as they’re going to be.”

Though the group from Durham is small, Thorpe said the collective sense of pride the players have for their city is enormous.

And while it was a trainer that introduced Francis and Thorpe several years ago, it is perhaps both football and Durham that has kept them together.

“We like to think that when we go out we represent something bigger than just us. We take pride in being from up the street, and feel like this is our backyard so we have to represent it as such,” Thorpe said. “It gives us something more in common – a little bond.

“And whenever we’re clowning around about where people are from, me and Khris are always having each other’s back on that because I mean we’re both from Durham.”