When Adrianna Poole and her family moved from Ohio to North Carolina three years ago, the timing couldn’t have been any better for the young basketball player. 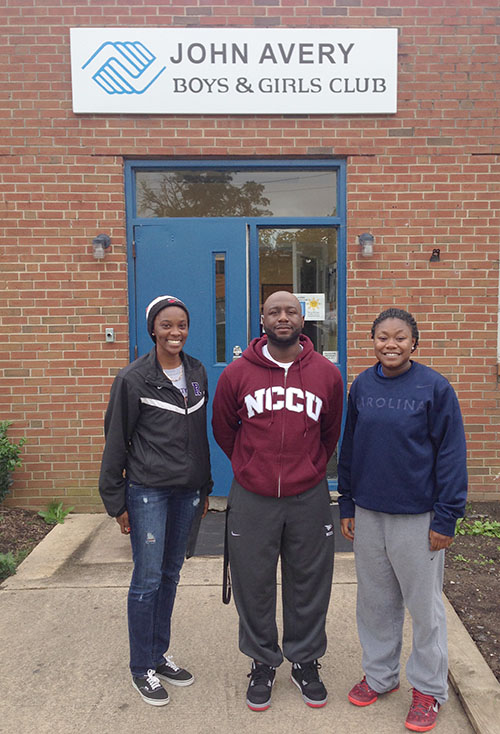 Kiera Jacobs (far left) and Adrianna Poole (far right) with John Avery Boys and Girls Club women’s basketball coach Dexter Jenkins. Jacobs and Poole played for the club’s team this past summer and attend Riverside High School in Durham, where they both play on the varsity team.

The move occurred in the middle Poole’s freshman year of high school, just before the start of the winter basketball season at Riverside High School in Durham.

And while she expected to meet a much better crop of players in North Carolina than the competition she encountered in the Midwest, she couldn’t anticipate what she would find at the tryouts for Riverside’s basketball team.

There, she met Kiera Jacobs, marking the beginning of a long-lasting friendship on and off the court.

But based on Poole’s first impression of Jacobs, the strong bond the two players ultimately developed didn’t look so bright.

“When we were in tryouts and I really didn’t know her or anybody else — I was new and just kept to myself,” Poole said. “She has this look on her face when you first meet her. And to be honest, I thought she was mean.”

Fast-forward to today and Poole is heading into her senior season on Riverside’s varsity women’s basketball with Jacobs still at her side.

For Jacobs, it all began at that first tryout. For her, the game is what brought, and kept, them together.

“Starting freshman year, we didn’t know each other,” Jacobs said. “We came together through basketball and are together in everything now.”

“We make a good match on and off the floor.”

The two players, however, were not originally on the same team at Riverside. Poole started off her career at her then new high school a part of the varsity team.

But it was only a matter of time before Poole moved down to play for the junior varsity squad with Jacobs. And the pair has been together ever since, through the wins, losses and even injuries.

During the summer after their freshman year at Riverside, Poole tore her anterior cruciate ligament — a day she remembers all too well.

“I did it playing with the guys. I got the ball, ran down court and, I don’t know, it was like a slip — I went up for a layup, just slipped and fell,” she said. “After that, I didn’t go to the doctor right away. I went to Riverside workouts and kept working.

“But then it buckled again and really hurt, so I went to the doctor, and he told me I had to get surgery if I wanted to play again.”

Jacob’s counsel to her friend and teammate during her recovery was blunt — an indication that she simply wanted her back on the court with her.

“I just told her to get back in the gym,” Jacobs said, “as soon as possible.”

And after about a year, Poole made it back, joining coach Dexter Jenkins’ team at John Avery Boys and Girls Club that summer.

For Poole, one thing she said still missing in her game after the injury was confidence, which Jenkins helped her find.

“When you have a player that’s coming off an injury like that, you really just want them to help her build confidence because that’s one thing they lose more so than anything else,” Jenkins said. “Usually with the ACL injury, the recovery time is less than a year, but really you have to make up on that back end for confidence in order to do what you want to do.

“So it’s really just about getting confidence and then working them out slowly to strengthen that injury so that they can get back into their old form.”

Poole was also without something else — Jacobs —  as the two played on different summer teams heading into their junior year at Riverside.

But this past summer —Poole and Jacobs’ last chance to play Amateur Athletic Union (AAU) before college — the duo joined forces at John Avery, forming what Jenkins called a perfect mesh.

“Both of them having leadership characteristics, you would think that would clash, but they feed off of each other pretty well,” Jenkins said. “They’re going to have disagreements, of course. But I think for them they both understand the overall goal, which is to make the team better by getting better themselves.

“They understood that and were able to help each other out, especially when it came to getting better. It was more a team thing and they meshed perfectly.”

Though the two players have aspirations to play college basketball, they realize their upcoming season at Riverside could their last time on the court.

But more importantly, it could be their last time playing together.

And if it is, Jacobs said she’ll miss the connection they have on the floor.

“I’ll miss the court vision —her ability to always know where I am, the pass just being there,” she said. “Sometimes I don’t expect it but she knows I’m there.”

For Poole, playing with Jacobs is something she’s come to cherish.

“I love playing with Kiera. I never have said this to her or really told her this, but I really do. She keeps me going, especially if I get frustrated at a point and she knows when that happens,” Poole said. “She tells me, ‘Keep shooting, you got it.’ Or if I’m doing something wrong, she’ll correct me, telling me to get on my job, to do my job.

“I like how that works with her and she always has my back so when Kiera’s on the court, I’m like ‘Ok, I’m good.’”

And now, looking back, Poole’s first impression of Jacobs — a bad one, that is — could not be more distant.

“I’ve always thought about if Kiera and I went to the same college and played ball together — That’s a dream,” she said. “I mean, she’s my sister.”