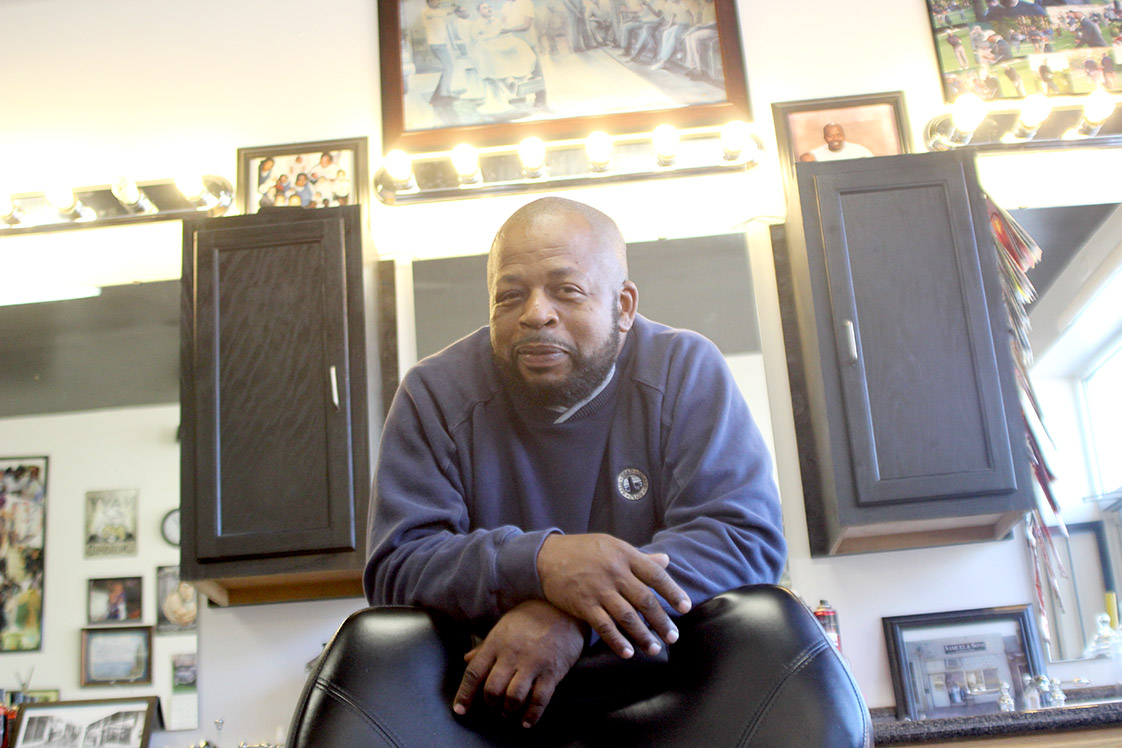 Samuel Jenkins at the single chair in his rebuilt barber shop on Angier Ave.: It’s about peace, man..”  (Staff photo by Jamar Negron)

Almost three years after a devastating fire destroyed his business, Samuel Jenkins is back on his feet.

Jenkins said rising from the ashes was a challenge.

“Everywhere I would look, it looked like the doors were closing,” he said.

He said being a “strong man” was key to his survival after losing the shop.

“You got strong men and you got gentlemen,” Jenkins said.  “Strong men do what’s right, gentlemen always have problems.”

Slowly but surely, Jenkins’ “strong man” persona and adherence to his principles allowed him to endure until he could restore his barbershop.

“Without principles, you can’t rebuild,” Jenkins said. “Rebuilding starts from within.”

Samuel and Sons now sports a remodeled interior and exterior. The biggest change Jenkins made was eliminating other barber chairs in the shop. Jenkins said he wanted to make the experience more “therapeutic.” He also said it makes it easier for him to control the atmosphere of his shop so it does not become a “center to the disagreeables.”

Jenkins considers his shop’s atmosphere important to the community.                 “[The shop] is almost considered to me as a command center,” Jenkins said. “If there’s a problem in the community, they can come see me.”

“A lot of people call me the mayor of Angier Avenue.” he said.

Jenkins used his influence to help push for a renovation of the street itself, and worked with the Angier Avenue Business Association to ally with the city of Durham and Economic Development Department.

“Its always good to give back,” he said.

He also said that “life had stopped existing on Angier Avenue.”

He said growing up in a struggling environment gave him insight into how others feel.

“When you come from that and you see others go through it, I will help you if I can,” Jenkins said.

Jenkins was clear that one plan would always remain.

“The plan has always and will always be the same,” he said. “What is man’s purpose on Earth if you can’t be of service?”

Jamar is a student at NC Central University and a writer-photographer for the Durham VOICE.