Equipped with just six aisles and two registers, Los Primos—the tienda that sits on East Main Street at its bustling intersection with Alston Avenue—is one of the only supermarkets in Northeast Central Durham.

With little access to nutritious foods beside those found at Los Primos, NECD qualifies as what food experts call an “urban food desert,” which often occurs in low-income areas that are often overlooked by larger grocery chains. 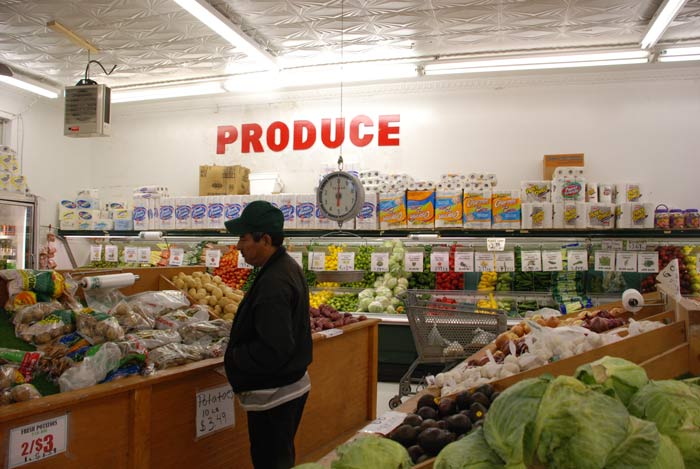 “Fresh produce isn’t readily accessible because it’s not within a 10-minute walking distance from much of the neighborhood,” said Constance Stancil, the director of Neighborhood Improvement Services in Durham. “For a community that relies primarily on its feet for transportation, that’s a problem.”

As the only supermarket in the community within a reasonable walking distance, Los Primos is the best option when it comes to nutritious food. Nonetheless, it offers only a smattering of healthy options—canned food and carbonated drinks dominate its shelves, though it does have a produce aisle with the standard fruits and vegetables, as well as items more typical of Hispanic cuisine, like dried chilies and corn husks.

“People are going to take what they can get, which typically means cheap, fast food,” Stancil said.

According to studies conducted by the Center for Disease Control and Prevention, however, a community’s food environment directly affects residents’ nutrition.

But that doesn’t mean the future is totally grim for NECD.

Efforts have been made on numerous fronts to combat the issue of food security in the community: SEEDS planted a community garden at the intersection of Elizabeth and Gilbert Streets, the Natural Environmental Ecological Management of N.C. (NEEM) has planted 38 individual vegetable gardens in residents’ yards since the program’s inception last June, and a new grocer—TROSA’s Grocery—is due to open by April 1 near the intersection of Angier Avenue and Driver Street.

TROSA’s Grocery—a project run by the Triangle Residential Options for Substance Abusers (TROSA) and owned by Joseph Bushfan, owner of the recently opened Joe’s Diner—is being built in direct response to the issue of food security in NECD.

“There are supermarkets, but no real grocery stores here,” Bushfan said. “These other places might have a banana on the shelf, but they don’t have real, nutritious food.”

And, unlike Los Primos and the small convenient stores that pepper NECD, TROSA’s Grocery will not carry tobacco or alcohol, Bushfan said.

Still, while there is reason to hope, whether the efforts will curtail food scarcity in NECD remains uncertain, said Wendy Noel, project manager of TROSA’s Grocery.

According to a TROSA survey, many NECD residents cook at home three or four times a week, Noel said. “We assumed with the results that families need to go to the grocery store regularly, but nothing about that area makes it easy to get to a grocery store.”

“It’s a huge undertaking for someone to try and take the bus or walk an entire family to the nearest supermarket,” Noel said. “It’s just not possible when a lot of people don’t have sufficient transportation here.”

To really curb food scarcity, residents need to know the importance of good nutrition and maintain an actual understanding of how to use foods in a healthy way, she said, echoing other food activists like Brodie and Ensminger.

“We can have the products available at the store, but we need to be sure that the community wants what we have to offer,” Noel said.