The Incredible Hulk, Superman, Wonder Woman — they were never the real superheroes, not to Tristine Johnson.

When she was little, she found power in running shoes, hurdles and javelins. She marveled at the men and women who harnessed those items to lead them to victory. 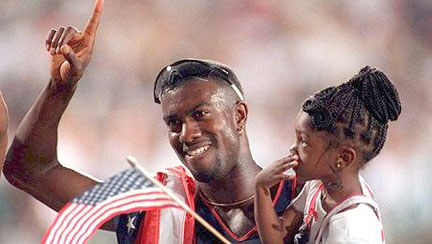 Allen Johnson holds up his daughter, Tristine, after winning the gold medal in the 110-meter hurdles in the 1996 Olympics in Atlanta. (Contributed by Tristine Johnson)

Her father was one of them.

Johnson jokes that she’s lived her entire life inside a 10-mile radius — born in Chapel Hill, raised in Durham. But with an Olympian for a dad, she’s also seen the farthest reaches of the globe.

When her father, Allen Johnson, won gold in the 110-meter hurdles in Atlanta in 1996, Tristine was there. Sydney, Australia in 2000? She was there. Athens, Greece in 2004? There. She couldn’t quite make it to all of his world championships, but, then again, she had class, too.

Now a senior at her father’s alma mater, UNC-Chapel Hill, and a jumper on the track and field team, Johnson, 21, is trying to flex her own superpowers. She’s a two-time NCAA championship qualifier, a standout student, a member of the Carolina Leadership Academy and co-president of the student-run organization Healthy Girls Save the World.

The situation is reversed.

Now, her father is the one doing the marveling.

Tristine Johnson took a quick bite, placed her dish in the sink of her Durham home and walked away. 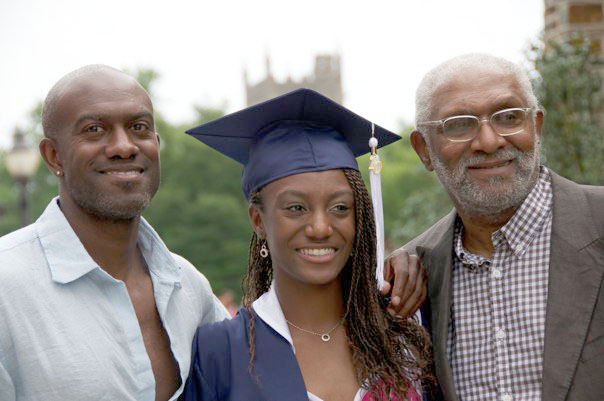 Tristine Johnson celebrates with her father, Allen, (left) and grandfather Ramon Judkins for her graduation from Jordan High School. (Contributed by Tristine Johnson)

“Tristine, come and clean your dish!”

A typical parental command, but what came next was something new.

“Hey,” he said, “Do you remember what the reading assignment was?”

It was the summer of 2012, and Allen Johnson had returned to UNC-Chapel Hill to complete his degree in sociology. He and Tristine had a class together.

“I’m like, ‘You can’t do that — you can’t just switch back and forth from dad to classmate,” said Tristine, laughing as she recalled the moment. “Now, you’ve yelled at me about washing the dishes. I don’t want to tell you what the reading was.”

That wasn’t the only time father and daughter butted heads. She said they often compared test scores throughout the summer. But she added that, by and large, she enjoyed the experience. Her father said he enjoyed it, too.

Allen Johnson, 42, had originally attended UNC-CH in the early ’90s. In his junior year, he met Tristine’s mother, Marcia Williamson. In March of 1992, he won an NCAA championship in the 55-meter indoor hurdles, setting a meet record with a time of 7.07 seconds. In September of the same year, his daughter was born.

Allen Johnson left UNC soon after to pursue his athletic career, and he returned in 2012 to a vastly different educational environment. PowerPoint presentations, laptops and the Internet replaced traditional note-taking and trips to the library.

It was an adjustment, but he relished the chance to spend time with his daughter in a different context.

“Not many parents get the opportunity to actually see what their child is like in class,” said Johnson, who now serves as an assistant track and field coach with the Air Force Academy. “I was a little bit apprehensive about it. I guess I was little more worried about being a classmate than a parent in class. But of course, just as a parent, I was watching to see how she came to class and that she was prepared for class, and I was happy with what I saw.”

What he saw was more than a student or an athlete — he saw a person who was assertive, active and confident.

“I’m not a very talkative person,” he said. “I’m more of a shy person, and to watch her be so sure herself and to do things she wants to do and do the things she’s passionate about, it makes me really, really proud.”

Tristine and her mother made a deal.

If Tristine could complete one lap around a track, her mother would sign her up for track and field by her sixth birthday.

One day, after one of her father’s track meets, 5-year-old Tristine had her chance.

She started running with a pair of boys. One boy was gassed after 100 meters; the other, after 200. But Tristine kept pushing, invigorated by the chase for first.

“People started clapping,” she said. “And then it just felt good, so I kept running and kept running, and I finished the lap.

Her parents never forced her to go; on the contrary, Tristine forced her parents’ hand. She was enticed by the physical heroics she witnessed at her father’s meets, and she soon displayed similar prowess, even at a young age.

She joined the Durham Striders Youth Association program to refine her skills, and by the time she joined the Jordan High School track team, it was clear she had a future in the sport.

“Between (the Striders) and her father’s obvious skill set, she had really good instruction, I think, as a youngster,” said Jordan High Coach John Gray, 70.  “So from my point of view, it was really just a blessing to have an athlete like this … Just a great a kid, and with me, always a great attitude.”

While at UNC, Johnson has improved her decision-making by learning how to adjust her approach during meets.

She’s paired her physical talent with a renewed mindset.

“Now she’s at the point where she can be competitive at every single meet she goes to,” said UNC Assistant Coach Steve Rubin, who works closely with Tristine. “Whereas before she would kind of wait for the good meet to come along … but now I think the consistency level is much higher.”

However, her effort isn’t limited to the track.

Organization — for Tristine Johnson, it’s what she needs to get through each week.

The obligations can easily stack up. There’s track and field, for one, then her internship at Northwest Mutual, her work with Carolina Outreach and the leadership academy and other student groups, then — sometime in between — class.

Sometimes, she turns to Rubin to sort through it all.

“He helps me keep all my things in order,” Johnson said. “I’m like, ‘Coach, I came up with a schedule, can you look at it?’ And he’s like, ‘Tristine, when are you going to eat?’”

Johnson, a global studies major, said she doesn’t have as much time to go out or spend time with friends, compared to some of her peers. But for her, that’s a worthwhile sacrifice.

She’s busy applying to graduate schools, including UNC-CH, to earn a master’s degree in public administration. And her focus extends beyond herself. She’s teamed up with her next-door neighbor from Durham, Camille McGirt, to promote healthy lifestyles for young girls through the non-profit organization called Healthy Girls Save the World.

It’s possible Johnson may never be the Olympian her father was, but she’s found other outlets through which to channel her will and determination — traits her father passed on to her.

“I like to think that the influence she got from me is just what it really takes to set and achieve goals,” Allen Johnson said. “And really, the hard work that it takes to achieve lofty goals. I think it’s carrying over into her student life. The reason she’s active on campus is because you have to go hard in whatever it is that you do.”

Through Healthy Girls Save the World, Tristine works with children who could someday follow in her footsteps — sometimes, she sees a little bit of herself in them.

“It feels great to be able to help people achieve their dreams just like this same community has helped me achieve mine,” she said. “And a lot of these girls come from Durham, and that makes me extremely happy.”

And in those little girls’ eyes, Tristine Johnson may very well be Wonder Woman.

Michael is Sports Editor of the Durham VOICE and a journalism student at UNC-Chapel Hill.