Without cheers or a gun crack, runners ready themselves.

About 50 kids take off to run a lap around Southern High School’s track. 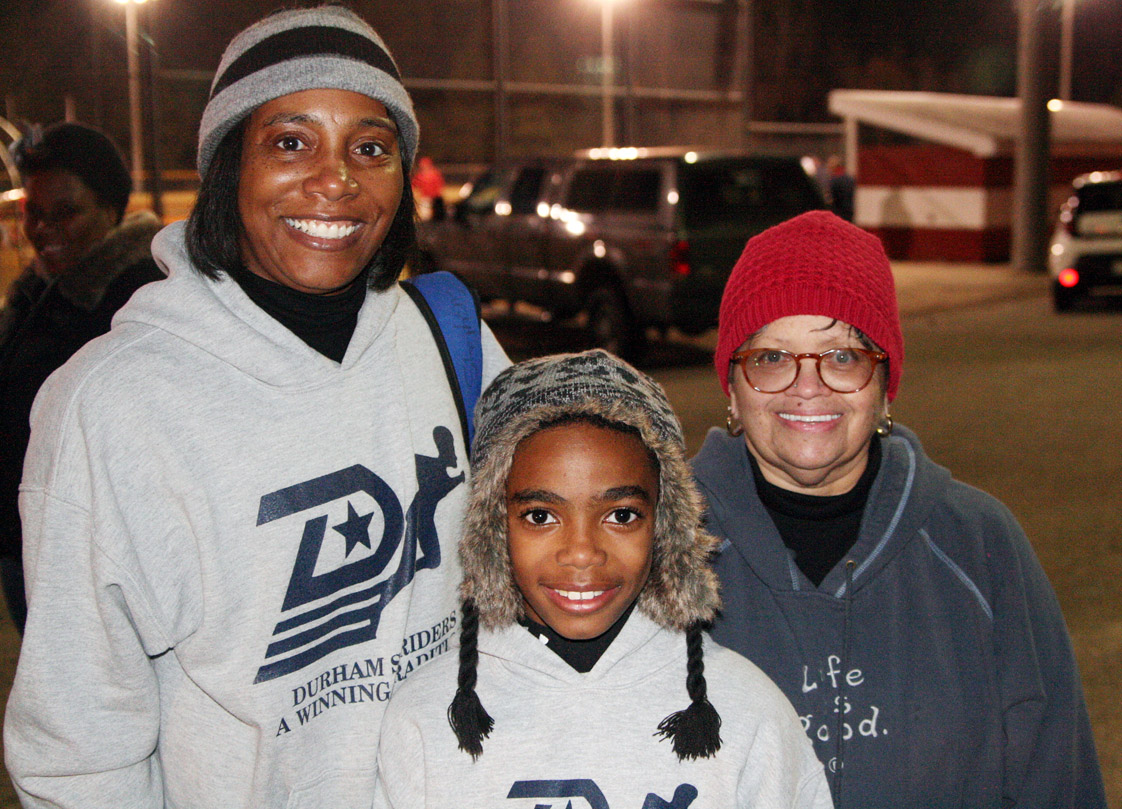 It’s day one of the Durham Striders Youth Association outdoor season practice and on this mid-March evening, parents shiver in the bleachers, watching and listening to heavy breathing and the soft patter of sneakers on the rubber lanes.

They nod in silent agreement to the coaching.

“Pump your arms to your face,” one yells to a hurdler.

“Where’s your toboggan?” Brenda “Coach Doc” Armstrong calls out to one kid.

After a soft mumble from another, Coach Sonya Stephens responds, “Nobody cares about your hair.”

That’s practice for a Durham Strider.

And the DSYA — in its 39th year — is showing no signs of slowing down.

The community track program started in the late 70s with only 30 children and three staff members. It’s grown to become one of the largest youth track developmental programs in America, serving more than 300 kids each summer with about 30 staffers.

Athletes, ages 6 to 18, are required to maintain A and B averages in school – a requirement that found each passing last year’s EOG tests. Combining educational programming with athletic training, the Striders not only develop physiques but also mental talents like leadership and character.

They’re proud of their alumni.

That’s the future of a Durham Strider.

Half finished in the top 20 for multiple events.

For Armstrong, who coaches distance runners, athletics and academics go hand-in-hand. Being tough on the field translates into doing well in school.

There is no quitting in either.

In ways, Armstrong is the reason so many youngsters participate.

Better known as M.D. Armstrong in the medical circles, she works as a pediatric cardiologist and associate dean (among other titles) by day at Duke and was one of the early integrators of the once segregated university.

A Rocky Mount native and mother of three young men, she was heavily influenced by athletes, academics and medicine early.

Her parents were Shaw University athletes. Her mother was a teacher and her father worked as a rural doctor.

After Coach Doc finished medical school and returned home, she became a Striders physician and Blount asked her to develop younger kids.

“When we started we had kids nine, ten and eleven years old,” said Armstrong. “Younger kids wanted to be involved.”

The Striders would train kids to go a bit farther each week. The more races they won, the more people they beat, the more kids wanted to participate.

The organization doubled in size and people came from several states to watch the training.

That was in the 80s and the lessons keep coming.

Since then Armstrong learned track is a medium, a chalkboard, teaching the community.

“The kids learn discipline, the ability to set goals, focus and make it happen,” she said.

Caleb Stephens, 10, runs the 400m, the 800m and the long jump. His mother is Coach Stephens, but he said she’s “just another coach” on the field.

Stephens is in his third year as a Strider and said kids get good training in the program.

“Run hard and you’ll get good results,” he said.

Those results attract parents, too.

Durham resident Starr Redic is mother of an 8-year old, D.J., who attended his first practice.

She wanted something for him outside of basketball season and liked the Striders reputation.

“I asked around and parents were telling me if I wanted to put him on a team, this is it,” she said.

Redic said with D.J. in elementary school, there aren’t many afterschool activities for him. The Striders, she feels, is a place to be around children his age doing something positive and having fun.

“It’s so much better than being in the streets,” she said.

Darren Bell is the father of a 14-year-old who is in his second year as a Strider. As a former strength and conditioning coach at UNC, Bell’s father used to run against the Striders back in the day.

Growing up in the segregated South, Armstrong knows hurdles beyond those on the track and said mentoring is a gift.

When given a gift, she said, it’s a sin not to give back.

“My mom used to say ‘leave a part of yourself with people you know you can make a difference with,’” she said.

That difference for her is in sports.

Armstrong points to hundreds of past Striders that keep their medals and ribbons “forever.”

Instead of putting $20,000 into keeping a person incarcerated each year, she said, that money could help 200 kids become model citizens.

With parental and coach volunteering from all over, she knows there’s a better way.

“It doesn’t always take money,” she said. “It takes time and if we used half the time we wasted, just think.”

Carlton is the Workforce Director for Partners for Youth Opportunity. He is also the former VOICE Teen Mentoring Coordinator and past editor of the award winning Campus ECHO of NCCU.