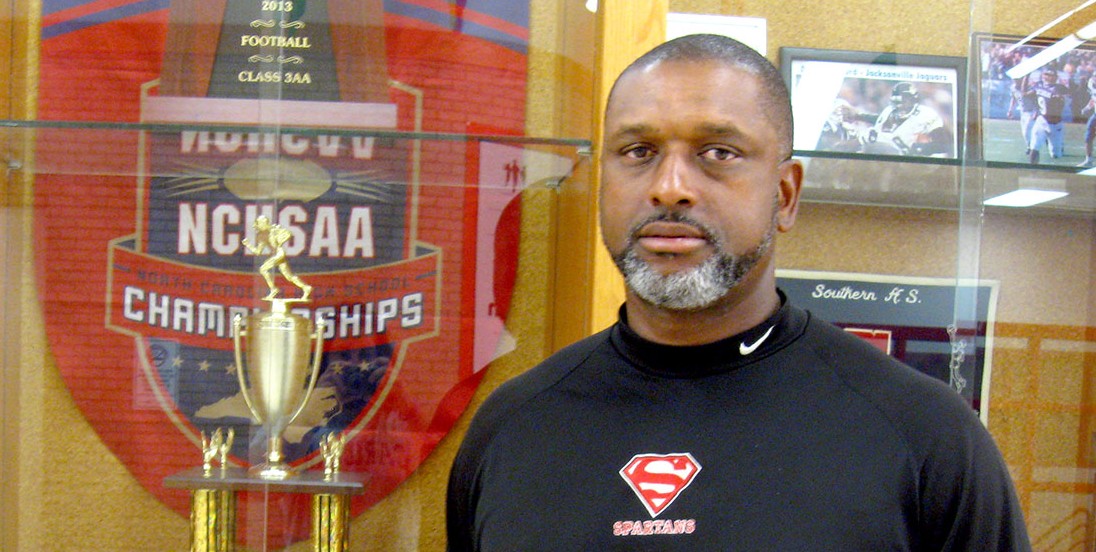 Darius Robinson sits in his cramped office at Southern High School. Behind him, college football recruiting letters from the likes of East Carolina and Wake Forest are tacked up neatly on a bulletin board. 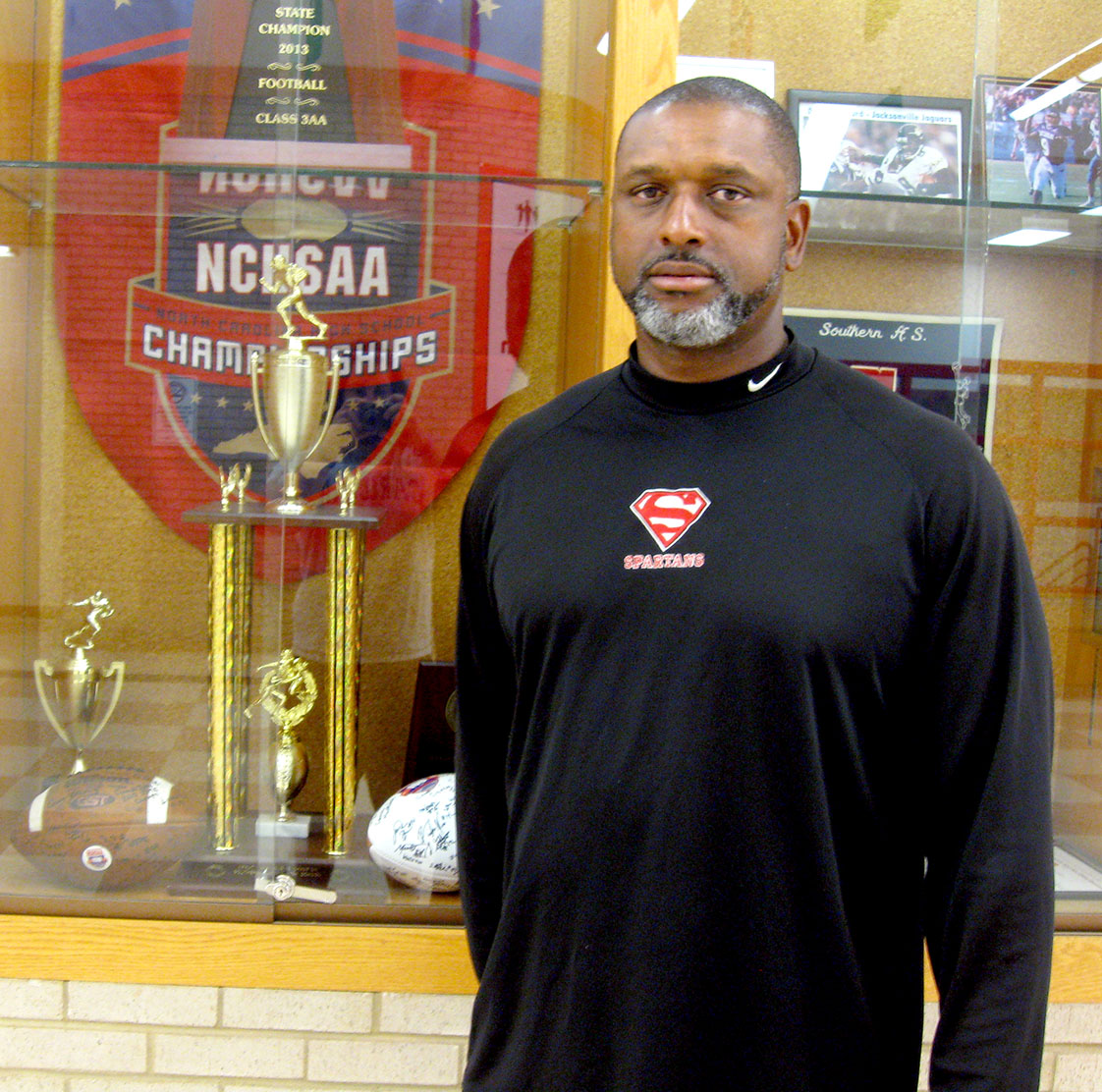 Darius Robinson stands next to Southern High School’s 2013 NCHSAA Class 3-AA state championship trophy, the first in school history. Robinson was an assistant coach on last year’s squad, but took over as head coach at season’s end. The Spartans are currently off to a 3-0 start this year. (Staff photo by Andrew Forrest)

“We’ve been a hotbed here in being able to produce student athletes in all sports to go to the next level,” says Robinson. “That’s a rewarding piece.”

And after being an assistant for years, he has finally taken over as the football team’s head man.

Robinson says that when he sat down with school officials to discuss the head coaching vacancy, former principal Kenneth Barnes urged him to take the reins.

“He asked me, ‘Would you be interested in being the head coach, because I feel like the coaches respect you and the kids respect you,’” says Robinson. “So I took a deep breath. I was like wow, I’m the AD and now, you want me to be the head coach.”

But after a bit of convincing, Robinson accepted the job. And according to former head coach Adrian Jones, it was exactly how he envisioned it.

Jones explains, “We had always talked about if I was to leave, that we wanted to keep everything like we made it, and that he would be the man when I left. He is doing a great job and I look forward to seeing him lead those guys to another championship.”

It may still be early in the year, but Southern is well on its way to another great season. The Spartans are off to a 3-0 start after defeating Scotland High School, 34-28, last Thursday.

However, Robinson admits that he tries not to think too often about repeating as state champions. He doesn’t want to place too much pressure on himself or his players.

“Coming into the season, I told the kids, the bull’s-eye’s on your back,” he says. “The bull’s-eye’s on the program. Everybody’s going to be gunning for us. Everybody outside the program wants to know are you going to repeat. And I immediately told them, 2013 is done. I said what we got to focus on is winning one game at a time.”

If Robinson sounds like a wise and experienced coach, it’s because he is. In fact, he was an assistant at North Carolina Central during the mid-1990s. He even coached Jones, who played cornerback at Central from 1994-1997.  After his time at Central, he began volunteer coaching at Hillside High School, and then at Southern.

Because he was a volunteer coach, Robinson had to get a job in what he calls, “the real world.” He worked as a pharmaceuticals representative, making sure that his schedule allowed for him to continue coaching.

After being laid off from his “real world” job in 2008, he applied for the position of Athletics Director at Southern. School officials rewarded his dedication to the Spartans athletics program by giving him the job. It’s the same type of dedication that he wants his players to have both on the field and in the classroom.

Jones says it’s obvious that Robinson wants to see his players succeed not only in football, but in life in general.

“He is a very focused man and wants nothing but the best for the kids,” Jones says. “He goes the extra mile for those kids. He treats all of them as if they were his very own.”

Felicia Cole is the head women’s soccer coach at Southern. Like Jones, she says that Robinson does whatever he can to make sure Spartan athletes succeed.

“As an athletics director, Coach Robinson is tasked with many daily obstacles,” she says. “With each task he is assigned, he continues to do it with a smile, knowing that he is assisting with guaranteeing another student-athlete will meet their desired goal.”

But Robinson is a humble man. He’ll never take credit for the athletic success at Southern. He simply wants to do whatever he can to help his athletes reach their goals. And he’s happy to come to work every day and do something he loves.

“There’s something about when you walk out and you smell that green grass,” he says. “And you look up in the stands and you see all the people who have come to watch you play.”

It’s the smell of that green grass that keeps Robinson coming back for more.

Andrew serves as the broadcast editor of the Durham VOICE -- UNC-Chapel Hill team. He is a senior journalism major from High Point, N.C.