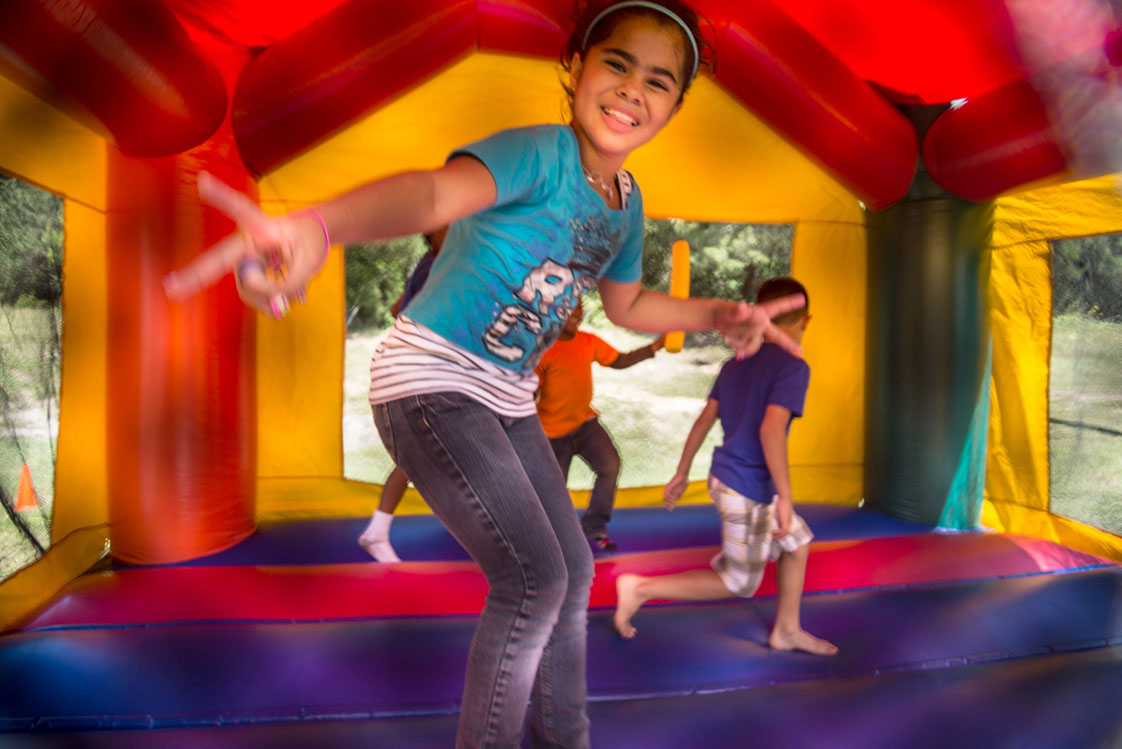 Children were enjoying the “bounce house” at Durham’s Latino Fest on September 27. Dariana Vargas, 18, who was the volunteer on-site, said, “I like giving back to the community, [volunteering] is like giving a little happiness.” (staff photo by Robert Berges)

La di da di, Durham likes to party, and on Saturday, Sept. 27 the 10th annual Latino Festival came to Rock Quarry Park – just to see you smile and enjoy yourself.

Cynthia Booth, a public affairs coordinator from Durham Parks and Recreation, said, “I like to see people come together to enjoy music, dance, eat food and have fun, as long as I see that I know we’re doing a good job.”

A police officer at the front gate said, “I love people, and every one is a child of God. I don’t gotta like what they do, but I love seeing them out having fun, no matter what nationality.”

He declined to speak on the record, but the officer said, “ We’ve never had any problems [at Latino Fest], at least in the last four or five years, I’ve worked every one.”

The reason Durham puts on the festival is simple, said Booth: “The purpose of the festival is to invite all people, from all different groups, to come out and share Hispanic traditions and folklore. But also, we want to share information about the city’s resources, and different agencies and vendors from the Durham area that might be of interest to the Hispanic community as well.”

There were several vendors looking to recruit bilingual professionals for jobs with employers like the Durham VA Medical Center and the Durham Police Department.

J.V. Fountain, of Durham Police Department’s recruiting unit, was there to find “quality men and women who would like to serve the City of Durham.”

Fountain said, “We are always looking to promote diversity on the police force because Durham is a diverse city…this is the best way for us to meet people, and be able to have them ask us questions face-to-face.”

Festival organizers said that recruiting volunteers was no problem.

Yessica Vargas, 17, was volunteering at the inflatable “bounce house,” and has volunteered at similar festivals held in Cary and Chapel Hill, as well as with Habitat for Humanity.

Vargas said, “I like to be involved in the community, and volunteering you get to do things you wouldn’t normally do.”

Sandra, 14, volunteered with a group from Immaculate Conception Church, 810 Chapel Hill St., she was at a tent sponsored by Home Depot, helping younger children nail together little wooden bug houses, and attach window-screen roofs with thumb-tacks.

Sandra said, “When I was small I saw other people volunteering [at festivals] and I thought it would be fun. It’s fun for me to help kids have fun and be active, and learn how to build stuff.”

There were many other vendors including Univision, La Conexion, Hendrick Auto, the Scrap Exchange, the Eno River Association, several artists selling homemade jewelry, and of course food trucks.

A papusa is a Mexican dish that includes a round, flat pastry that is stuffed with beans and cheese and served with pickled cabbage. The papusa were a one of many regional and Latin-inspired foods available.

Maloney was at the festival to play guitar with the band Tercer Divisa, a Latin-influenced band that draws influence from musical styles from around the world. Apparently, they play everything from heavy metal to pop, depending on the event.

Tercer Divisa’s other guitar player, Cyndra, said, “When we play at clubs, that’s when we can get a little crazier; people slam dance and everything. Today we stuck with a more pop sound; you’ve got to play what the people want to hear.”

There were five bands that played throughout the event including traditional flamenco, mariachi, cumbia, rock and pop.

The Durham Latino Fest takes place near the midpoint of Hispanic heritage month, a celebration, which was officially started via proclamation by Mayor Bill Bell at the City Hall meeting on Sept. 15.

Community Health Specialist Yholima Vargas spoke in response to Bell’s proclamation on behalf of Durham’s Centro Hispano, “Although there is so much more to get done towards the growth and integration of the Hispanic/Latino community in Durham, it is clear that the City is working diligently to change our shortcomings and to build our strengths as a city and, more importantly, as a community.”

Centro Hispano Coordinator Jose Alegria said, “It means a lot [to Durham’s Hispanic population], it means they are recognized as citizens and members of the community; it recognizes their contribution to the culture of the City of Durham.”

Edelmira Palomo was at the festival to work, but that didn’t stop her from wearing a long red skirt and bright floral blouse while helping people understand the benefits of Durham’s One Call.

“I’m here to answer questions about a very important service for all citizens of Durham,” Palomo said, “Residents can call to request city services, and they will be connected to the right person in the right department to take care of street repairs, problems with their water bill, or anything like that, and often this can make the city aware of problems that require bigger repairs.” 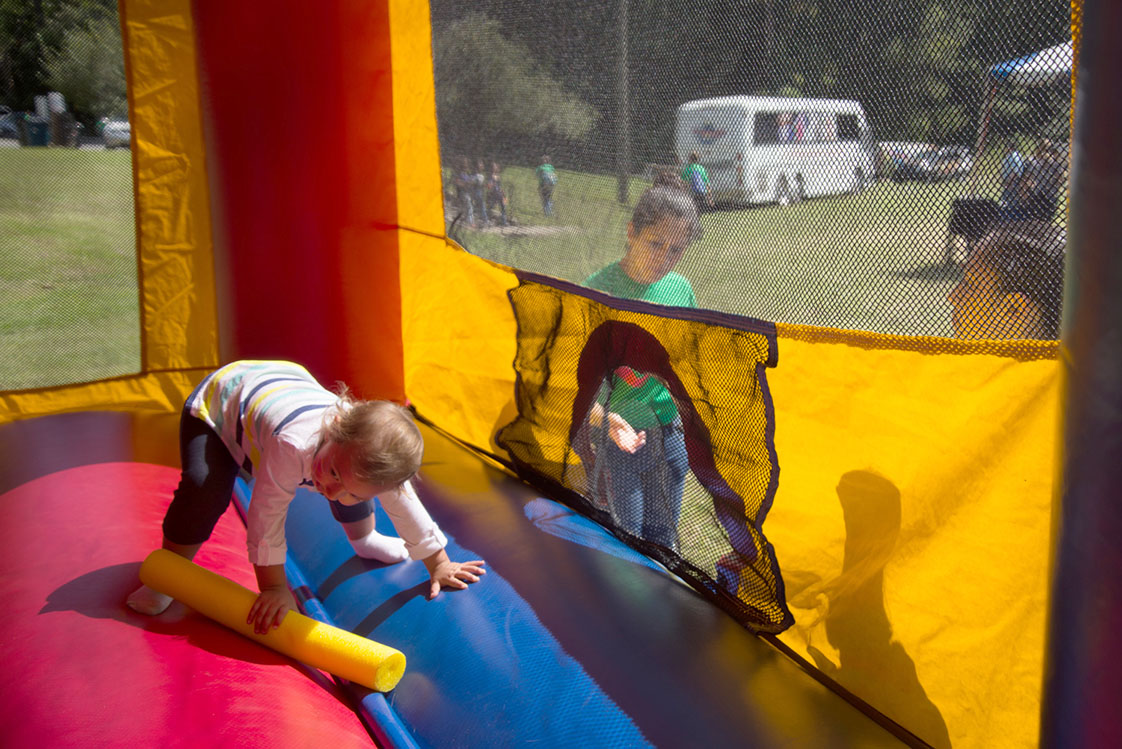 Volunteering is a family affair for Dariana, 18, and Yessica, 17, Vargas, who watch as Anita, 2, enjoys her first festival experience in the “bounce house” at Durham’s Latino Fest on September 27. Dariana said, “I like giving back to the community, [volunteering] is like giving a little happiness.” (staff photo by Robert Berges)

Robert serves as photo editor of the Durham VOICE on the UNC-Chapel Hill team. He is a senior photojournalism major from Rochester, N.Y.