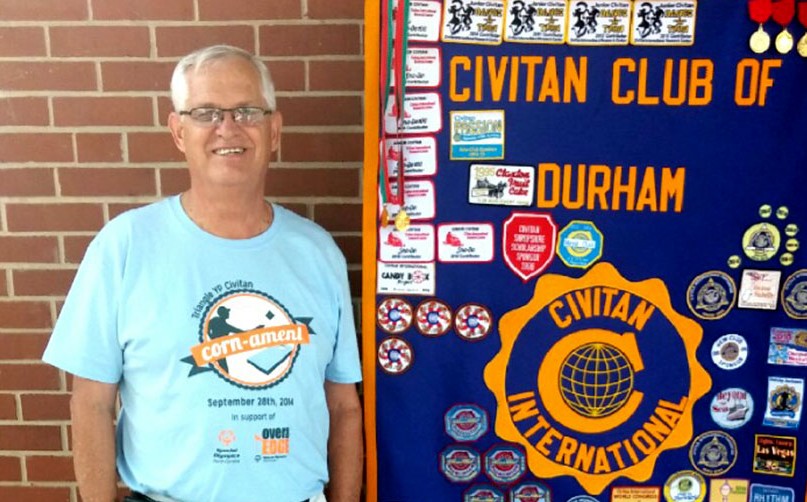 Civitans from Raleigh and Durham joined together at Shoeboxed on Broadway Street this past Sunday to raise money for the Special Olympics in their first annual Cornhole tournament: the Corn-ament. 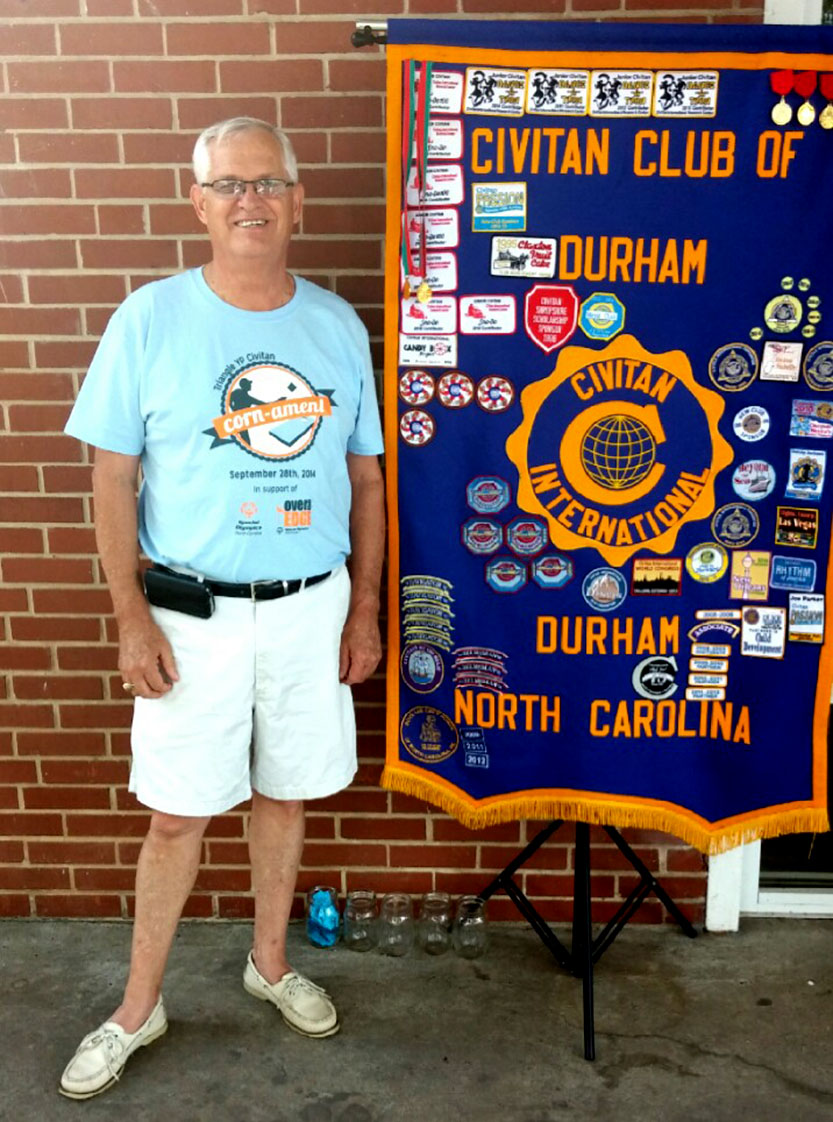 Previous international president of Civitan, Joe Parker, stands proudly beside the Durham Civitan banner which depicts his years of service to the Durham community. (Staff photo by Sarah DeWeese)

Civitan is an International service organization with hundreds of thousands of groups located in 40 nations. But this group, is located in Raleigh and had the strong support of the Durham chapter member and previous International President, Joe Parker.

Joe Parker was born and raised in Durham and was the international president of Civitan from 2012-2013. He came out to support the Raleigh chapter on Sunday as a current member of the Durham Civitans. The Durham Chapter actually donated $500 to the Corn-ament in order to get the ball rolling in an effort to raise as much money as possible for the Special Olympics.

The Durham and Raleigh Civitan clubs did numerous community service projects over the years which are featured on the club banner.

Based on the dozens of patches which display the Durham chapter’s projects, they were most involved in the annual dance-a-thons  and Candy Box Projects which benefit the Civitan International Research Center.

“When I was president, in 2012 and 2013 the Civitan motto was ‘Civitan passion speaks with action,’” he said, “then it was ‘Hometown Heroes’ for this year and I believe that Jay, the next president of Civitan International, is changing it to ‘I’m Civitan Happy,’” he chuckled.

Joe Parker traveled all over the world as a Civitan leader talking to the many groups about how to best serve their community as well as showing his appreciation and support for their work. 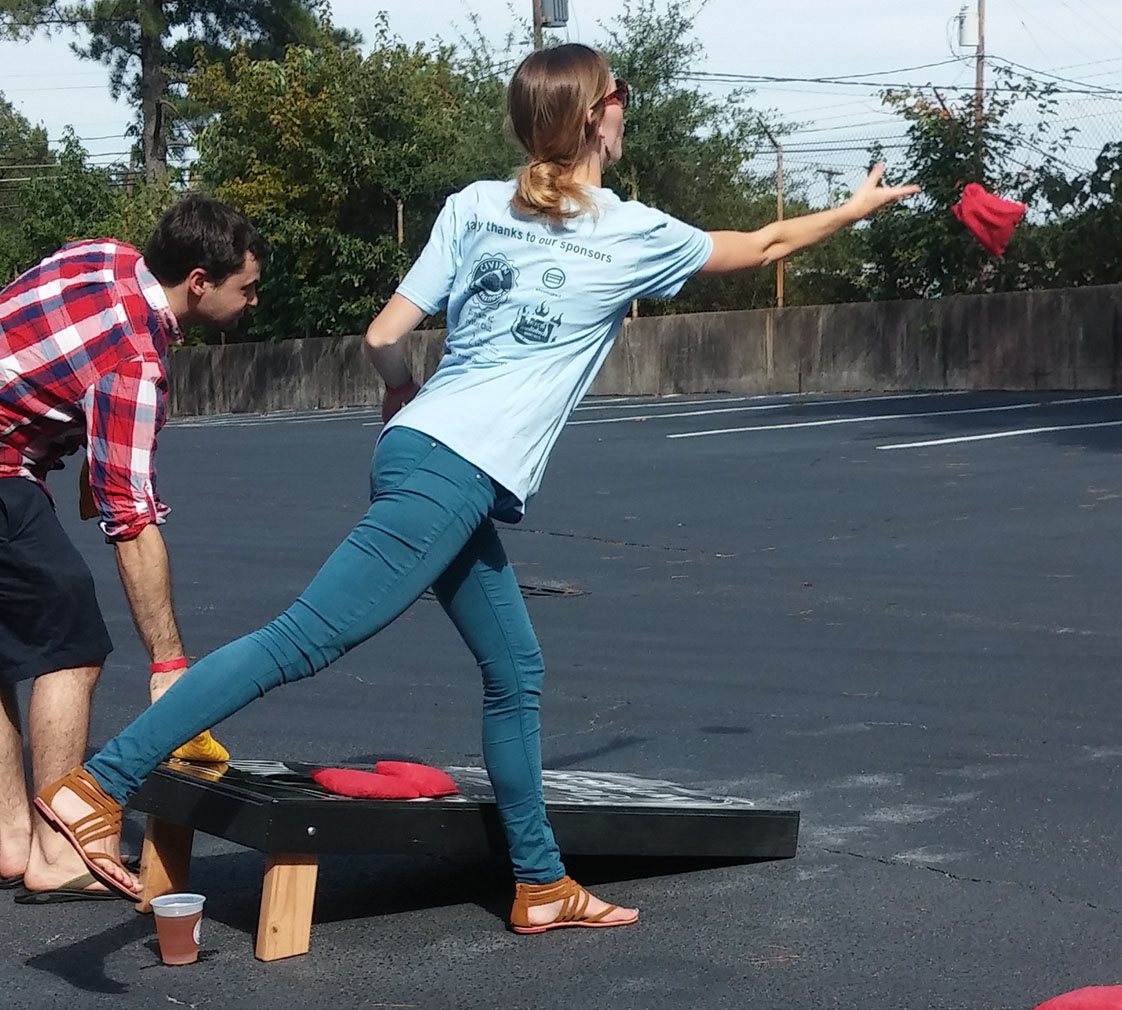 Fourth round of the tournament, President of YP Civitans, Addie Thornton, shows excellent form while raising money for the Special Olympics. (Staff photo by Sarah DeWeese)

He said, “You can get involved wherever you live. This event is for the Special Olympics but we really try to help other groups as well. In Durham, we have raised awareness for autism in the past and the men’s shelter and other things as well.”

Taylor Simpson, the director of fundraising, explained what the Triangle YP chapter was like. “We’re basically young people connecting through service and networking with each other. This chapter was just started last fall though, so we haven’t had a Corn-ament before. The idea is that we are going to make this an annual event.” The board came up with the idea together when they were brainstorming ideas to get members entered in Over the Edge.

“Over the Edge is this event designed to raise money for the NC Chapter of Special Olympics,” Simpson explained. “It’s where people donate $1,000 and get to rappel down the Wells Fargo building in Raleigh.”

The president of the Raleigh YP Civitans, Addie Thornton, showed equal enthusiasm for the cause. “We have a lot of people donating from the Durham and Raleigh area so we are doing pretty good in terms of actually raising the money,” said Thornton. “I might need to double check but I am pretty sure we raised around $2,000 so far, which means we can draw two names out of a hat next week for Over the Edge,” she explained. “It is going to be so much fun.”

Local businesses such as Nicklepoint Brewery, Love Loaves, and American Meltdown were present at the tournament and contributed to the cause. People from Nicklepoint donated a keg which was then used to raise funds at $10 per person for unlimited beers and Love Loaves promised to donate 20 percent of their proceeds to the fund. Other businesses such as Cocoa Cinnamon and the Pit donated items for the raffle that was called out throughout the event.

Over the Edge will take place next Saturday, Oct. 4 at the Wells Fargo Capitol Center 150 Fayetteville St. in Raleigh where you can see the two lucky Civitans and other locals rappel down the 30-story building. No better way to watch Civitan passion put into action as they raise money and awareness for the Special Olympics.

Previous international president of Civitan, Joe Parker, stands proudly beside the Durham Civitan banner which depicts his years of service to the Durham community. (Staff photo by Sarah DeWeeese)

Sarah serves as the social media editor of the UNC-Chapel Hill team, Durham VOICE. She is a senior journalism advertising major from Chapel Hill.