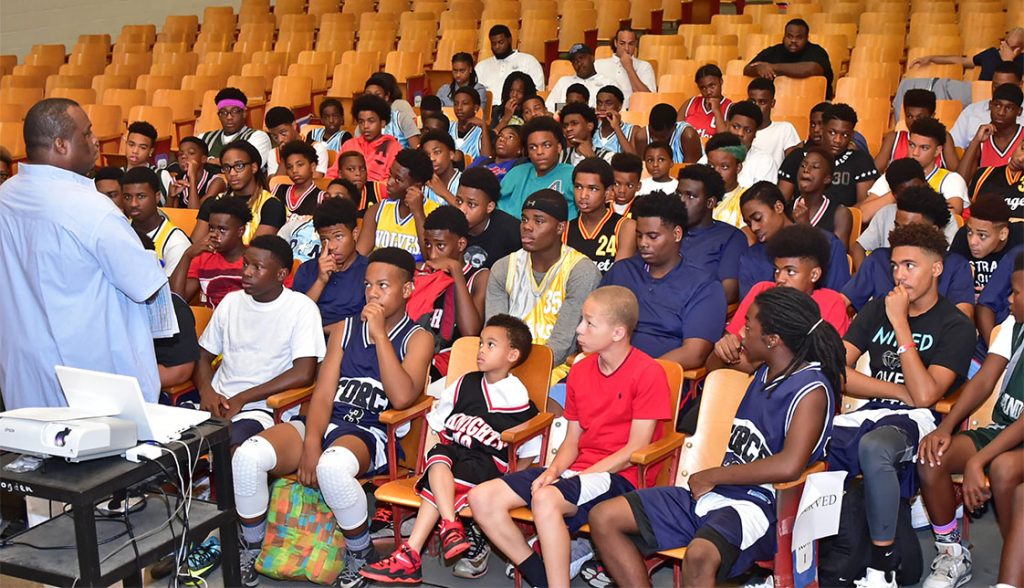 A summer basketball league calls to mind the squeaking of sneakers, the sound of the whistle blow, and the swish of the ball going through the net. But for participants in Campaign 4 Change’s summer league, it meant much more.

DONS Basketball League (DBL) provides a 12-week summer basketball league during June, July, and August, at no cost to its participants. Founder Otis Lyons, or “Vegas Don,” says that the league provides an “authentic NBA experience.”

“Our coaches scout players, come together and decide on draft picks, and then have a formal draft, just like in the NBA,” Lyons said. 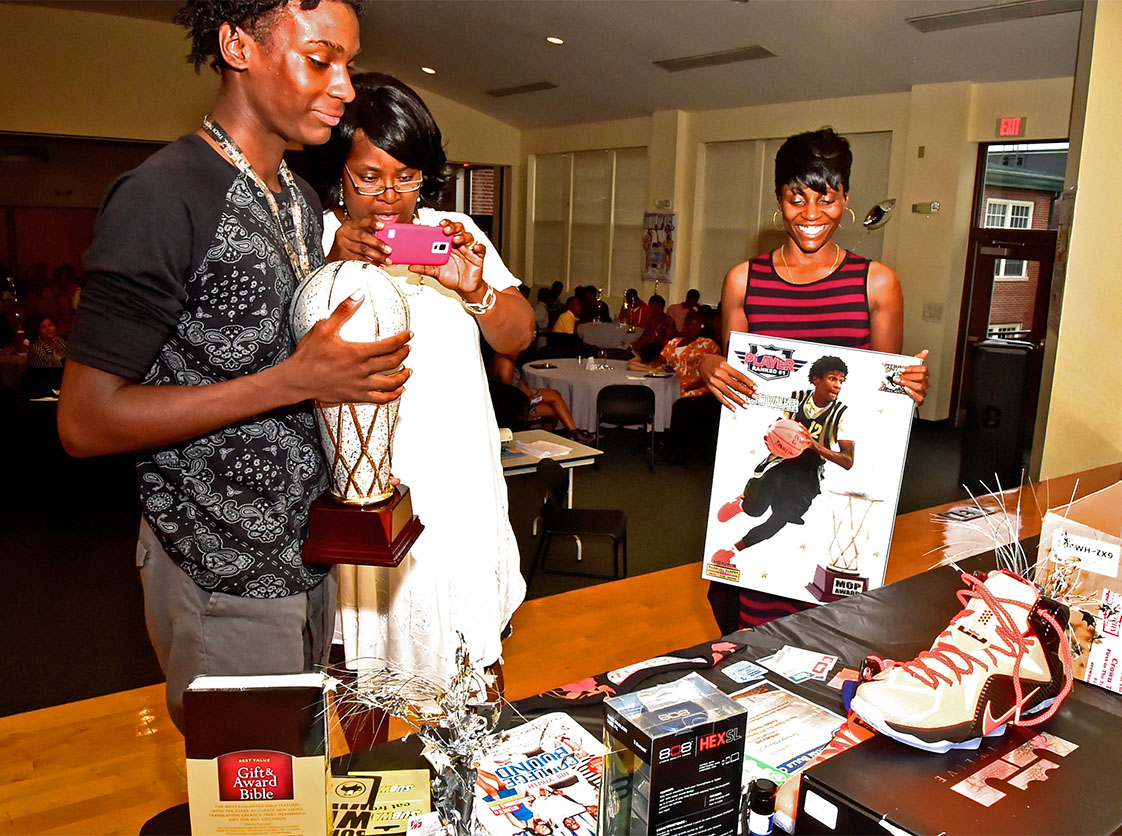 Edward Walker, DBL Most Outstanding Player Award recipient, admires prizes he received from the DBL for his achievement. Walker’s mother, Mrs. Olympia, holds a poster of Walker as DBL team mom Gwendolyn Daye captures the event with a camera. (Photo courtesy of DBL)

“Say a coach is in need of a forward,” Lyons said. “He can just trade a player with another team.”

The league provides a live DJ and in-game commentators, and players even had the chance to perform in front of the camera, with the season opener broadcast on FOX50, Lyons added.

The DBL also has its own magazine, in which teams and players are recognized for their performance. The league’s game results can be found weekly in The Triangle Tribune, The News & Observer, and The Durham Herald-Sun.

But the on-court experience is just one small part of the summer league. Players are required to complete community service and attend educational workshops.

“We just received some funding from Duke Energy, which allowed us to hire someone to teach a STEM class,” Lyons said. “We still teach career trade, but our focus is now more on the STEM program.”

Players’ participation in community service is a way to help the community, Lyons said.

“We wanted our players to be able to play for free,” Lyons explained. “So the mandatory community service is a way for them to pay, not with money, but by giving back to the community.”

DBL 2015 Most Outstanding Player, Edward Walker, said he enjoys serving his community as a DBL player.

“It’s great helping out people. We get to play basketball but at the same time serve our community, and that’s a big help,” Walker said.

Above all, the DBL tries to instill within their players a sense of discipline and respect. Lyons said that the way they achieve this is through their no tolerance policy for misbehavior.

And although Lyons wants his players to enjoy the summer league, he will not hesitate to enforce his rules, he said.

“It’s about being very firm and strict in a powerful way that they can look up to,” Lyons said.

Edward Walker knows first-hand how important discipline is when being held to Lyon’s strict standards.

In 2014, Walker lost his basketball privileges because of an altercation.

“I went a little overboard and got too mad about what someone said to me, but I realized it was just part of the game,” Walker explained.

Walker returned to the league in 2015, winning the league’s highest honor for players.

“I learned my lesson and learned to overcome my anger,” Walker said.

In order for players to remember the lessons they are taught during their time in the DBL, the league created The Ten Commandments.

This includes commandments like honor your parents, be loving to your family, help someone, always finish what you started, and be a leader.

“They must learn those, and they must live by them,” Lyons said.

And it seems to work.

Three-year DBL player Tamarcus Davis said the changes he’s seen within himself go deeper than his skills on the court. To him, the league has helped him grow as an individual.

“I think I’ve matured a lot. It taught me that I can do anything that I put my mind to,” Davis said.

Davis aged out of the league this past season.

“It helped me grow as a person,” he said. “I learned the importance of responsibility and leadership.”

Davis said the experience of the DBL is more valuable than AAU or high school teams.

“AAU and high school ball are pretty much just about basketball,” he said, “but the DBL is more than just basketball. It’s about giving back to the community.”

Part of the reason players learn so much from their experience in the league, Founder Otis Lyons said, is that the DBL administers an exam to all players, at the end of the season.

“Players study the DBL 10 Commandments, the 15 Principles of Winning, and the information they learn in our STEM workshops,” Lyons explained. “And at the end of the season, they have to pass an exam in order to receive any awards.”

To Lyons, the most important thing is that the players learn something and better themselves. To him, it is essential that players know what his motives are.

“Our players also pay back by becoming productive citizens,” Lyons said. “When the kids can see that you’re not there for the money or for selfish gain, they will try to do everything they can not to disappoint you.”

Visit http://www.c4c4life.com/#! to learn more about the DBL. 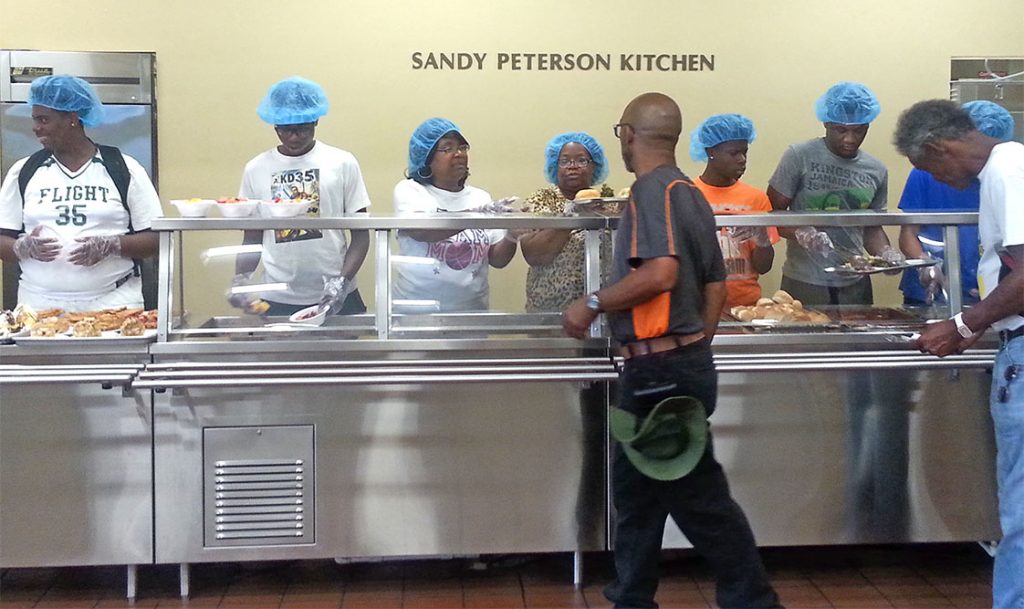 Players and team moms work the kitchen at the Durham Rescue Mission as part of the DBL’s weekly community service. (Photo courtesy of DBL)

Evan Owens of Murphy is a student at N.C. Central University and a staff writer-photographer for the Durham VOICE.