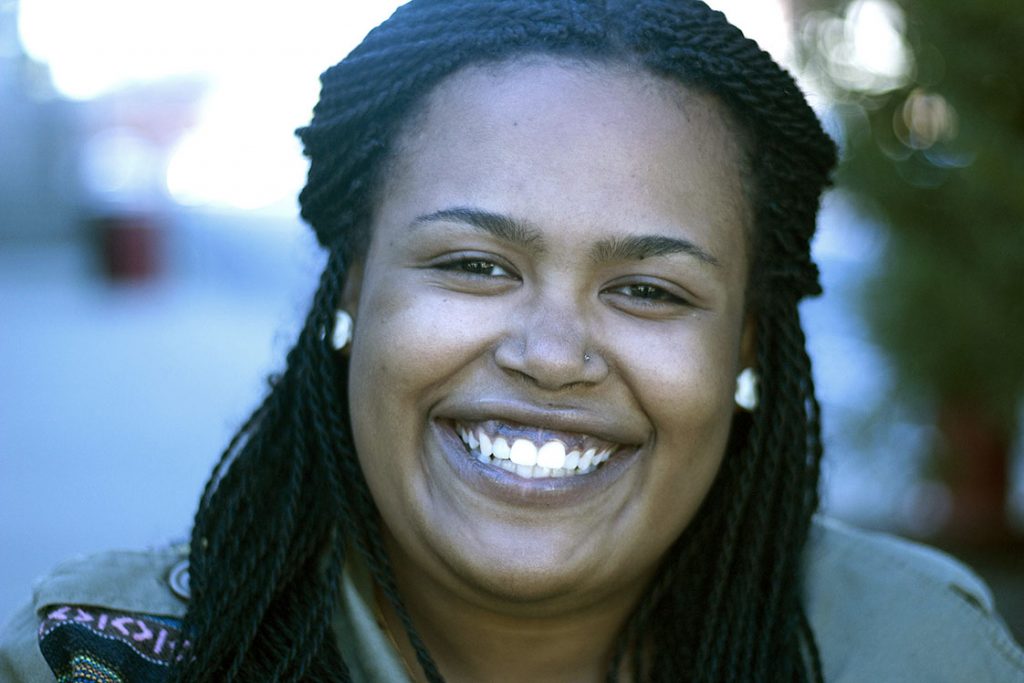 Kristine Royster is a senior at Hillside High School and a Partners for Youth Opportunity intern working with the Durham VOICE. (Staff photo by Carlton Koonce)

Most teenagers don’t care about what members of the city council do or say, however there are 32 youth that do care.

The Durham Youth Commission (DYC) is a city-funded council composed of 30 high school aged teens. This commission gives teens the opportunity to have a formal role in the city’s planning. The Durham Youth Commission focuses on a variety of problems ranging from abusive relationships to employment, that youth deal with. It also provides civic education and leadership opportunities.

The idea for the commission was first proposed to the city council in 2003 and, according to the city’s website, was instituted by Mayor Pro Tempore Cora Cole-McFadden.

DYC gives teens the chance to participate in service learning activities such as Mobile Market, a market taking place every third Saturday of the month and held at Duke Memorial United Methodist Church on West Chapel Hill Street. The Inter-Faith Food Shuttle donates a truckload of food, and over 60 volunteers hand out the food to more than 150 families.

As a member of DYC, I’ve been doing this service-learning project for the past three and a half years, and it is one of my favorites. When volunteering like this, you get a chance to make someone’s life or day a little better than it was before.

I have been in DYC since my sophomore year, and it gets greater every year. Usually a student’s high school guidance counselor will recommend for someone to join and the most exciting part is getting inducted into DYC. You get a chance to be on television, on the People’s Channel, and you also get a chance to meet Mayor Bill Bell and other city council members. For me this has been a wonderful networking opportunity. I believe the purpose of the Mayor and county commissioners is to work on county issues and make Durham a better place. The value of knowing people like this is great because they’re there to help the community. The purpose for the Durham Youth Commission is to give Durham youth and voice and to work on local social issues involving the community.

We also have a number of conferences that we attend throughout the term which last for a full school year. The conference I enjoy the most is the Youth Legislative Assembly (YLA) that brings together over 100 teens from all over North Carolina to perform a mock legislative session in Raleigh. It was during this mock session that I learned Roberts Rule of Order, and how the process of bills becoming laws work.

Overall, the Commission is something that I highly recommend every teen to look into. Besides enjoying meeting new members every year, one thing that stands out to me with this year’s DYC group is the amount of diversity of kids on the commission. This makes everything more exciting for everyone.

Kristine Royster, a senior at Hillside High School, is a Partners for Youth Opportunity intern working at the Durham VOICE.