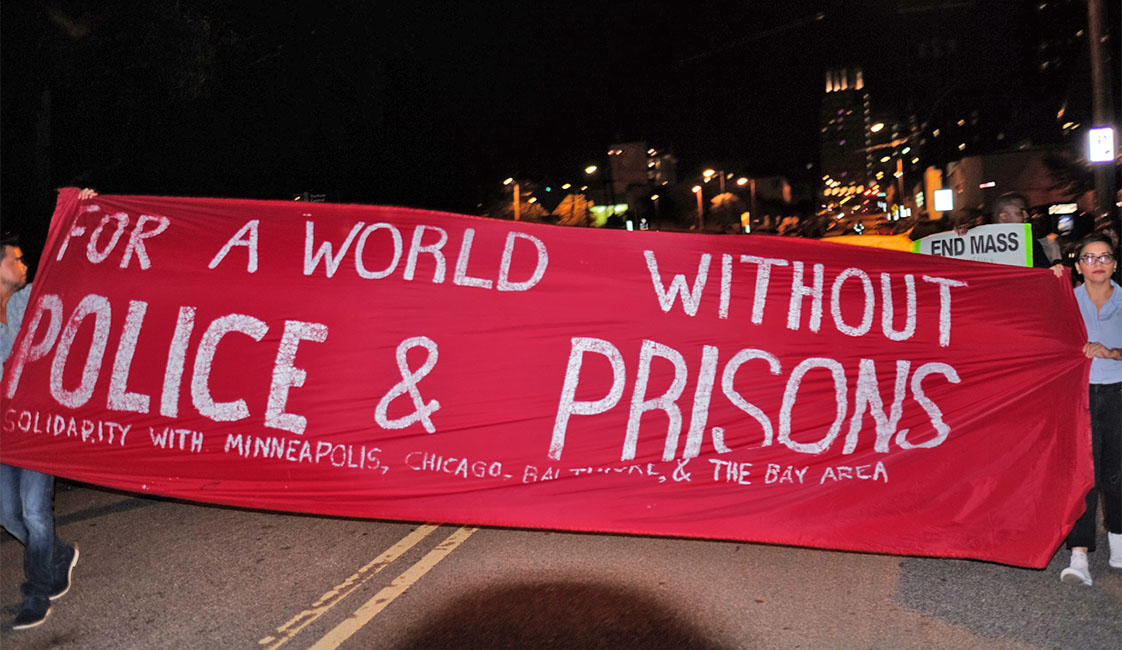 Protestors with the Inside-Outside Alliance marched in downtown Durham during a rally on Sept. 9, 2016. Protesters gave speeches and chanted outside the Durham Detention Facility and closed an access ramp to the Durham freeway for several minutes on. These protests prompted the HRC town hall meeting. (Staff photo by Jordan Wilkie)

The Inside-Outside Alliance, an activist group including incarcerated and formerly incarcerated members, has been holding rallies and marching through downtown Durham for two years over complaints about the jail’s food quality, misconduct by correctional guards, poor medical treatment and high prices for commissary items and phone calls. Major Paul Martin from the Durham County Sheriff’s Office, which runs Durham County Detention Facility, repeatedly challenged the activists’ assertions of mistreatment in the jail during the contentious town hall meeting.

“What we’re hearing now, and I’m going to defend us because I need to, is a bunch of overblown, distorted lies,” Martin said.

Accusations of misconduct went both ways. Community members cheered when a formerly incarcerated man called the sheriff’s office an organization of Klu Klux Klan members and made claims that jail staff threatened to electrocute him.

Martin, who is black and was a victim of KKK intimidation as a child, said violence in Durham would not stop as long as community members enabled people who commit crimes by making excuses for their behavior.

The Durham HRC mediates conflict in the community around racial tension by bringing involved parties together in public forums to resolve complaints, according to their website. No resolutions were proposed or agreed upon at Thursday’s town hall. Disagreements over the legitimacy and interpretation of investigations of jail conduct left Martin and community members talking over one another, prompting HRC moderator Yolanda Keith to intervene.

According to a report read by the HRC’s Felicia Arriaga, approximately three out of four people in the jail are not considered violent, based on the jail’s own housing classification system. Umar Muhammad from the Southern Coalition for Social Justice and Cynthia Fox from the Inside-Outside Alliance pointed out repeatedly that many people are incarcerated for an inability to pay for child support or other fees. Chief District Court Judge Marcia Morey, who also sat on the panel, stressed the importance changing the practice of jailing people for poverty-related issues.

“We don’t want debtor’s prison. If you don’t have the ability to pay, don’t put them in jail for failure to comply,” Morey said.

Morey said she was surprised when she learned that almost three-quarters of people in the Durham County Detention Facility have not faced trial.

Morey highlighted that, though Durham County’s population is growing, jail intakes are decreasing. Morey is leading two efforts to keep that trend going. If someone misses their court date, they are issued a warrant for arrest, even if they were in the hospital or had other unforeseen conflicts.  Morey says she reviews “blue sheets,” or written excuses for why people have missed their court dates, every night in an effort to keep people out of the jail.

“We’ve reduced jail intakes by at least 15 percent, because people have things come up,” Morey said. “How can we be more understanding?”

Morey is also an advocate for the Durham County Misdemeanor Program. North Carolina is one of two states that treats 16 and 17-year-olds as adults in the criminal justice system. The program was designed to keep these young, low-risk, first-time offenders out of the jail by referring them to a community diversion program instead of putting them behind bars. It has been such a success, said Morey, that the program now serves young people up to age 24.

Of the panelists, comments from Martin stirred the loudest uproar.

Martin played on both sides of the debate. He referenced the obstacles people from low-wealth, black communities face.

“The whole thing is rigged against you,” Martin said.

However, Martin did not concede that the jail held responsibility for any of the complaints. The jail is limited by the contracts it makes with companies, he said, and by state and federal regulations.

Regarding complaints about food quality, Martin pointed out that the sheriff’s office recently hired a new contractor, ABL Management, Inc., to provide food for the jail. For complaints over high prices for phone calls, Martin said they follow FCC standards. For complaints about substandard medical care, Martin said he was not a doctor and referred the audience to Correct Care Solutions, the jail’s contracted medical care provider.

“Your problem is with the system, not the Durham County Jail,” he said.

At another point, Martin insisted that the jail was doing its job and complaints were better lodged elsewhere.

“The jail does not lock you up,” Martin said, “The judicial system locks you up.”

Jordan Wilkie is a first-year master's degree student at UNC-CH. The Dallas, Texas, native is serving on the VOICE as a staff writer-photographer.