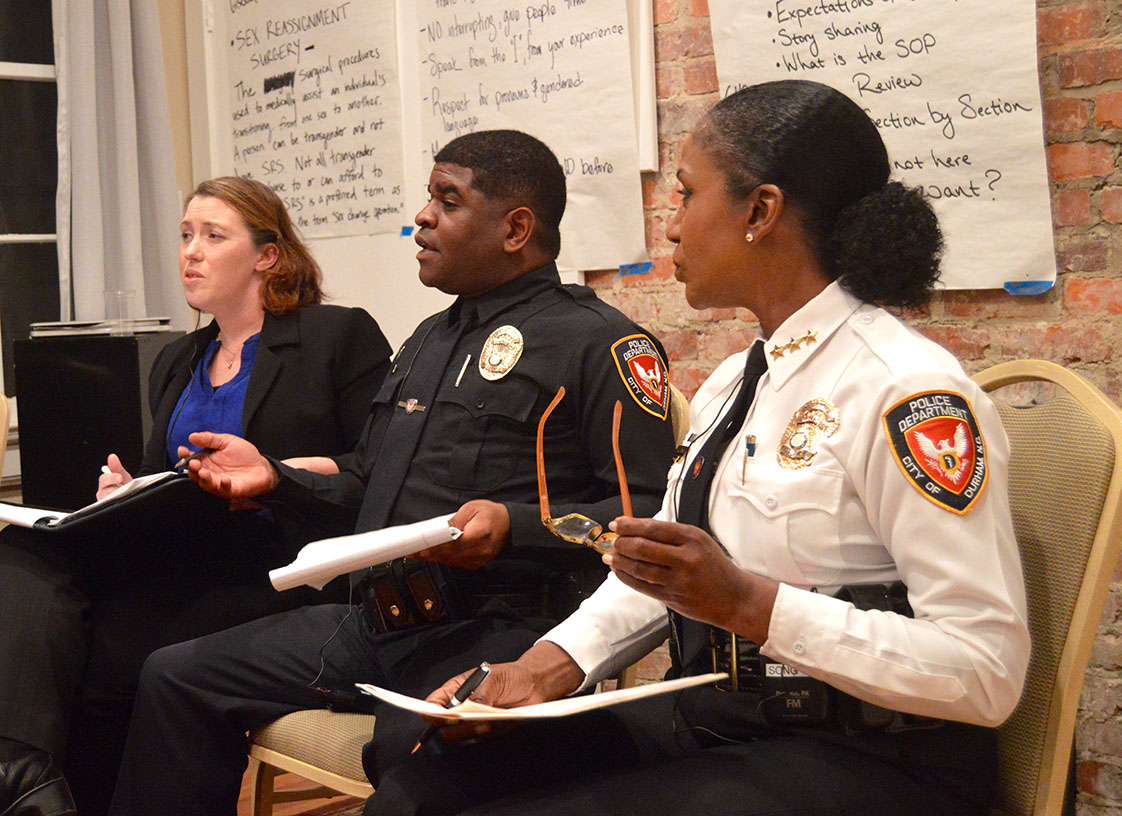 The LGBTQ community  in Durham “is by no means a monologue,” according to Helena Cragg, board chair of the LGBTQ Center of Durham. There are a wide variety of perspectives LGBTQ citizens can bring to the conversation and the center has worked with the DPD to outline the needs this community has in order to feel heard and represented.

Among these needs was the creation of Officer Strickland’s position and the implementation of new standard operating procedures dealing with LGBTQ community members. Strickland will be the point of contact for anyone with questions or concerns about LGBTQ police relations. Officer Charles Strickland has served Durham citizens for the last four years in the DPD and five and a half years prior with the Durham Office of the Sheriff. He was selected for this position by new police chief, Cerelyn Davis, who recently moved to the DPD from the police department in Atlanta, Georgia, where similar strides are being made for the LGBTQ community.

Strickland said, “There was nothing like this here at all when she got here and the community itself was asking for somebody who could be more accessible, someone who could identify with the community and outreach to them.”

The new SOP, also known as a general order, states the appropriate ways to interact with Durham citizens who are transgender, intersex and non-gender conforming, including using the correct pronouns and other practices for dealing with situations as to not offend anyone.

Chief Davis explained, “This is really a guide for our police officers so they don’t offend people by assuming that everybody fits in a particular space and there are so many variations of what is specific to me, you know, that’s different for you.”

The policy was drafted in response to a myriad of community engagements. The DPD received complaints about offensive and assumptive pronoun usage by officers. Southerners on New Ground (S.O.N.G.), a regional Queer Liberation organization, took two years surveying and interviewing young LGBTQ community members and many indicated they didn’t feel safe around law enforcement.

Serena Sebring, community organizer for S.O.N.G., said, “The result of those listenings led us to ask for the introduction of a policy here that was modeled after one put into place by the Atlanta police department after significant community pressure was put on to change those interactions and give some protections and measures of accountability.”

A community forum was held Sunday, Oct. 2 at the LGTBQ Center of Durham where citizens could express concerns or changes they wish to be considered for the draft policy. Much of the feedback from the community regarded the wording and terminology in the definitions outlined in the policy for terms such as gender identity, gender expression, gender nonconforming, and intersex. Citizens expressed much of the language used in the definitions and policy perpetuated binary gender ideals, which is what the department is trying to overcome. Chief Davis and her counterparts will be editing the draft policy with consideration of input from Sunday.

Citizens expressed the explicit inclusion of “they”/”them” pronouns in the policy as well as possibly including a list of appropriate pronouns to use.

“We want this policy to not be outdated tomorrow,” responded Diana Palladino, accreditation manager for the DPD. “As new stuff is developed, new research, people come up with new expressions that they would like, we can incorporate that into training while that all falls under the language in the policy.”

Chief Davis also addressed concerns about citizens who prefer to be called “sir” or “ma’am,” compared to individuals who would be offended by those titles. According to Davis, officers are trained to use “sir” and “ma’am” and the department is assessing how to find the appropriate balance, policy-wise, between these two preferences.

“When you think in terms of officers having to address the entire public, we have to make sure that in an officer’s attempt to make sure they are addressing individuals appropriately,” Davis said. “We have to identify some very generic ways where they don’t offend other people as well.”

Paired with the implementation of the policy, officers will be trained in a classroom setting about the new operating procedures. Davis is considering having people from the LGBTQ community share testimonies or anecdotes to give the officers personal perspectives.

Davis explained, “As we move into contemporary styles of policing, we have to communicate, and we have to be able to reach out to all publics, all communities, no matter what. If we don’t shift and extend the olive branch to our community, we cannot be successful.”

Citizens can obtain a draft of the policy or suggest changes to the policy by contacting the Durham Police Department through the following:

Meredith Wilson is a UNC-CH junior majoring in editing/graphic design and media production. For the VOICE she is serving as a staff phographer-writer.