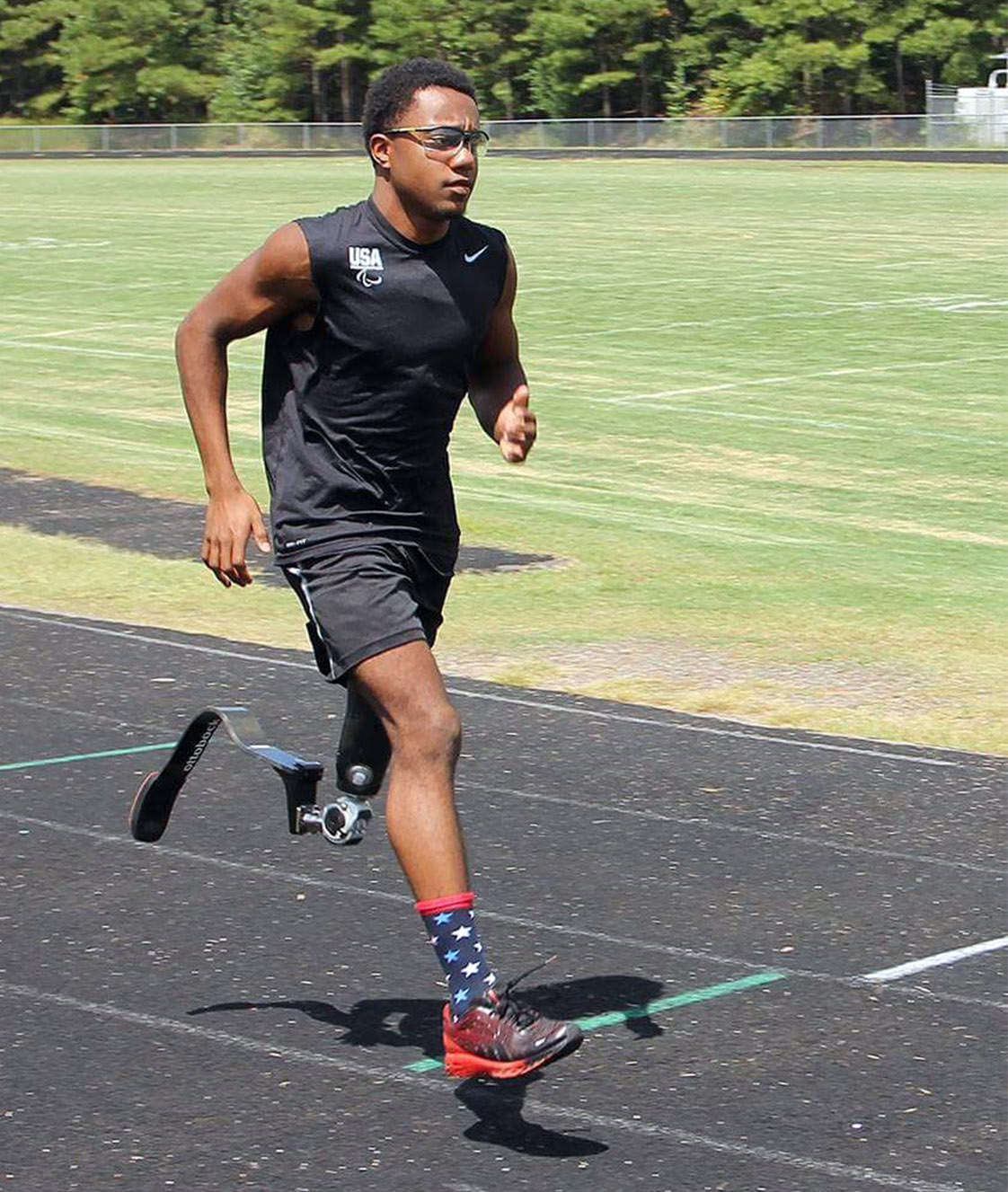 Prior to major events, Jackson trains twice a day with his coach Jamaal Daniels. (Photo courtesy of Deborah Jackson)

Jackson competed in the 100m and 200m sprints, as well as the long jump in the T42 category, which is for athletes with single above-the knee-amputation. Jackson, whose leg was amputated before his first birthday due to a birth defect, said, “It was a really great experience… a once-in-a-lifetime thing.”

This month the high school senior will be receiving a Rising Star award, an award presented to a Challenged Athlete Foundation Athlete who has “demonstrated extraordinary amounts of strength, resilience and guidance.” (Photo courtesy of Deborah Jackson)

As a child, Jackson tried out soccer, football, basketball, baseball, tennis, and even horseback riding, before finally settling on track and field.

His mother, Deborah Jackson, worked in prosthetics when Jackson was a child and after seeing a picture of children with amputated legs running across a field with running blades, she said she made it her goal to make sure her son would receive a running blade as well.

Deborah Jackson contacted the Challenged Athletes Foundation (CAF), a non-profit organization that offers support to physically challenged persons, several times before the the foundation finally contacted her back, she said.

After contacting her, the CAF invited her and her son to the Best Triathlon in San Diego where he received a running blade and competed in a children’s event called the fun run.

For his part, Jackson says he wants to bring awareness to the Paralympics and other adaptive events in the U.S., where the level of awareness surrounding adaptive sports isn’t on par with that of some European countries.

“People might see someone in a wheelchair and think they are handicapped and don’t do sports,” he said. For Jackson, his disability has become natural.

His coach, Jamaal Daniels, agrees. “I don’t see there are challenges for him. This is regular. He doesn’t have a disability.”

Jackson said his coach tries to make balancing training, school and being a regular teenager as easy as possible for him.

Prior to the Paralympics, Jackson was training twice a day. For now, however, they have cut training to once a day, getting in both weight training and track workouts in the evenings.

But training isn’t the only extracurricular activity the world-class athlete has to balance. On Friday, he returned from a trip to Washington D.C. where he met President Obama. “It was an amazing experience,” he said.

Despite his accomplishments, Jackson says he is still a normal teenager who likes to hang out with his friends when he has free time. Though he isn’t sure if he’ll be in town for Hillside’s homecoming dance this year, he says, “I’m definitely going to prom. That’s no doubt.”

Daniels described the high school senior as a typical teenager who is growing up and learning about himself.

His mother, Deborah, agrees. “He is getting senioritis, he hangs out, plays video games, but so much of it is overshadowed by the fact that he does so many national and international events,” she said. “He has to find a happy medium.”

As for his athletic ability, Daniels said, “He realizes he can compete with anyone. But he needs to mature a little. He understands he has a few mountains to climb, because he hasn’t experienced competing consistently.”

But Jackson is not slowing down anytime soon. On Oct. 20, he will attend the San Diego Triathlon Challenge in San Diego, California, where he will receive the Rising Star award.

The Rising Star award is presented every year at the San Diego Triathlon Challenge to a “CAF athlete who has demonstrated extraordinary amounts of strength, resilience and guidance,” according to the Challenged Athlete’s Foundation’s website.

Jackson says he plans to continue training and has his sights set on the the 2020 Paralympic Games in Tokyo, Japan.

L'erin Jensen is a UNC-CH first year graduate student from La Verne, Calif., serving as the teen mentoring coordinator for the Durham VOICE. She is also a staff writer-photographer.