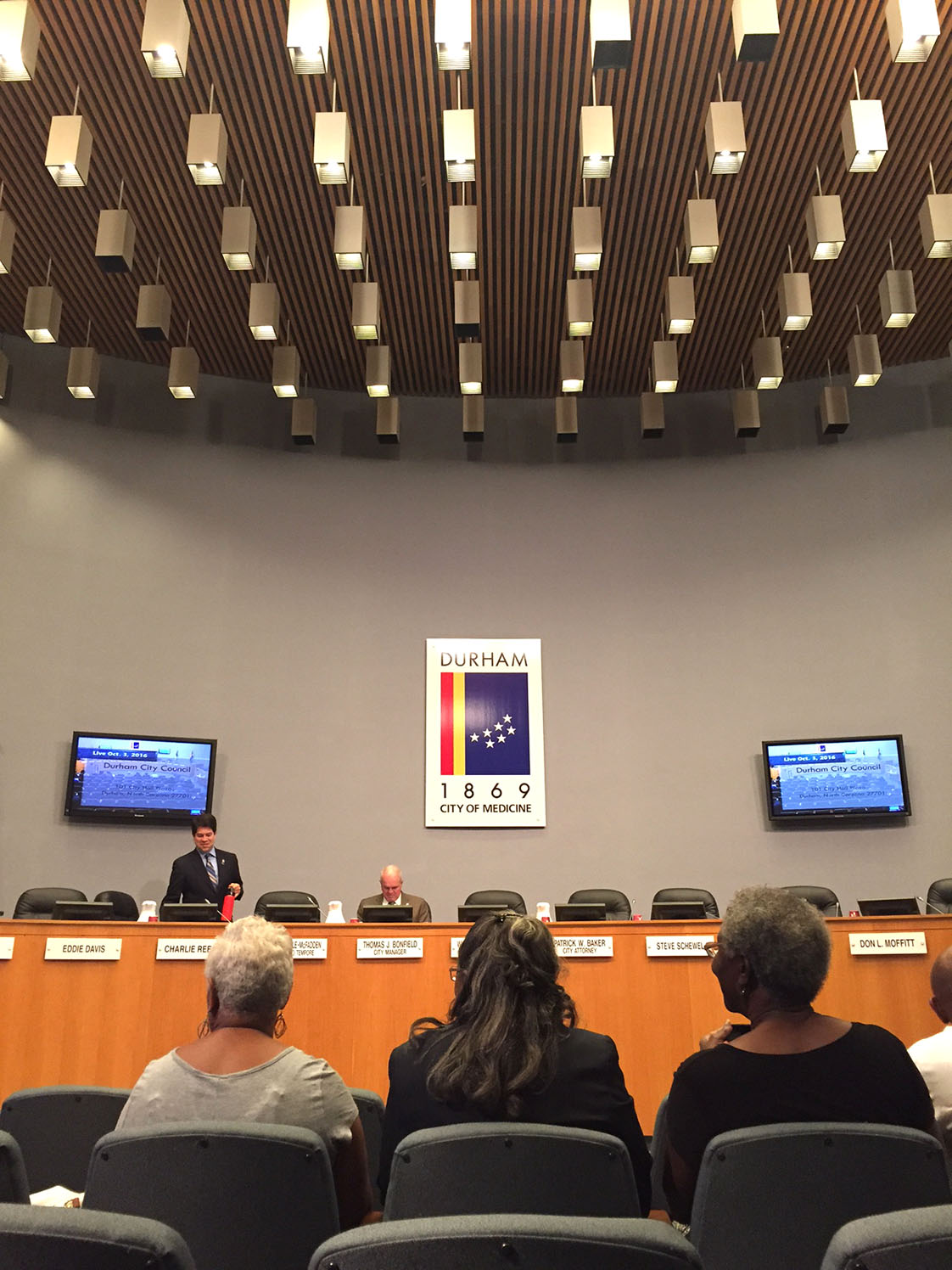 With a community gathering of about 40 citizens, the city of Durham held their biweekly City Council on Oct. 3 where they declared October Domestic Violence Awareness Month.

“Whereas anyone can be a victim of (domestic) violence, we believe that everyone deserves a life free of violence,” said Mayor Bell.

Mayor Bell continued by stating one in four women and one in seven men has experienced domestic violence in their lifetime.

“Domestic violence can lead to long term health problems, missed days of work, and the loss of employment, and homelessness,” said Mayor Bell.  In 2015, the Durham Crisis Response Center gave shelter to 155 women and children and has received over 2400 calls reporting domestic disputes.

Mayor Bell suggested that the Durham community needs to be educated on the issue of domestic violence in order to mobilize the community.  Eric Moore, chair of the DCRC, also spoke on the issue.

“As we move through this month, we are focused to provide hope to those who are victims of domestic violence in our community,” said Moore. “We want to shine a light to educate others on this very dark issue.

In other business, the Council recognized Desmond A. Jackson, a student at Hillside High School who was the youngest member of the Paralympic Track and Field team. He recently competed in Rio de Janeiro, Brazil for the 2016 Paralympic Games

“We wanted to uplift his achievements,” said Johnson. “We wanted to use his example for students. Challenges are actually opportunities in disguise.”

Jackson is the first amputee to run track on a high school level in NC. He was honored at city council by Mayor Bell declaring Oct. 3 “Desmond A. Jackson” day.

“I greatly appreciate this honor and I hope to continue to support Durham,” said Jackson. “I wouldn’t ask for anything else.”

Mayor Bell continued City Council acknowledging smoke alarm awareness. Bell states that one in three house fires are caused due to lack of a smoke alarm in the house. The mayor declared the week of Oct. 9th through the 15th as fire prevention week.

Concluding proclamations in City Council, Mayor Bell recognized the Durham Arts Council Board. Proclaiming October as National Arts and Humanities month, Mayor Bell had president of the DACB, Mike Woodard, to speak on behalf of the Durham arts community.

“I would like to thank the city of Durham the ongoing support of Centerfest,” said Woodard. He stated that Centerfest had 33,000 people attending, and over 150 artists.

Trevor Barnes of Charlotte is a journalism student at NCCU serving on the VOICE as a staff writer-photographer.