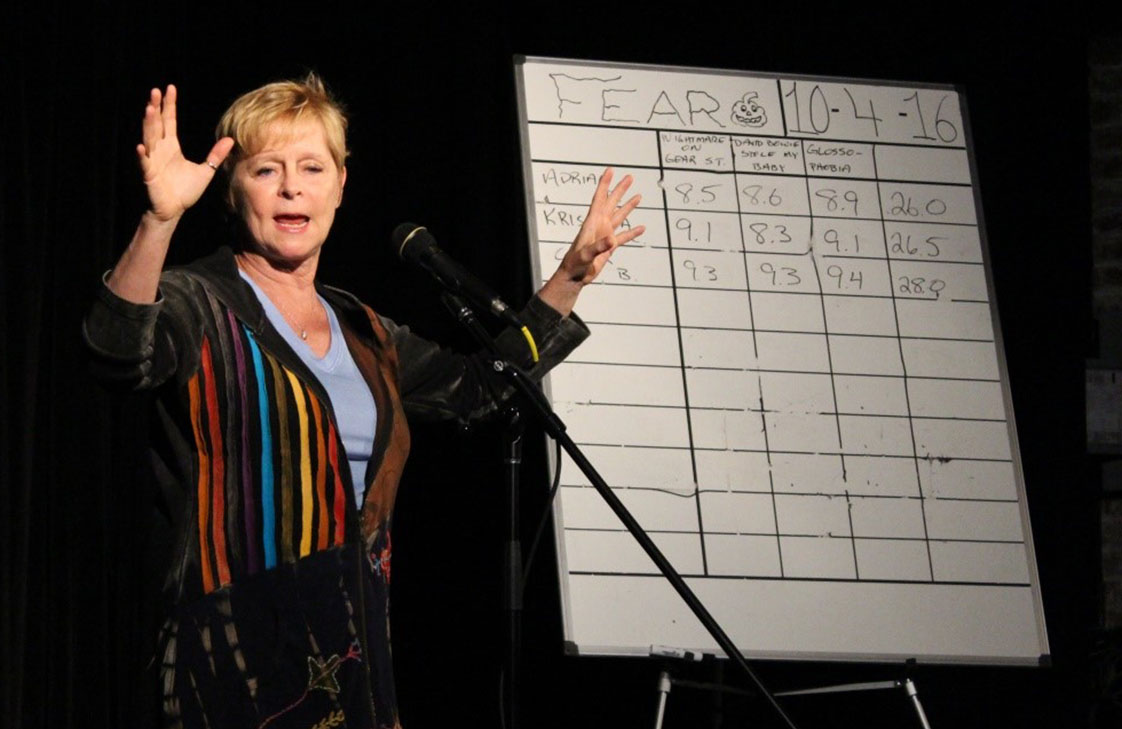 People chatted, laughed, and sat on the edge of their seats Tuesday night, Oct. 4, at The Monti’s fifth annual fear-themed “StorySLAM” held at the Motorco Music Hall on Rigsbee Avenue in Durham.

The “fear” theme allowed eight people who had registered get five minutes to tell their story to the local audience. The eight who were selected, were the lucky ones whose names were drawn from a hat.

Storyteller Jeff Shaw cracks the crowd up telling about his encounter with vampires. (Photo by Nijah McKinney)

The space began to quickly to fill with people, with a growing reputation for a promising show.

“Anyone who comes is definitely in for a treat,” said Julie Longland of Durham. “We’ve laughed and even cried at the stories. It really just depends on the teller. You never know.”

“Oh I’ve been like ten times before. The first time I came was an outdoor event about a year ago. It was amazing. My boyfriend actually told a story before. He did great. I’ve loved it ever since,” Kaylin Tsykayama of Durham, said.

“This is my first time here but I’ve been heard about it through a friend. Tickets usually sell out pretty fast. I’ve tried to come before, but I’ve always miss out trying to get tickets last minute. I’m pretty excited especially with the “fear” theme,” said Nicole Gognon of Cary with a smile.

The room was dim-dark with a tall, black stage in the front, and chairs set up everywhere around it. On the stage hung a huge “M” Motorco logo in white, a dry-erase scoreboard, and a mic.

String lights were hanging from the ceiling, and a large, silver disco ball hung from the center. Black curtains lined the brick walls, while vintage posters of old bands and musicians covered the rest.

A bar in the back of the room served as the second main attraction, keeping a line all night. The air smelled of beer, and food from the diner that was attached on the other side of the building.

The room buzzed with conversation, laughter, clinking beer mugs, and soft rock with the occasional acoustic guitar chiming through the speakers near the stage. Everything quieted as the show began.

Hosting was Ed Boltz, the chair of TheMonti, and introducing him was Jeff Polish, the founder of TheMonti. “I have always loved stories, and in my mind I always thought it’d be great if I figured out a way to tell them in this cool, interesting way. In my earlier years I traveled and ran into some other organizations that did it, and thought, ‘If they can do it, why not me?’ So I started this up,” Polish said.

TheMonti is a non-profit organization that invites people in the community to come tell their stories in an open, intimate setting. They have held shows all throughout the local area of Durham, Raleigh, and as far as Greensboro. They’ve been doing so ever since their first debuted show in April, 2008 in Chapel Hill, which proved successful after selling out.

After the storytellers are selected, three groups of judges are picked from the audience to pick a winner at the end. The judge groups named themselves “Nightmare on Geer Street”, “David Bowie Stole My Baby” and “Claustrophobia.”

The first storyteller up was Adrian Dunston, a middle-aged brown haired man who told about how we are often afraid of things that won’t happen. “Like Trump becoming president,” Dunston said, getting a cheer from the crowd. He was given a final score of 26.

Another storyteller, Blakely Blackford, a young brown-haired woman told a story about how there was a cockroach under her plunger for weeks that she was terrified of. “Did I forget to mention that cockroaches can live without food for a month, and without their heads for a week?” Blackford said with a twisted up face. She was given a score of 25.4.

Janine Latus was up next, with a story of how ‘her greatest fear came to pass’, her sister’s death by her husband. “We had to believe it wasn’t true. Until we found a note she’d written that said, ‘If you are reading this I am no longer living, he is the reason. Don’t let him get away with this.’” The audience gasped in disbelief. She was given a 28.7.

Following was Jeff Shaw who told of his experience trying the hallucinogenic mushrooms referred to as ‘shrooms’, and his horrifying experience on it, seeing vampires. “I just knew this was the end!” Shaw said with a scream making the crowd burst out in laughter. He received a 26.4.

Succeeding him was Steve D., telling of his scariest moment, trying to propose to his wife right after he’d recently lost his job. “The key to overcoming fear is that you don’t wait until you’re fearless to do things. Nineteen years later, my wife and I are still married,” Steve said hugging and kissing his wife at the end of his story. The crowd went wild with applause. Judges game him a 28.2.

The last, storyteller, Debbie Barret, ended the night telling of how she was almost raped once. The audience watched and listened on the edge of their seats. “I repeatedly screamed for help from my neighbors Christy and Larry. I don’t know if he let me go because I screamed so loud he was frightened, or because it might have actually been Larry that night,” Barret said. She was scored a 28.3.

It was then time to announce the winner. “Janine Latus takes the victory” host Ed Boltz said. Latus is now in the running to compete in TheMontiGrandSLAM where she will compete for the title of ‘TheGrandSLAMPION’.

Founder Jeff Polish closed the show announcing the next event to take place called “Into the Wild” on October 15, an outdoor event at the Forest Theatre, at Chapel Hill University. 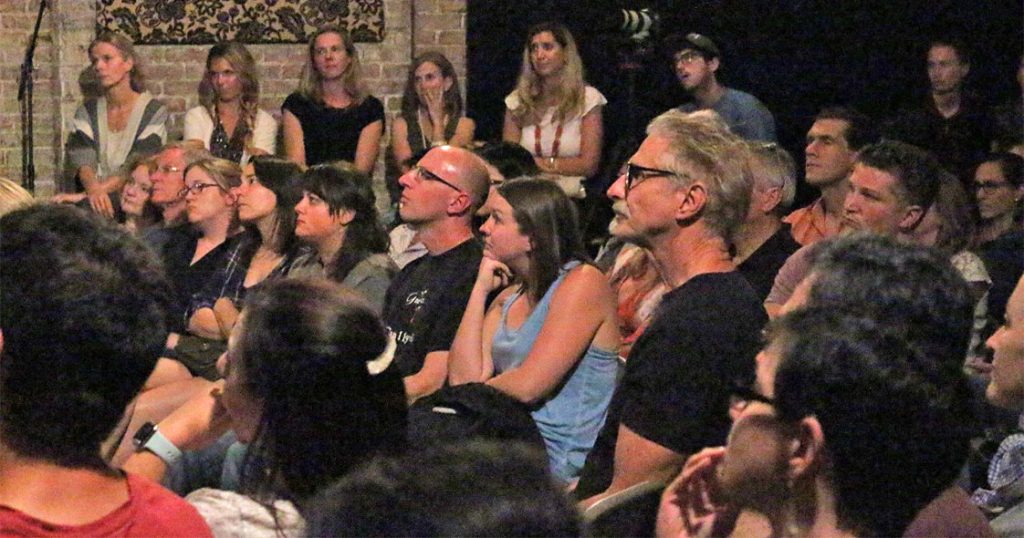 A packed crowd at Motorco listened intently as eight storytellers used the theme “fear” to entertain and in some cases, shock. (Photo by Nijah McKinney).

Nijah McKinney of High Point is a journalism student at NCCU serving as a writer-photographer for the Durham VOICE.