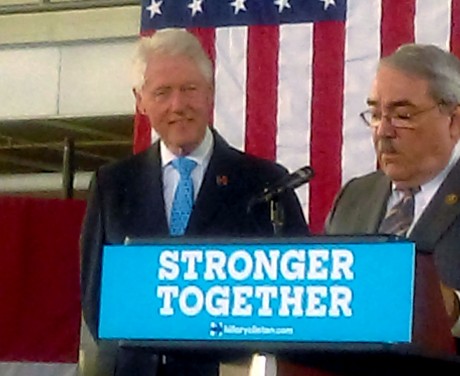 Former President Bill Clinton, along with Rep. Butterfield, during their September visit to the Lyon Center in Durham. (Photo courtesy of Tanya LaDille)

Lyon Park is in my neighborhood, and I got to see what was happening. I always heard good things about Bill Clinton, especially from my mom. My mom was 27 years old in 1992 when he did his first term of presidency. I was only 1 year old when it was the year he was leaving office. He is one of the most-liked presidents that I never got to see.

Unfortunately, I didn’t get to see the former president at the event, but I saw a lot of news trucks and news reporters. I was just coming from school when I saw all the reporters outside with big cameras. Someone from the Lyon Park building told me they saw mostly older people. There were people of many different races there. They blocked the streets off so no one could get in or get out.

In my neighborhood, it’s not everyday you would see a lot of people out there. It’s mainly black people where I live, and only few of other races. It was very uncommon to see so much diversity in my neighborhood. A lot of the streets were blocked off, including Kent and Cornell Streets. I couldn’t go see my cousins or other family at their homes without going all the way around to other streets in the area.

I spent my free time taking photographs, and I really wanted to take some photos of the crowd of people that I saw.  Only a few hundred people were allowed inside the building and that left at least more than 100 waiting outside. I don’t think there were any protesters out there and everyone looked pretty anxious to get inside.  I just was looking outside just to see if they were still there, and it felt like a few hours before they even left. My mom didn’t talk about it that much. She wanted to see him speak, but like any other parent she has a job. Hopefully, one day I will see one of our presidents and get to meet them.

I interviewed Tanya LaDille, a graduate student at North Carolina Central University. It was her first time actually seeing a president in person, and she said it was very exciting. There were probably more than 100 people in the building, she said, and the former president talked about voting, education and rights as citizens.

If I met Bill Clinton, I would personally ask him a lot of questions. I would see how he feels about the presidential debates. Some other questions I would ask would be: How does it feel to see your wife running to be where you were before? How do you feel about Donald Trump? If you could, would you run for president again? Did you feel like President Obama was a great president? How would it feel to be the first husband or the First Man?

That day was crazy; the crowd didn’t leave until later that night. The street didn’t get unblocked until about 7 p.m., and the reporters barely left 30 minutes after. Although I didn’t get to see the President, he left an impression on the West End that particular day.

Amil Mangum is a senior at Jordan High School. She is also serving as a Partners for Youth Opportunity intern with the Durham VOICE.