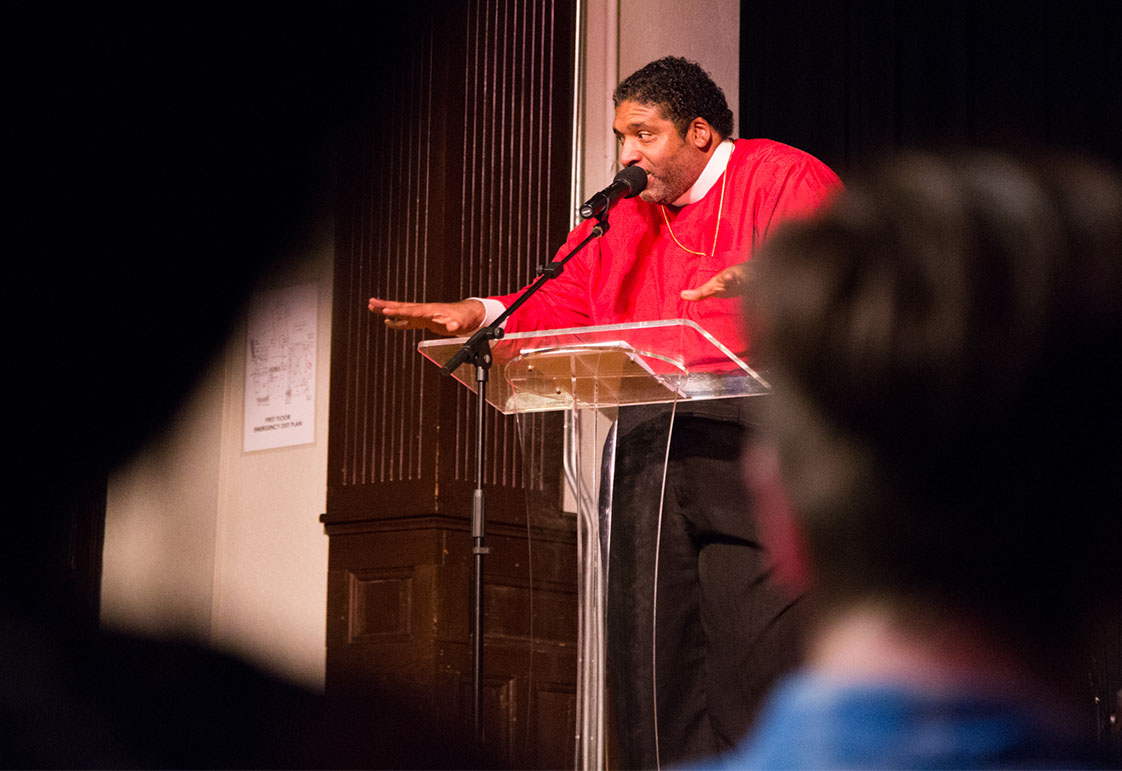 The Rev. Dr. William Barber, II, President of the North Carolina State Conference of the NAACP, addresses the audience before the screening of America Divided: Democracy for Sale on Oct. 13 at the Hayti Heritage Center in Durham. (Staff photo by Elise Holsonback)

Speaking Thursday, Oct. 24  beneath the cathedral-like ceiling of Hayti Cultural Center, the Rev. William Barber II, president of the North Carolina Chapter of the NAACP, said, “Fear doesn’t care what tool it uses, as long as it keeps the division wide.”

The theme of the night: division.

The Hayti Cultural Center hosted an advanced screening of the film “Democracy for Sale,” which explored the influence money has in politics in North Carolina, from education cuts, to the coal ash pollution of the Dan River and reduced access to voting. The film is divided into two episodes in a five-part series, “America Divided,” created by Solly Granatstein, Lucian Read and Richard Rowley, that looks at national issues in the context of eight different states.

“We have always had this struggle,” said Barber, alleging racial gerrymandering and­­­ discriminatory voter ID laws as a tactic to separate Americans.  “When you mess with the eligibility to vote, I consider it theological malpractice – suggesting that we are not equal in humanity,” said Barber.

His sentiments heavily echoed the grim look on local politics that “America Divided” tries to confront. Through the stories of various local activists, including Barber, who appears in the film, the documentary takes the audience through different issues and has former politicians, political donors and law experts weigh in on these issues in North Carolina. 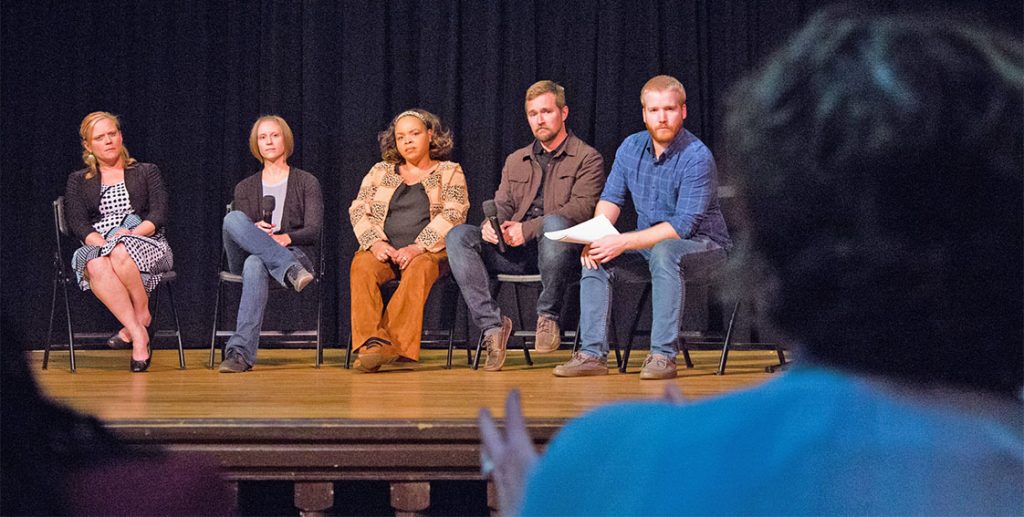 The film is narrated by actor Zach Galifianakis, nephew to former congressman Nick Galifianakis of Durham and a North Carolina native, who is interested in understanding the rapidly changing political climate in his home state.

“People are fighting these same fights all across the country. North Carolina is the place I care about but, really, we all live in our own North Carolina,” explains Galifianakis in the opening scene of the documentary.

To better understand the role money plays in elections, Galifianakis calls on journalist Ari Berman of The Nation who redirects Galifianakis to different people deeply rooted in local activism.

The film follows a political activist, Tracey Edwards of Stokes County – who has suffered three strokes and other health issues since the coal ash pollution of the Dan River just miles from her house – and Tracy Deyton of Mitchell County, a highly vocal high school librarian fighting cuts in education and healthcare and who characterizes herself as “a thorn in people’s thigh.”

Through these women’s stories, the film questions how a few wealthy people can use their money – or political voice – to influence who is elected to power in the government, and the effect of that on the everyday person who directly experiences pollution and tax cuts, and who have to fight to be heard.

Although the film begins with Galifianakis discussing the attention North Carolina has received due to House Bill 2, the film never mentions the bill again or explains the impact it has had on the state.

Following the film, Lucien Read, director of the film and from Orange County, was asked by an audience member why this issue was left out.

“North Carolina is an example of some of the worst things happening, but some of the best too,” said Read. “I feel like we could have made the entire series in North Carolina, but there wasn’t enough time to cover everything.”

Read made a point to distinguish “Democracy for Sale” apart from the other documentaries in the series as more comedic due to the nature of Galifianakis’ narration. “The Hangover” actor narrates crucial background information throughout the film along with unloading heavy statistics, regularly peppering it with sarcasm and humor that Read described as almost necessary so that the audience could fully digest the amount of data given during the film.

Other episodes in the series, which can be watched from www.epix.com, feature different celebrities, such as actress Amy Poehler, actor Jesse Williams and hip-hop artist Common, who all discuss social issues of inequality from their home state, such as the criminal justice system, immigration and drug addiction.

Chris Kromm, executive director of the Institute for Southern Studies based in Durham, spoke to the audience before the discussion to put the film in context for the upcoming election, which includes the two hotly contested races for governor and the U.S. Senate.

“North Carolina is ground zero for politics right now,” said Kromm. “The balance for the North Carolina Supreme Court is up for grabs this election. Voting is a fundamental civil rights issue, and your vote shouldn’t depend on money.”

The panel concluded with Edwards and Deyton reflecting on their experience of working on the film. Edwards smiled and confessed that during filming, she didn’t know who Galifianakis was and is glad she didn’t because it allowed her to “speak from the heart” about her experiences.

As for moving forward from the film, Edwards, Deyton and Kromm echoed the importance of civic involvement in various forms, such as protesting, voting and speaking with legislators.

Riley Turner is a senior anthropology major at UNC-CH. The Charlotte native is serving on the VOICE as a staff writer-photographer.