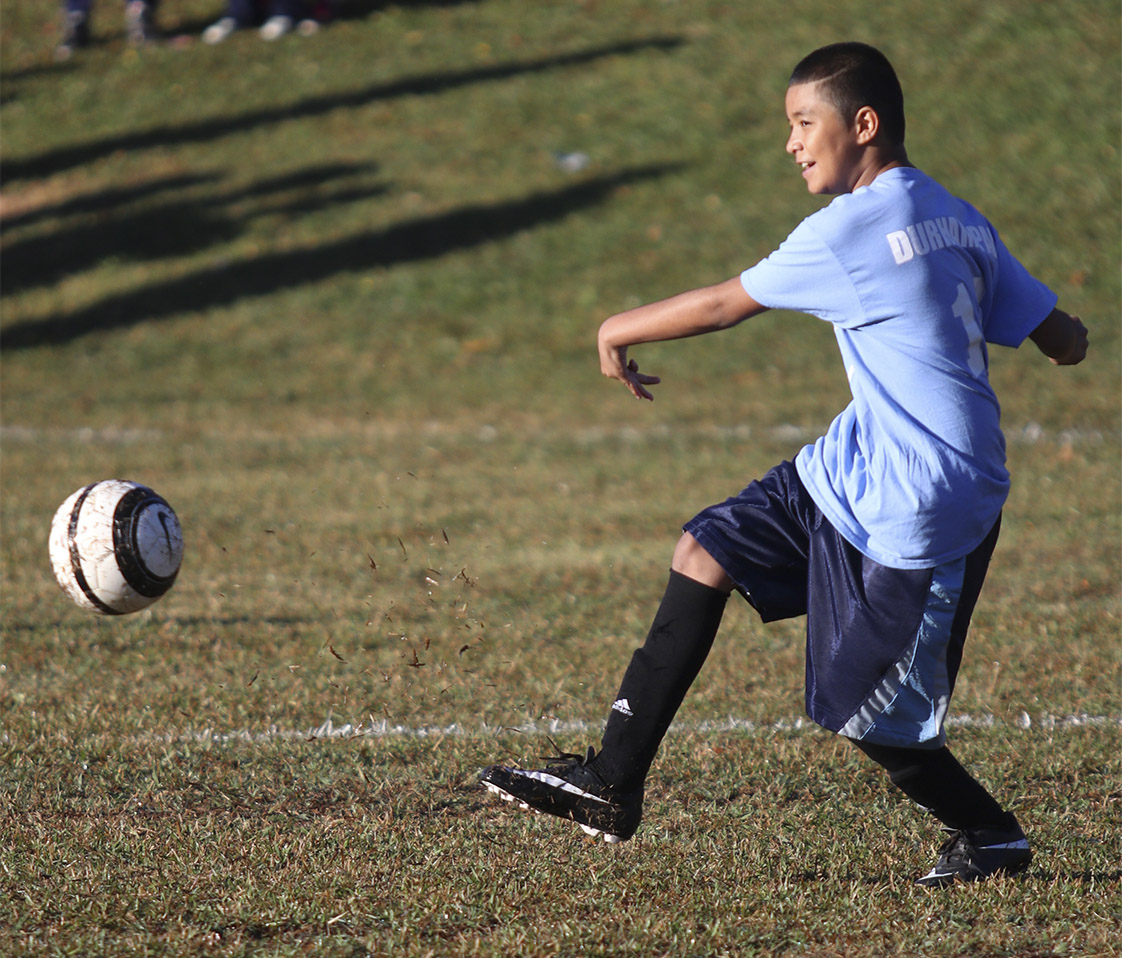 On a chilly Saturday morning in November, two police officers cross the deserted soccer field in front of the Holton Career and Resource Center. But they’re not patrolling the area — together, they lift up a soccer goal on their shoulders and move it along the white lines painted in the grass. 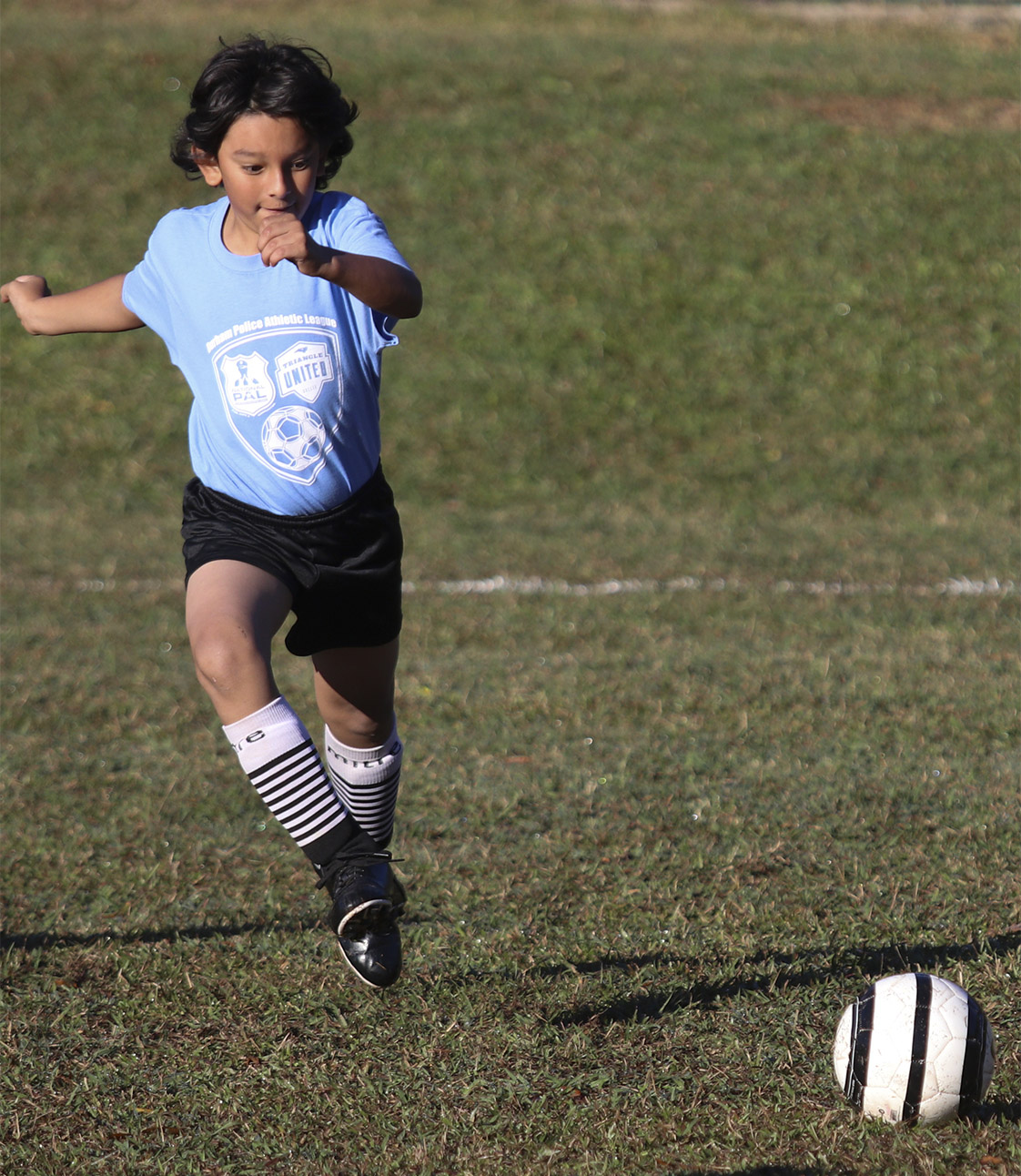 Soon, cars start rolling into the parking lot. The officers greet coaches with hearty laughs and handshakes, squinting in the bright morning light.

By 9 a.m., the fields are full of kids in a rainbow of T-shirts, shouting and laughing as they line up for passing and shooting drills before their games.

It’s a typical fall Saturday with the Police Athletic League, a national program that started in Durham in 2010 to give kids who might not be able to afford sports otherwise a chance to play, and to encourage positive interactions between kids and police officers

Officer John Suitt, who works in the Community Services Division of the Durham Police Department, is one of the program’s coordinators. He said the league partners with 15 public schools in Durham and serves over 1,000 kids. The program, including T-shirts, is free.

“All they have to do is come out to play,” Suitt said

Some coaches are police officers, while some are Durham Public Schools employees.

Though the program started before the national conversation about relationships between police officers and minority communities came to the forefront, Suitt said he feels it’s always been vital for officers to engage with kids while they’re young. 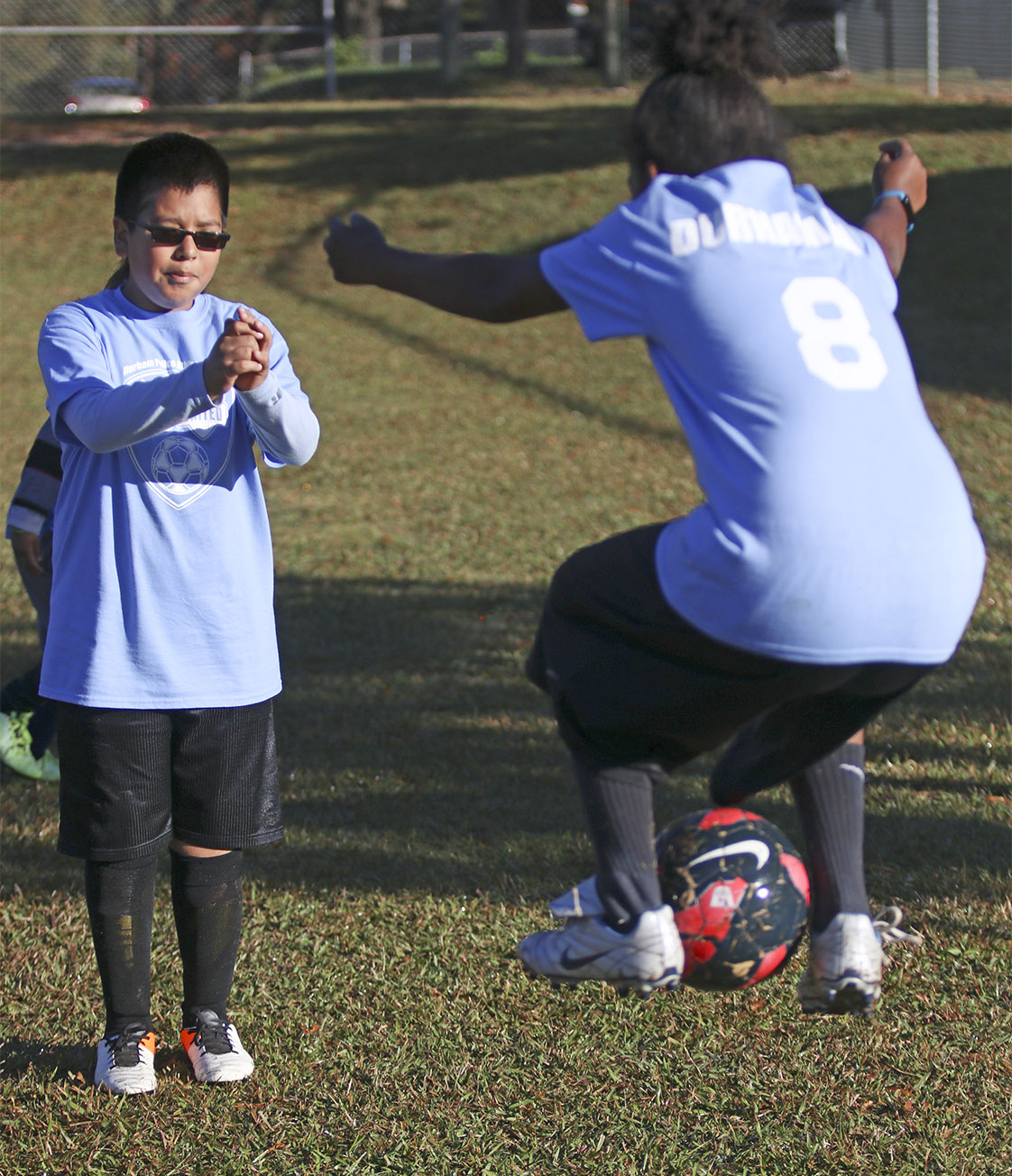 Teammates Kayden Sims (right) and Juan Arenas-Villalobos goof off on the sidelines while the rest of their Eastway Elementary School team takes on Merrick-Moore Elementary School as a part of the Police Athletic League on Saturday, Nov. 5.

“It builds a rapport without being involved in anything that’s gang-related, keeps them off the street and just gives them something positive and structured to do,” he said. “We’ve always felt this was important. We hope the relationship just makes things better overall.”

Officer Jessica Butler said with a laugh that the kids she coaches from Club Boulevard Elementary School don’t believe her at first when she says she’s an officer. That gives her a reason to show them her badge, or to give them a tour of the station.

“Then they think it’s really cool,” she said.

Suitt recalled the story of one reluctant player.

“We’ve actually had a kid that, at one point, didn’t really care too much for police officers,” he said. “Now he wants to become one. That was really good to hear.”

Some kids, like Eastway Elementary School fifth-grader Juan Arenas-Villalobos, don’t seem to care about the occupation of their coaches, because they’re so focused on the game.

“I like that we have a lot of teamwork, and some help that will help us get better,” he said.

Arenas-Villalobos’ father helps with warmup drills on the field. During the games, he shouts to his son in Spanish, telling him where to stand as he plays defense. Many parents are native Spanish speakers, but there’s one word everyone on the sidelines yells together when Eastway get the ball past the other team — “GOOOOOAL!”

Coach Nisha Watson wears a purple baseball cap and carries a mesh bag of soccer balls, all business as she rounds up her team for a pep talk during a timeout, along with fellow coach Officer Greg Grayson.

Watson, a physical education teacher at Eastway, said it can be a challenge to coordinate with so many different families, but a rewarding one.
“A lot of our kids really want to play sports but they don’t really have a lot of opportunities that are affordable and near the neighborhood,” Watson said. “It’s difficult, but I love the bond that it helps me form. It’s been an awesome experience.” 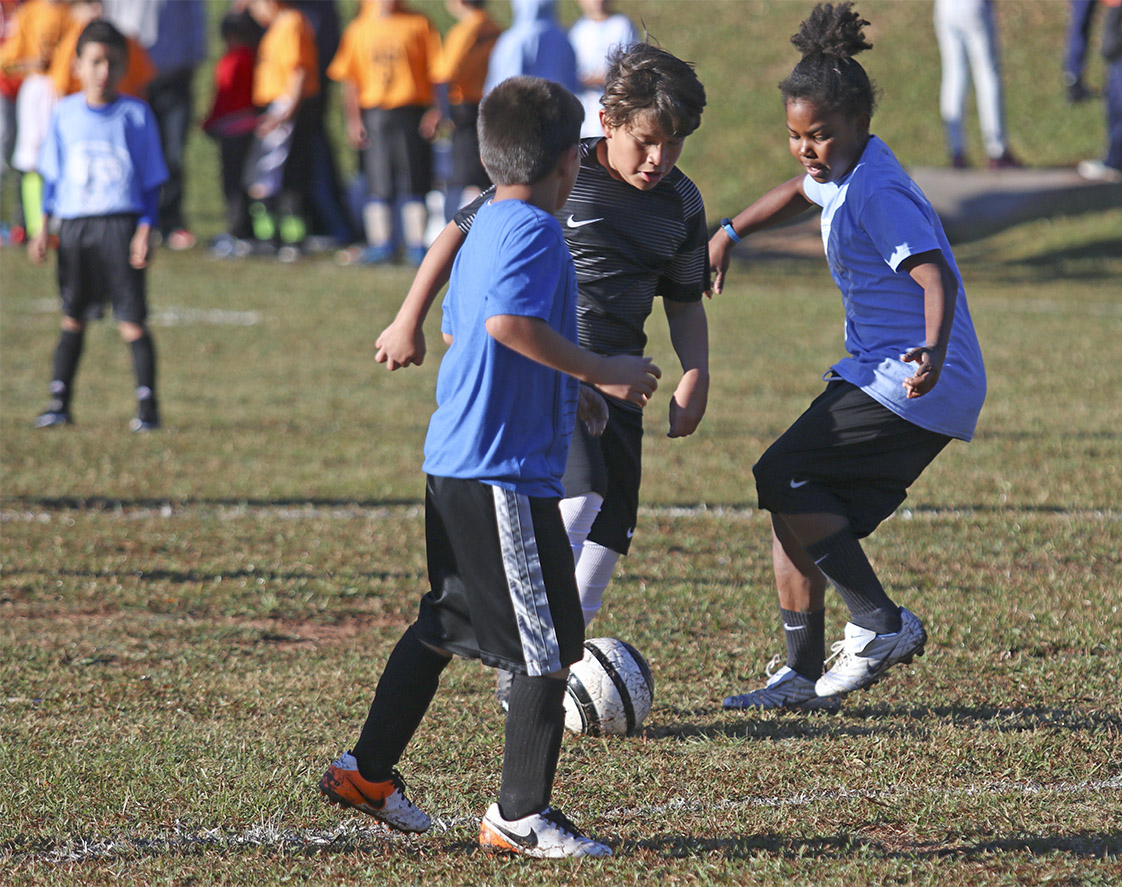 Brenna Elmore is a UNC-CH junior photojournalism major from Chapel Hill. She is a photographer-writer for the VOICE.

Rachel Herzog is a UNC-CH senior journalism major from Lewisville. She is serving as the UNC co-editor of the VOICE.