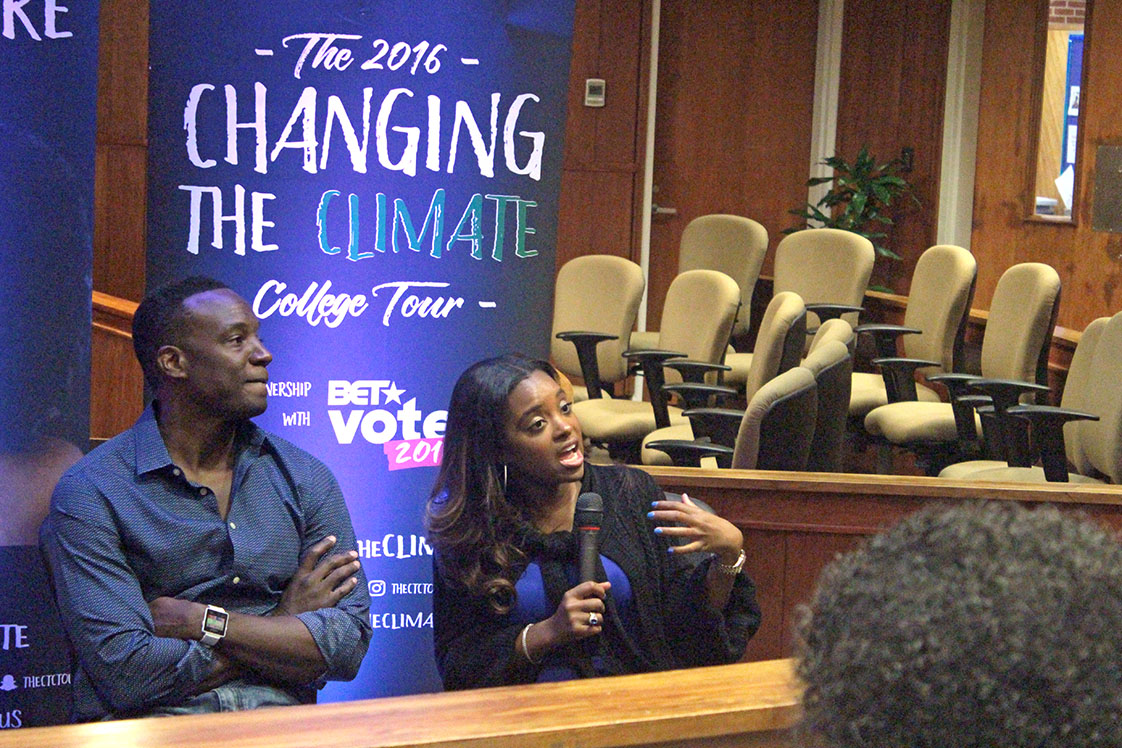 When it comes to elections, many pose the question “Will millennials vote?”

While the 2016 election is in the books, it appears that there are continuing questions concerning this age group. For that reason, one Washington, D.C., group conducted a college tour this fall, stopping at N.C. Central University on Nov. 2 to encourage young people to vote.

Vestige Strategies, a civic community engagement firm, founded by couple Quentin James and Stefanie Brown James, are diligently worked to reach out to millennials, primarily in the African-American community about the importance of them voting, especially in the current election.

“We know it is very critical to engage black millennials to get them to vote, and we didn’t feel like that was an emphasis from a lot of other groups out there. We called folks and said “Hey we have an idea.” They agreed with us that this is important, and they wanted to clear their calendars and make sure we could engage with students across the country,” Quentin James said.

Gathering various entrepreneurs and activists as panelists, the tour sparked conversation at various universities of why millennials should vote, the outcome of voting and not, and politics on their “Changing the Climate” tour, in partnership with BET Vote.

“We also want to use this tour to talk to media about the issues young people are not hearing on the campaign trail. The importance of our work is to make sure we bring amazing people together like our panelists to students here at North Carolina Central University to have a conversation about not only the election, but these critical issues and how we can move forward as a community,” James said.

NCCU was actually the last stop on the tour with the panel held on Nov. 2 in the Turner Law Building. The law building was an early voting site for Durham.

The panel opened with the question, “Why should we vote?”

“In this moment there is so much at stake. It is such a powerful moment for us to be able to continue our fight by going into that polling place and saying, ‘This is what I’ve said in the streets but I’m letting you know I’m an educated person who can put vote where my mind is. For us to have a conversation from a place of power, we need those numbers to represent that we showed up,” panelist Tamika Mallory said.

Stefanie Brown James then asked, “How do we get to the point where we’re changing the culture so that these conversations draw more attention and want to be heard?”

“When we recognize the power is ours and inherently in each of us, and that we don’t have to ask anyone for it or demand it, that it already belongs to us but that we just need to leverage it and use it, I believe the culture will change,” panelist Brittany Packnett said.

“I believe we change the culture with the attention that we pay and the credence that we give to those that we idolize. Everybody loves a little ‘ratchet’, trap music, etc. but to continuously support people we know aren’t our best advocates, we do ourselves a disservice.  The way we’re going to be able to change the culture is because we’re going to change the people we have out in front and are supporting as a people,” panelist Kwame Jackson added.

To close the panel, each panelist left the audience with a simple tactic they can use to show how powerful they can be, and how they can ‘change the climate’ for the better of black people.

“We’ve just been trying to let folks know. They are powerful. They are the culture creators. Brands are looking and trying to follow their trends, so when it comes to these issues, just they’re as powerful in setting political trends as they are cultural ones,” James said.

Nijah McKinney of High Point is a journalism student at NCCU serving as a writer-photographer for the Durham VOICE.