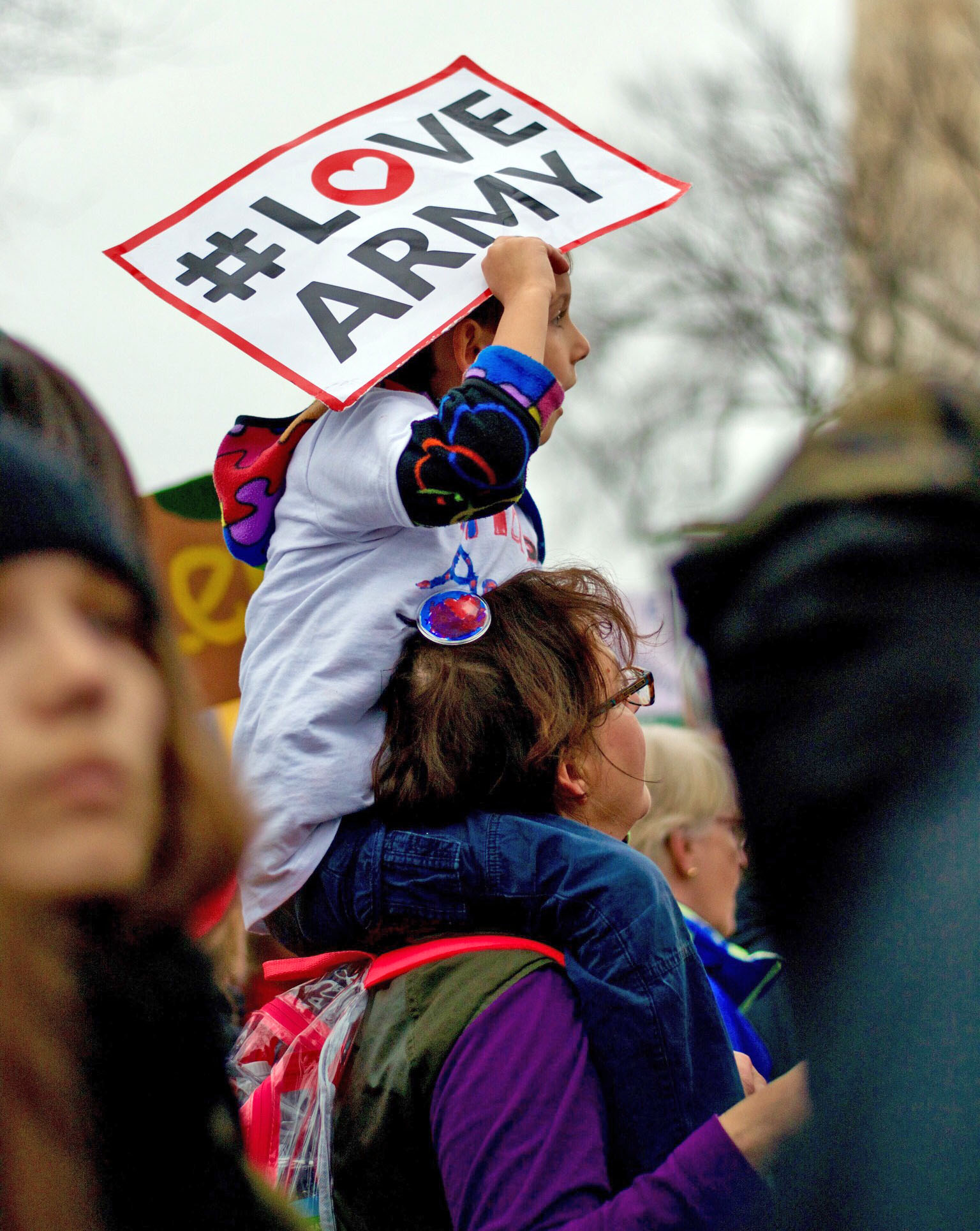 A young child sitting on a pair of shoulders holds up a sign at the Women’s March on Washington. (Photo courtesy of Nina Tan, Staff Photographer for The Daily Tar Heel)

Millions took to the streets across the nation in solidarity with women less than 24 hours after Donald Trump took the oath of office.

Aatia Davison, a 19-year-old studying at UNC-Chapel Hill who grew up in the Triangle, traveled to Washington, D.C., to make her voice heard. 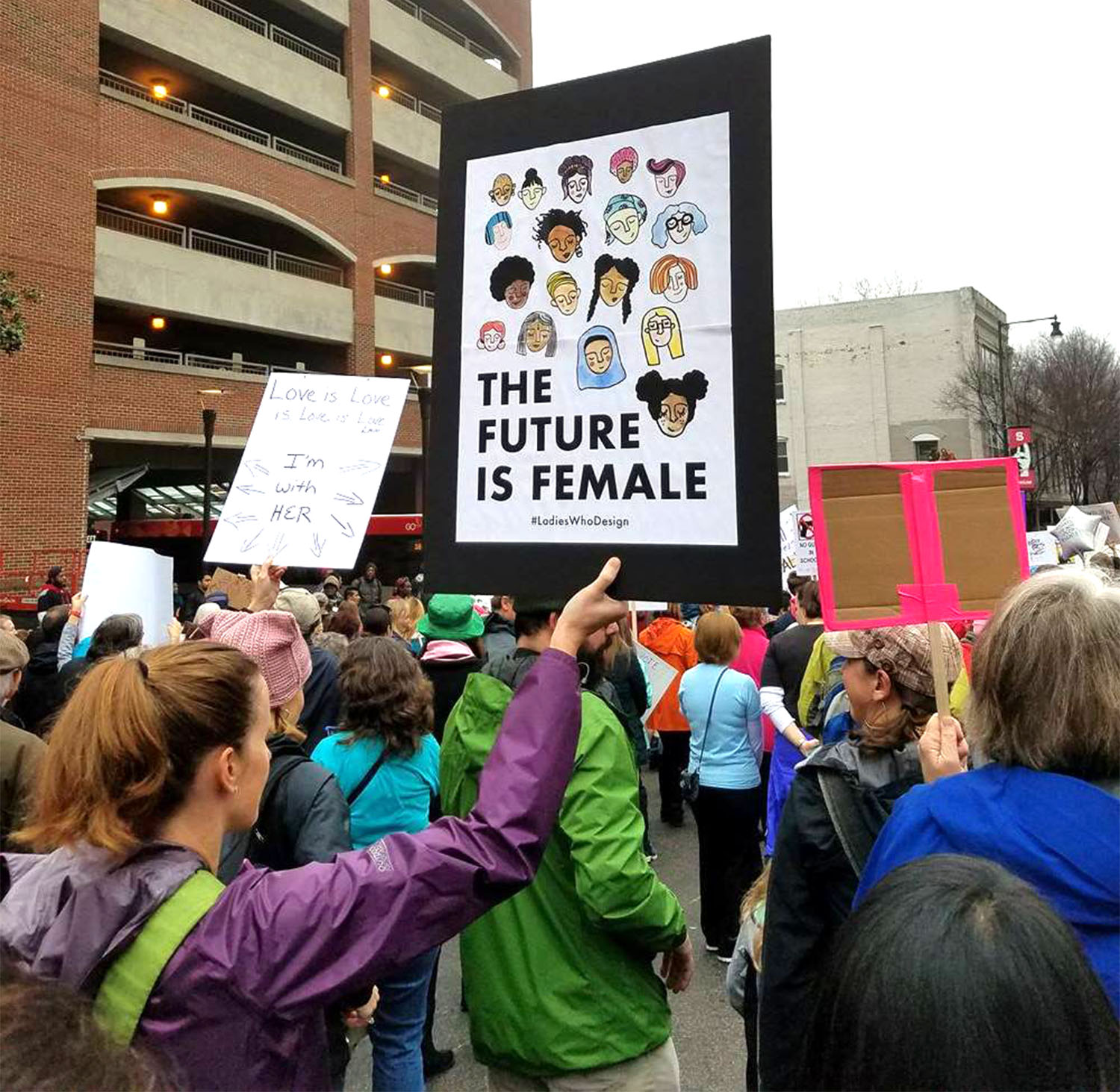 Crowds made up of predominantly white women gather in downtown Raleigh protesting in favor of the progressive agenda. (Photo courtesy of Kayley Peters)

“No hate, no fear. Immigrants are welcome here,” she chanted alongside others at the march.

Said Davison of the chant, “I want so much for that to be true.”

Davison, who is involved with the Campus Y committee for Criminal Justice Awareness and Action at UNC-CH, spoke of the importance of the event, citing both its power and its importance to the progressive agenda.

“The Women’s March … was, to me at least, both a protest and a celebration,” she said. “There was … a sense of reverence and revelry in the crowd, a celebration of womanhood and feminism and all which that entails.”

“I want to march for the women who can’t,” said Davison. “As a woman of color, I know how people who share my gender identity and ethnic identity are extremely vulnerable to discrimination.”

Rather than protest during President Trump’s inauguration, protesters decided to congregate across the nation the following day. Large crowds gathered throughout North Carolina, especially in the state’s larger cities.

Many traveled to downtown Raleigh, where thousands exercised their constitutional right to assemble.

While the organizers of the event considered it the “Women’s March on Raleigh,” their website emphasized their hope to advance a greater progressive agenda, citing various political controversies that occurred in North Carolina during the past year.

“We’re seeing … a decades-long Right-wing coup … silence the rising progressive majority of this country,” the organization wrote on its website. “We will not be silent.”

Desmera Gatewood, a community organizer who lives in Durham and works with the Triangle Unity May Day Coalition, brought up her concern about the racial makeup of the march, which was mainly comprised of white women.

“We see white women hitting the street when their white womanhood has been offended,” she noted.

“But there sometimes … seems to be silence when black women are being attacked, whether it’s verbally or physically,” continued Gatewood.

She explained that women of color and transgender women have fought for decades, if not centuries, to make their voices heard, and that the burden should not fall on women of color to mend the racial gap among feminists.

Faith Jones, a first-year at UNC-CH who grew up in Durham, criticized “white feminism,” a term some use to describe activism among white women who advocate for their own advancement without advocating for women of color and other women of lesser privilege.

“I think women of color are often silenced and neglected in a lot of ways, and this seems to be no different,” commented Jones.

Both Jones and Gatewood offered advice to white women who hope to advocate for all women.

“White women do need to wake up and acknowledge their privilege,” said Jones. “It gives them many blind spots.”

“Listen to the voices of women of color and trans women,” continued Jones.

“When you see [racial] oppression happening …, make sure you’re not participating,” said Gatewood.

In almost two weeks since Inauguration Day, the Trump administration continues to stir uncertainty into the lives of Americans, prompting many to question how they should handle life over the next four years.

“Unfortunately, in any situation where you’re being attacked, you have to defend yourself,” explained Gatewood. “If that defense looks like … continuing to be in the street and marching and making your voice heard, that has to be known.”

“Be alert,” she said. “Join an organization.”

She listed the Durham Solidarity Center, the Triangle Unity May Day Coalition, SpiritHouse, Durham Beyond Policing and Durham For All as organizations someone interested in activism might join.

Additionally, the North Carolina NAACP will gather Saturday, Feb. 11, at 8:30 a.m. in downtown Raleigh for its HKonJ (Historic Thousands on Jones Street) event.