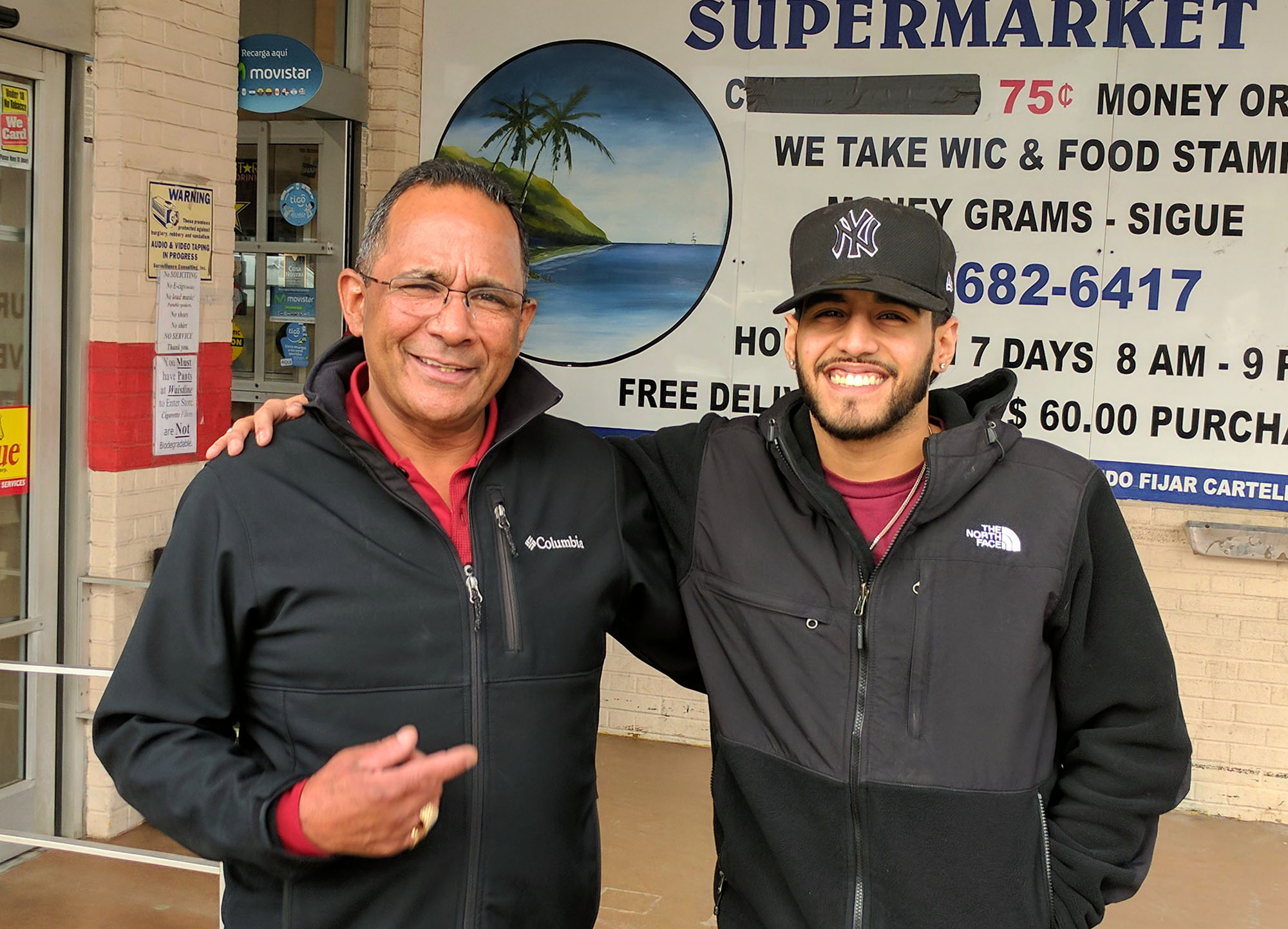 Miguel Collado, owner of the family business, Los Primos, and his son Chris Collado, an employee. (photo by Brian Shurney)

Supplying juicy fruit, leafy vegetables and fresh cuts of meat on dinner tables throughout Northeast Central Durham, Miguel Collado is a provider for the community.

Miguel is the owner of Los Primos Supermarket on Alston Avenue. He used to have partners running the business with him, but he took sole ownership of the store in September. Even so, Los Primos is a family business that includes his wife, Ana Collado, and two of his sons, Michael and Chris Collado.

The Collados are doing well for themselves. 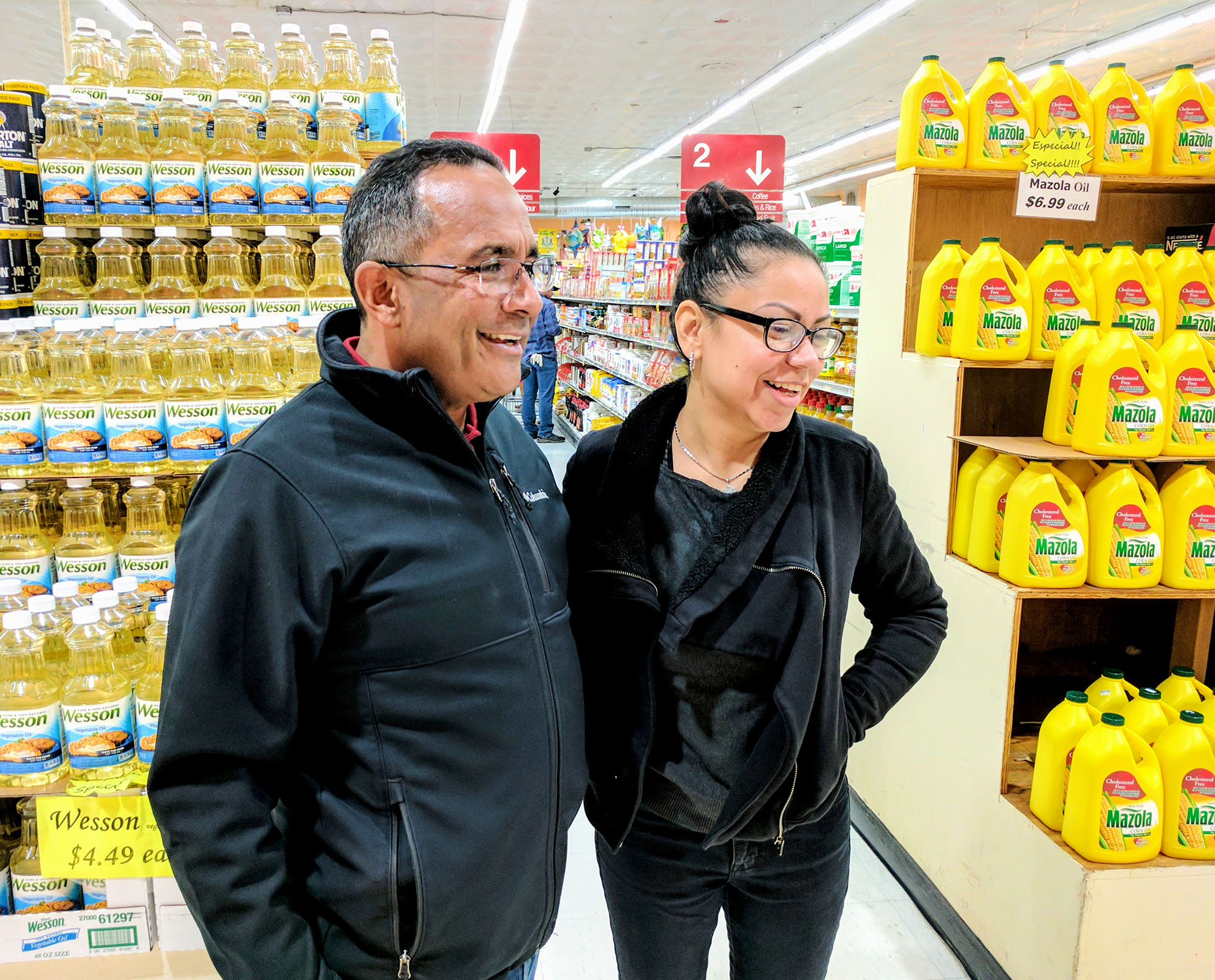 Miguel is certainly doing well – he has a loving family, a stable business, a strong sense of compassion and love for his community – but it has taken hard work, sacrifice and a commitment to humility to get where he is today.

Miguel was born in the Dominican Republic and grew up on a farm with his parents and three siblings.  His family immigrated to the United States when he was 15 and his dad enrolled him in the George Washington Educational Campus in New York City. He spoke almost no English and was harshly bullied for it.

“When I opened my mouth, everybody used to laugh,” Miguel says. “So I chose not to open my mouth.”

His teachers eventually sent a letter to his father about his lack of participation. His father was authoritative, and his strict expectations for his family taught Miguel respect.

“My father is the king, the president, the senate,” he says. “He was really a dictator.”

Miguel’s father was serious about education. He confronted Miguel and said, “I don’t care what happens, you’re going to do better than everyone else.”

Miguel did do better than everyone else. He found confidence in his father’s words and started raising his hand for every question.

“Six months later, I was on top of everything,” he says. “My English was shining – it was getting better every day – and I was staying in school after hours.”

Even though Miguel was doing well in school, he lost sight of his education once he started making money from a part-time job.

“I fell in love with the little green money,” he says with a laugh. “I don’t regret it.”

His father was upset, but he knew Miguel didn’t quit school to “sit in the corner.” Miguel could sustain himself – and even a family – without a high school degree.

With his new family came a lot of new responsibilities. Both he and his wife, Dulce Collado, worked, with Miguel balancing three jobs to support his family. He struggled to find a good job – one that would give him enough money for more than just living expenses.

Many of Miguel’s employers were corrupt. One paid him $20 dollars for a 14-hour workday, and yet he values those experiences.

Miguel wasn’t in school anymore, but his business education was just beginning. While working delivery at a liquor store in N.Y., his manager’s focus on treating employees as equals left a lasting mark.

Miguel moved to Las Vegas, working as a landscaper and doing well, until the economic impact of 9/11 changed all that. No tourism in Las Vegas meant a scarcity of jobs. He was laid off. Having to ask his wife for money took a toll their marriage, which led to a divorce.

“I was very low – the lowest point in my life – having to face this irreparable scenario,” he says.  “My blood pressure was going up.”

Miguel was out of work, but his brother, Fausto Collado, had an idea for a business partnership at a run-down store in Durham. Without hesitation, Miguel sold his house and went to Durham to check it out, believing this was his chance to make a comeback.

“I saw the green,” he says. “Everything was so nice, so different from Las Vegas.”

The state was beautiful, but the store his brother showed him was in poor conditions.

“This place was a disgrace,” he says, “but have you ever seen something, and you know it’s gonna work?”

Miguel, Fausto and their childhood friend, Quide “Ralph” De La Cruz, bought the store and started the renovation process in 2002. Before long, they had repaired and stocked the store, making it ready for business.

Hector De La Cruz was one of the first employees of the store.

“It was ugly. I wanted to run away and return to New York, but I had a commitment to my cousin, Ralph,” Hector says. “Miguel is different because he treats his employees well. You can talk to him. He doesn’t yell.”

Leo Peña, owner of a nearby competitor, Compare Foods Supermarket, helped Miguel and his partners by connecting them with local produce dealers.

“I visualized that we were gonna make it,” Miguel says, “and in three months we tripled sales.”

The owners decided on the name “Los Primos,” a phrase commonly used among friends in the Dominican Republic meaning “the cousins.” In the beginning, they would refer to customers as “cousins,” so the name stuck.

Thanks to Miguel, Los Primos is now thriving in NECD, catering to the needs of the locals by cashing checks for customers and offering services like MoneyGram, a national money-transfer firm. The store stakes it claim as an integral part of the community by striving for a great atmosphere and selection of fresh food.

Miguel says that getting rid of alcohol was the best thing that ever happened to the store. When Los Primos sold alcohol,  he says people would steal, trash the parking lot, and get into fights – sometimes with Miguel himself.

“I lost my knuckle punching people in their heads,” he says, pointing to his fingers, “and that’s the truth!”

Because the store is across the street from the Durham Rescue Mission, Miguel often meets people working through some of life’s more difficult challenges. He encourages people to “choose good daily,” and warns them of giving into temptations – he says people sometimes call him “the preacher.”

“Learn from your falls,” he says, “they will make you better.”

He wants his store to be a place where respect, acceptance and good customer service are all provided.

Ana Collado, Miguel’s wife, helps with the register when she can.

“We take people’s problems as our own,” Ana says. “Miguel is great here but better at home. He always helps me with cooking and house chores.”

Benita Suenz, 45, a customer since 2000, likes the proximity of the store to her home.

“I can do all of my errands here,” Benita says. “I can find food from my country, and the staff here is very nice.”

Despite the widening of Alston Avenue, Miguel feels that Los Primos is secure. His petition kept the road expansion plan from taking out his store, although he will be losing 25 parking spots.

“We’ve created a lot of respect in this community. People aren’t just gonna walk away from us,” Miguel says. “I think we’ll be ok.”

Brian Shurney of Cary is a sophomore at UNC-CH double majoring in journalism and music. With the Durham VOICE he is serving as the multimedia editor. 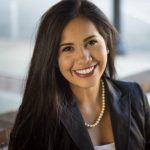 Jarely Parada is a senior at the UNC-CH School of Media and Journalism and is serving on the VOICE as a staffwriter/photographer.