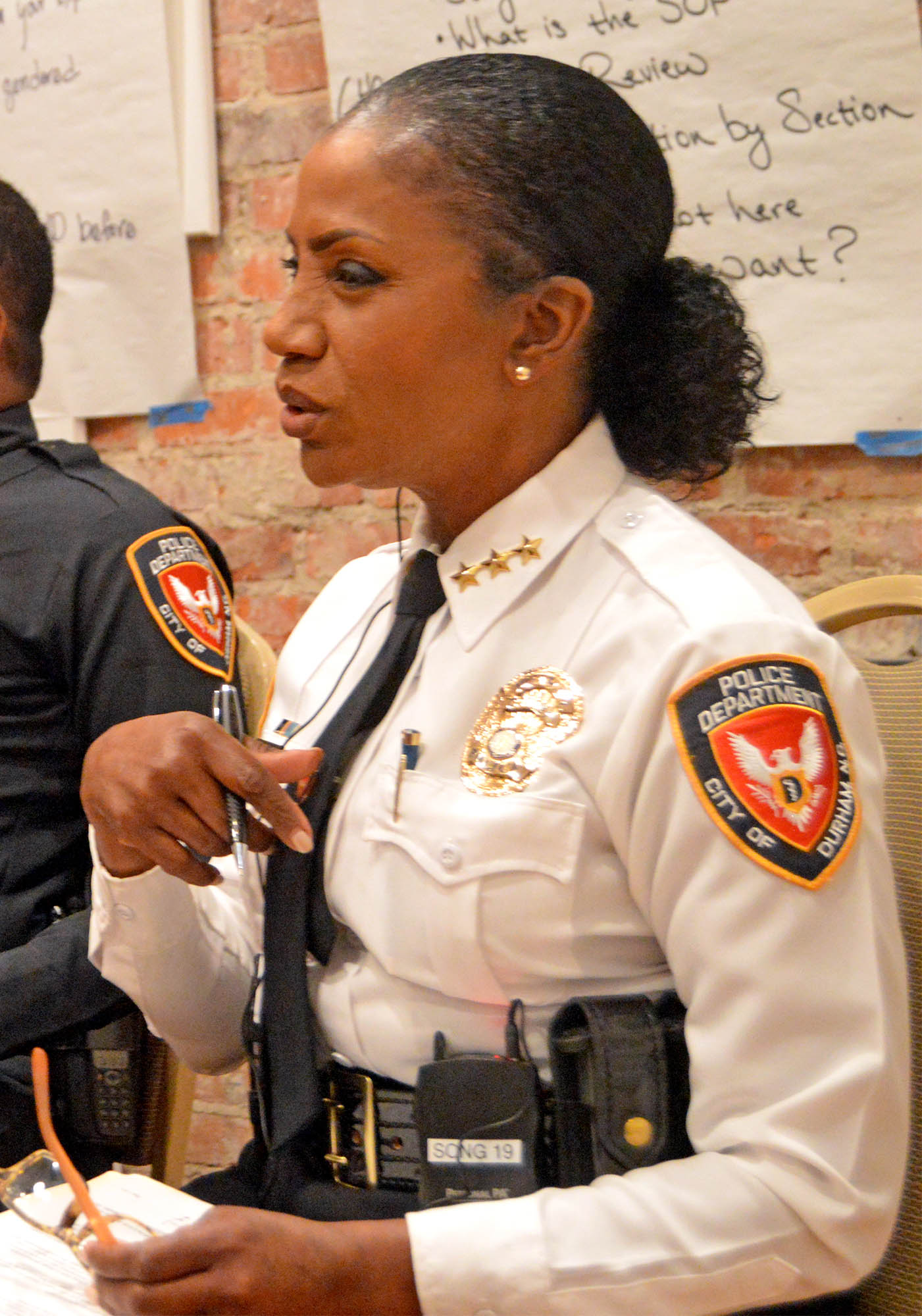 Durham Police Chief Cerelyn “C.J.” Davis said that building a better relationship with the community is at the root of public safety.

“Community raised me,” she said. “We all search for family somewhere. If they don’t have it at home, young people may look for it on the streets.”

After taking the oath in June, Davis became the Durham Police Department’s first African-American and female police chief. She replaced Jose Lopez, who left amid accusations of mismanagement and racial profiling, and who had a contentious relationship with the news media and the public.

Davis also inherited a department that stops, searches and uses force against African-Americans at disproportionate rates, according to data from Open Data Policing, a project of the Southern Coalition for Social Justice that publishes public records of police stops.

Open Data Policing shows that 59 percent of DPD traffic stops in 2015 were of African-Americans, who make up 41 percent of the city’s population, according to the 2010 U.S. Census.

Among police departments in North Carolina’s six largest cities, the DPD stops African Americans at the highest rates compared to population, according to Open Data Policing. The disparity is not substantially greater than in Charlotte, Fayetteville or Raleigh, but much greater than in Greensboro or Winston-Salem.

The same data shows African-Americans in Durham are pulled over and have their cars searched more often than any other group and the disparity is greater in Durham than in North Carolina’s other major cities. From 2010 to 2015, 80 percent of all car searches during traffic stops have been with African-American drivers, a practice Davis said she wants to change.

“Traffic stops are an age-old and disparate practice,” she said.

The DPD also uses force against African-Americans more often. From 2010 to 2015, the DPD used force on 37 people. Thirty-four of those were African-American and three were white. This is consistent across North Carolina’s major cities which all use force against African Americans more often than against whites or other groups. The DPD has not yet released data on use of force for 2016, though there was at least one incident at McDougald Terrace where, according to a DPD report, Officer C.S. Barkley shot and killed Frank “Scooterbug” Clark. Both are African-American men.

Over the last several years, the DPD has established practices to reduce bias in policing, according to an email from DPD Public Affairs Manager Wil Glenn. The department reviews traffic stops for purpose and action taken, analyzes officers with at least 25 traffic stops with a 75 percent-or-higher stop-rate for minorities and now officers are required to get signed permission for consent searches during traffic stops. Incoming recruits complete the Fair and Impartial Policing training, intended to reduce the effects of implicit bias in officers, according to the company’s website. Officers have also received verbal conflict and de-escalation training, Glenn wrote.

Further complicating the DPD’s relationship with the community is record numbers of violent crimes since 2015, including homicides. There were 36 in 2015 and 40 in 2016, the highest two-year spike on record, according to State Bureau of Investigations data dating back to 1992.

“The attitude of perps has become less humane,” she said.

Durham has grown by over 70,000 residents since 2000, according to the U.S. Census. Data from the SBI show that property crime rates have decreased significantly in the last 15 years. While the total number of violent crimes in Durham is at an all-time high, the rate of violent crime per capita is less than what the city faced in the early 2000s.

A rapidly expanding Durham faces a litany of growth pains. The DPD cannot solve all of them on its own, Davis said.

She said she hopes to expand partnerships with local churches and has met with Bull City United, a violence reduction initiative modeled after the Chicago-based Cure Violence. The Department of Justice recommended the initiative for Durham in a report released in April 2015 that focused on curbing gun violence and improving police-community relations. BCU’s staff is made up of Durham residents who grew up affected by or involved in gun violence.

“Their stories and perspectives are very important,” Davis said. “They go into the neighborhoods with a lot of credit and influence. We feel like they would be an asset in reaching some of the folks that we’ve been trying to reach ourselves.”

The DPD is also making efforts to reach out to minority communities. Officer Strickland was named as the DPD’s first LGBTQ liaison in September, and Obed Ortiz will assume his role as the Hispanic Liaison Officer this month, Glenn wrote.

Davis said the department is also trying to increase the influence of the Police Athletic League, which is part of the DPD’s Community Services Division and seeks to build relationships between youth and police officers through sports.

Unfortunately, Davis said, the audience for programs like PAL isn’t necessarily the people who need it the most. She said the department is trying to prioritize reaching teenagers, especially those 13 to 16 years old, in the districts with the highest crime rates.

Davis said both crime and policing are concentrated in districts 1 and 4, which occupy the entire eastern half of the city where most of Durham’s minority residents live. The area contains Southside, Kerrwood, Braggtown, Holloway, Turnkey and McDougald Terrace, all neighborhoods that lost residents to gun violence in recent years.

“We follow the data,” she said. “It’s not a task you can be politically correct about.”

Davis said she hopes to increase police visibility in high-crime areas through means other than traffic stops and checkpoints.

“You’ll see blue lights running, but that doesn’t mean the officer’s pulling anybody over,” she said, explaining the high-visibility policing strategy that aims to deter crime by giving the impression of heavy police presence and activity.

“We’re not so much looking for suspects,” she said, “we’re looking to change minds about, ‘Is this what you want to do?’”

Rachel Herzog is a UNC-CH senior journalism major from Lewisville. She is serving as the UNC co-editor of the VOICE.

Jordan Wilkie is a first-year master's degree student at UNC-CH. The Dallas, Texas, native is serving on the VOICE as a staff writer-photographer.