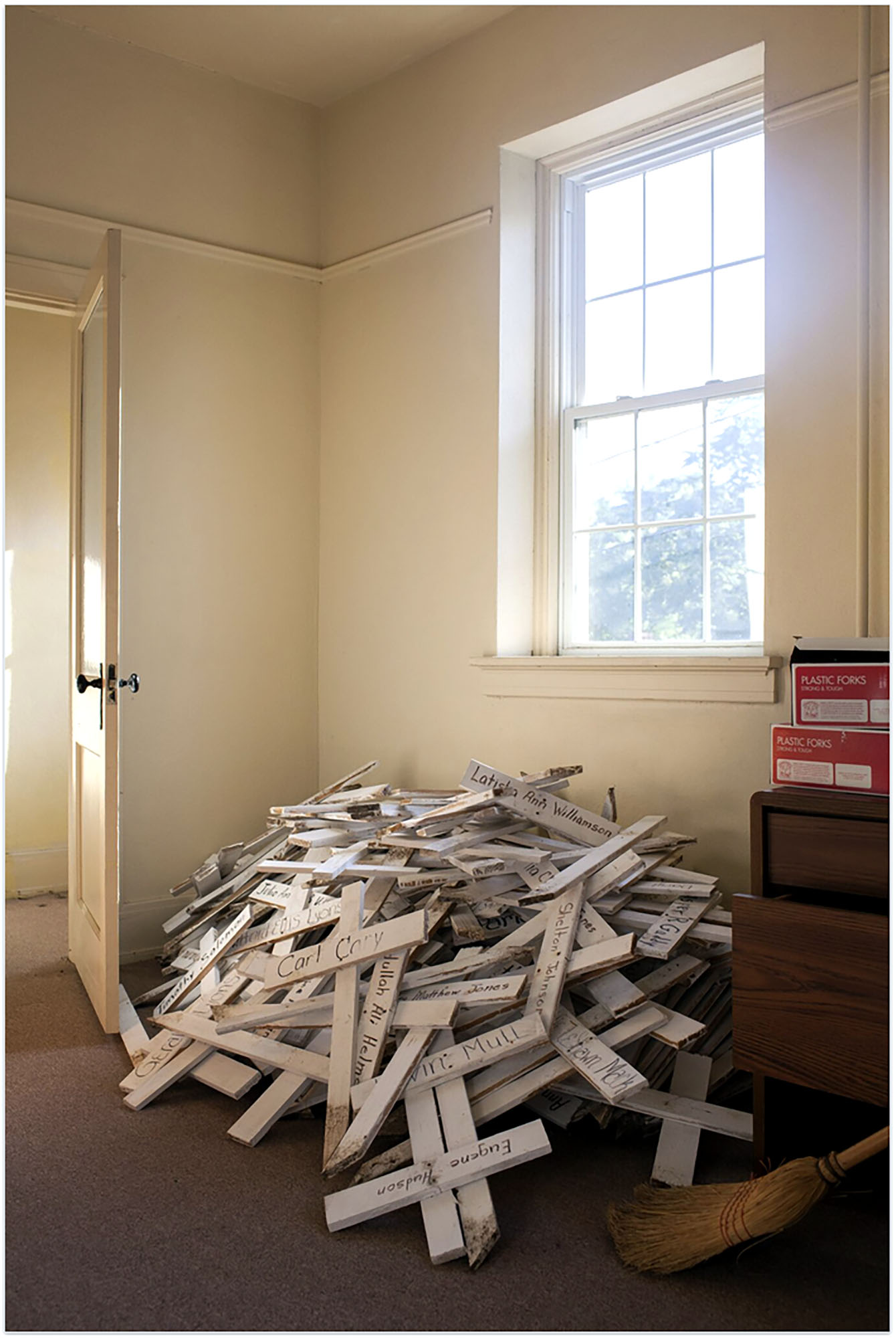 Crosses from a memorial to homicide victims stacked inside The Shepherd’s House United Methodist Church in East Durham in 2013. Shepherd’s House is dedicated to nonviolence and reconciliation in Durham. (Photo courtesy of Justin Cook)

For 25 years, the Durham community has been honoring victims of violence with an annual vigil.

The 25th Annual Vigil Against Violence will be held 7 p.m., Thursday, Feb. 16, at Shepherd’s House United Methodist Church, 107 N. Driver St. Organized by the Religious Coalition for a Nonviolent Durham and the Durham chapter of Parents of Murdered Children, the vigil will remember 44 Durham residents who lost their lives in 2016.

Of the 44 who will be honored, 39 of the victims died from gunshot wounds.

Ruthy Jones, the vigil ministry and community coordinator for the Religious Coalition, said the event typically has more than 100 attendees and fills up the Shepherd’s House UMC.

Jones said the vigils began in 1997 after a spike in shooting deaths. The vigils were held at the sites of murders or on the steps of the Durham courthouse.

She became involved about 15 years ago and has since helped the event grow. The Religious Coalition now holds additional vigils on every second and fourth Thursday of the month at 5:30 p.m. in front of the Shepherd’s House UMC.

“I think it’s really important that we recognize that we have lost valuable people to our community because every person’s life has worth and value,” Jones said. “It doesn’t matter who they are, and it really doesn’t matter what experiences they’ve had in life or the actions in those experiences.”

This year’s keynote speaker is Diane Jones, the leader of the Durham chapter of Parents of Murdered Children.

Diane Jones lost her son, David Bullock, when he was 24 in 1997 due to a gunshot wound. She became involved with the annual vigil in 1998 and has led the Durham chapter since 2005.

“When they held it for my child after my son was killed, it made my heart feel good to know that the community cared and I wasn’t grieving alone,” Diane Jones said. “I just wish that people would take this serious because there’s a lot of hurting families, and to know that this has been going on for 25 years, we need to come together and figure out a way to stop this.”

Diane Jones said she would like to see an increase in programs similar to Bull City United, a Durham County Department of Public Health violence-reduction initiative.

Part of her ideal solution involves the reopening of Durham’s community centers.

“(Community members) need more activities, and they need more places they can go and burn off energy,” she said. “There’s a lot of people that can’t afford the different things young men need, like baseballs or basketball camps, and stuff like that needs to be available and affordable to people.”

Ruthy Jones’ idea is faith-based. She wants to see churches across Durham collaborate more to build a tighter community bond.

“Sometimes we operate in silence and we have our own turf, but it would really be helpful if we were able to increasingly come together across our differences, be supportive and know about what’s being done around town,” she said. “We could collaborate a little bit more, and I think that would be really helpful.”

Ruthy Jones encourages community members of any or no faith to take action by attending one of the semimonthly vigils to show support.

She said families that have experienced loss frequently tell her that it is comforting to receive support from strangers acknowledging the pain felt around the community.

“I think it’s very important for the Durham community to come together and recognize the fact that we have this terrible and tragic loss taking place in our community,” Ruthy Jones said. “It needs to stop because we are losing wonderful, wonderful people.”

Diane Jones has been waiting for a solution for 20 years now, but she is hopeful that with the right action, Durham will eventually see improvement.

“To have this every year also brings awareness about the fact that this hasn’t stopped,” she said. “As a matter of fact, it’s getting worse, and my thinking on the whole thing is that if we stand back and do nothing, then nothing is ever going to change. Coming together and speaking out against it, saying we don’t agree with it, it will eventually make a difference.”

Nicole Caporaso is a senior journalism major at UNC-CH serving as the sports editor of the VOICE. She is from Apex.