Tens of thousands of people packed the streets for Saturday’s Historic Thousands on Jones Street event in Raleigh, lead by the N.C. NAACP.  According to the event’s organizers, this number exceeded the march’s previous record from 2014. 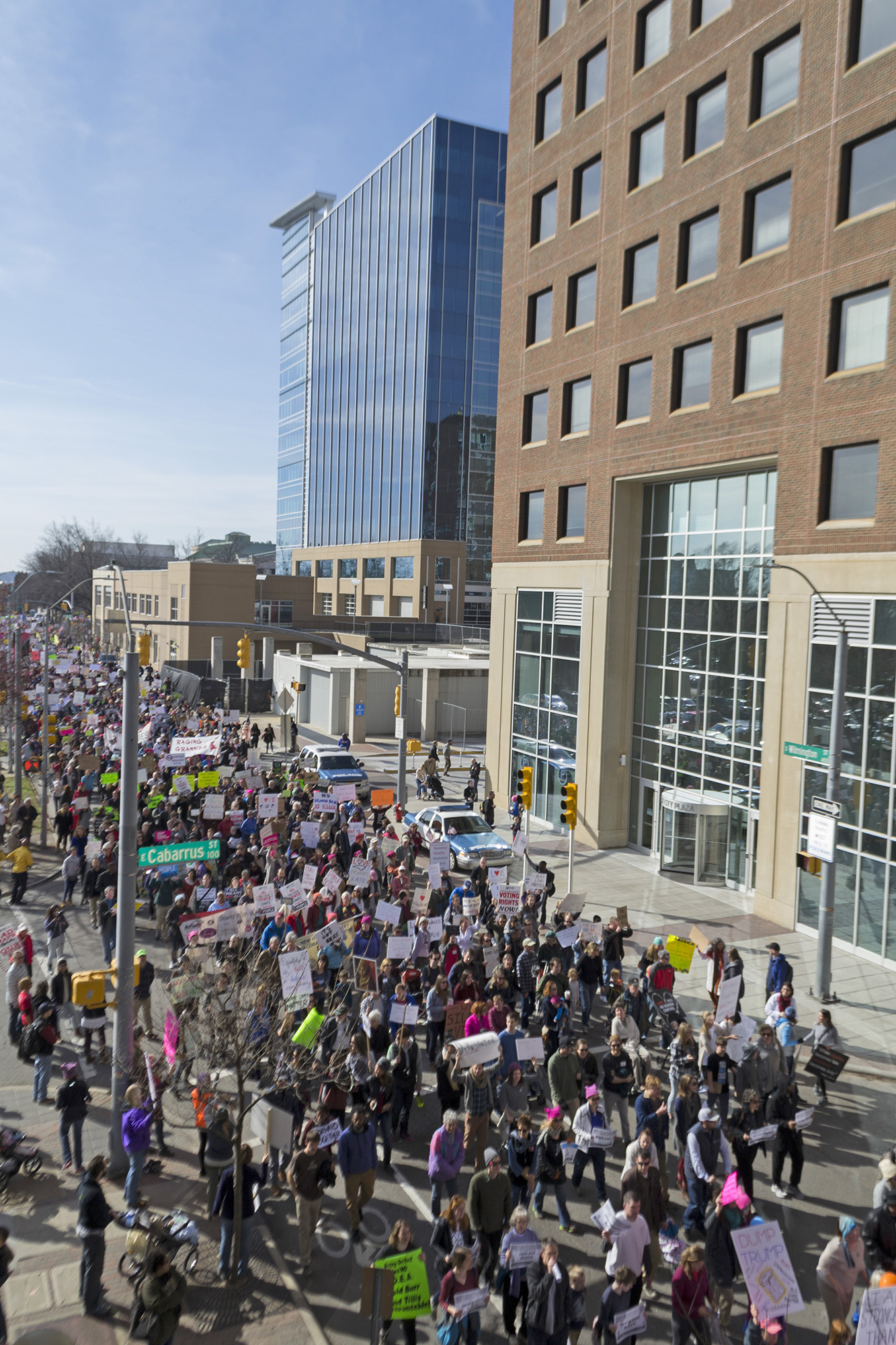 Protesters chanted as they marched down South Wilmington Street, making their way from the Duke Energy Center for the Performing Arts to the State Capitol in Raleigh. (Photo courtesy of Lauren Groffsky)

The march was bookended by speeches outside of the Duke Energy Center for the Performing Arts at 9 a.m. and the State Capitol into the afternoon.

In his first speech, the Rev. Dr. William J. Barber, II, president of the N.C. NAACP chapter, said this march was a continuation of the deep history of organization and activism in North Carolina.

“Our fusion coalition was based on the simple principle that if the wealthy few were cynical enough to stand together against justice then we should be smart enough to come together for justice,” Barber said.

The march wasn’t about political sides or divisions, he said.

“We march because public policies’ priorities are moral issues,” Barber said. “And the decisions are bigger than left versus right, conservative versus liberal, Democrat versus Republican. Some things are about right versus wrong.”

Imani MCC is a worldwide church founded as a special ministry to LGBT Christians. Several of the church’s congregants were at the march Saturday.

“It’s important that we show up,” Bowens said. “It’s silence and inaction that provide the ideal incubator for the kind of political and social movement we’ve been seeing lately.”

She also said churches have an important role to play in political activism.

“Many churches have historically understood ourselves to be non-political or apolitical, but there was no one more radically political than Jesus,” Bowens said. “And so, as we strive to be a better reflection of him, we have to get more involved in social movements.”

Joy Miller, a resident of Durham, came to the rally even though she wasn’t affiliated with any participating organizations. Miller said she marched for a variety of reasons, including voting rights, Medicaid expansion and immigration policy. She said the significance of the march was in the unity it represented.

“It’s important that we are all here together,” she said.

Durham resident Joy Miller holds a homemade sign she brought to the march to demonstrate some of the causes about which she is passionate. (Photo courtesy of Lauren Groffsky)

“We’re here because we don’t lose our battles,” Staton explained. “When we pick a battle, we’re going to win it. It’s just a matter of how long it’s going to take us.”

The march’s demands stood for the inherent rights of all people, Staton said, and that is why Durham NAACP members turned out.

“The Durham branch is here in all of its parts and all of its beautiful diversity and variety in an expression of full-throated support and joy for the recognition and upholding these various forms of justice,” he said. “All of which are an inherent right. All of which we fully intend to exercise. None of which we are relinquishing to tyranny or to a despot or to a bully.”

After marching to the State Capitol, participants listened to religious leaders, veterans and other local activists.

Speeches lasted for over an hour as participants packed both Fayetteville Street and the parking garages lining it.

Staton said that the march represented an important opportunity for members of the Durham community to have their voices heard.  Staton encouraged people who were unable to attend to contact his chapter for further instructions on how to make a difference. He also emphasized that Durham residents must continue to be politically engaged after the march.

“One of the things in particular to work on is when we get this new date for the special election to make sure that every mother, son, father and daughter who’s eligible to vote gets out and votes,” he said.

According to speakers at the rally, 80,000 protestors filled about three blocks, making the march one of the largest Raleigh has ever seen.

Barber emphasized the necessity for protesters to remain committed to the cause, both locally and nationally.

“We march because we know that we are North Carolina; we are America,” he proclaimed over an increasingly spirited crowd. “And the last time I checked, we ain’t going nowhere.”