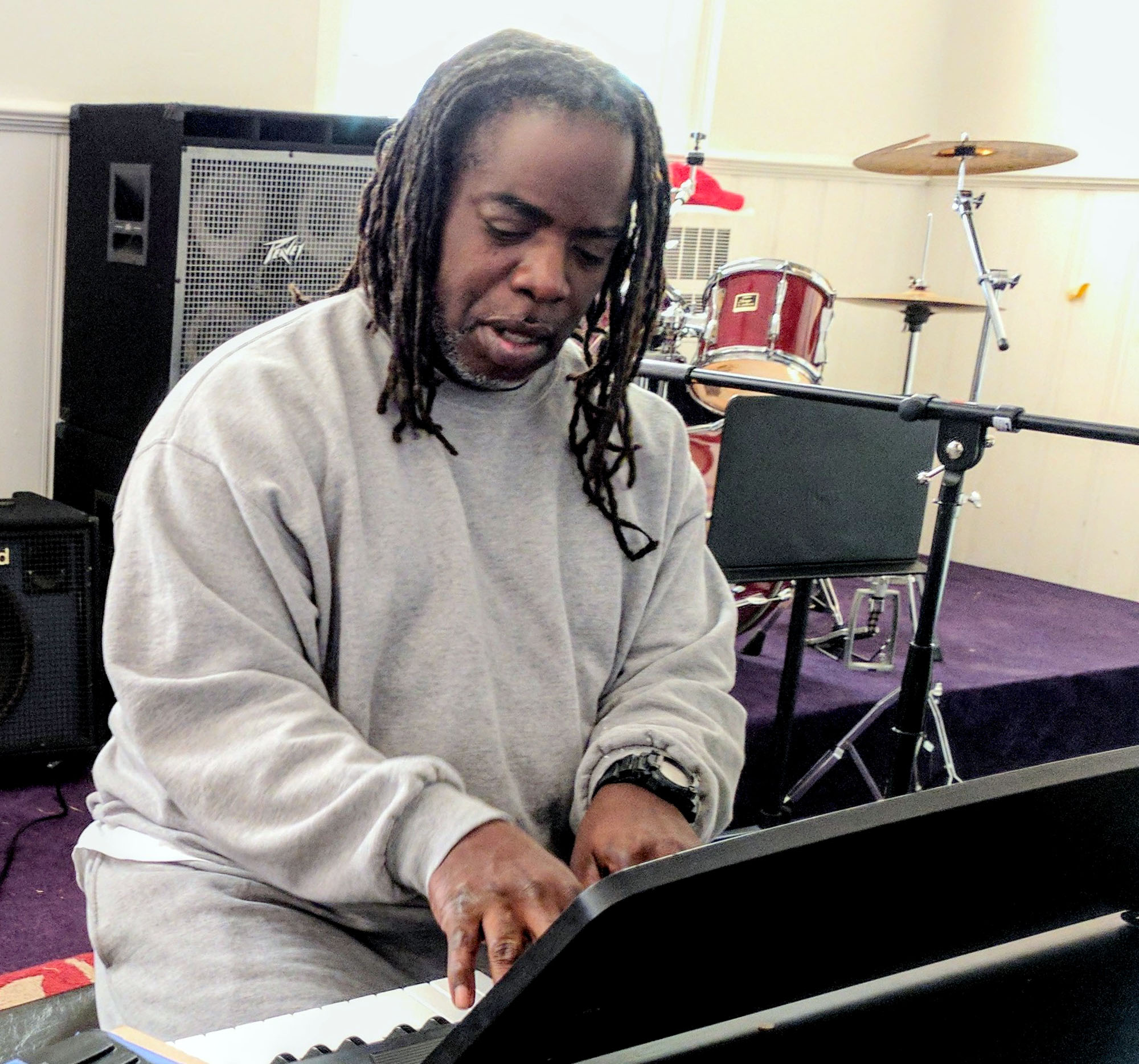 Willis Brown plays the keyboard at Antioch Baptist Church in Durham. Brown says that he’s more familiar with organs, since that’s what he grew up playing, but he’s able to play well on any keyboard instrument. (Staff photo by Brian Shurney)

At the age when most kids start going to school, Willis Brown was already on his way to becoming an accomplished organist.

Brown is a musician and composer who has played in churches for all of his life. He’s most proficient on the organ, but he’s skilled on any keyboard instrument and also the drums. He was born in the Bronx, and his family has always put an emphasis on religion.

“I basically grew up in church,” he says. “My mother was an evangelist, and my father was a preacher.”

Brown’s family is as musical as they are religious.

“My mother sang, and my father had a singing group that started in the ‘70s, The Mighty Clover Gospel Singers,” he says. “Church music has always been a part of my life.”

Brown was only 6 years old when he began playing drums in church, but even at that age he wanted to explore music further.

“I used to tell my dad, ‘Every time the pastor gets happy, he jumps off the organ and starts dancin’. So, the next time he gets off that organ, I’m gonna get on and start playing,’” Brown says. “My father said, ‘Man, if you feel like God is leading you that way, then go ahead and do it.’

“So, when the pastor jumped off that organ and started shoutin’, I jumped off of the drums and jumped on the organ. I’ve been playin’ ever since.”

Brown says that people were always surprised by his natural skill on keyboard instruments, but his faith keeps him humble.

“I was musically inclined. It was something that God just gave to me,” he says. “There were plenty of times that I didn’t know the songs, but God had anointed me and blessed me to learn the music through his wisdom. Now I can play behind anybody.”

When Brown says anybody, he doesn’t just mean musicians. One of his talents is playing the keyboard behind pastors’ sermons, shifting the way he plays while observing the mood of the congregation.

“I play based on the way I see people feel and how they react,” he says. “Sometimes people be down for so long, they need some uplifting. So, if I can be a help, that’s what I like to do.”

Diane Garrett, Brown’s significant other, says that Brown has a gift for music.

“I just love to see his fingers go across the keys,” she says with a laugh. “A lot of people that can play a piano can’t play an organ, but he can play anything. He’s really talented.”

Brown says he likes many different types of music, which all influence him, but his favorite is gospel.

“Sometimes my significant other will say, ‘You’re going to listen to the gospel all night? All night?’ and I’m like, ‘Yes, all night,’ because it consumes me, you know?”

For the past two months, Brown has had an unofficial position playing keyboard for Antioch Baptist Church. Rev. Michael Delano Page, the pastor of Antioch, says he appreciates Brown’s skill set.

“He’s a creative musician, and he has a lot to offer,” Page says. “He’s doing an exceptional job.”

Brown says he’s happy to play for any church. His goal is to lift the spirits of everyone in the congregation.

“However they come into the church,” he says, “they might be feeling bad or down, but when I begin to play, they feel uplifted. Whatever they were going through that whole week, they’re gonna forget about it while they’re here.”

Brian Shurney of Cary is a sophomore at UNC-CH double majoring in journalism and music. With the Durham VOICE he is serving as the multimedia editor.