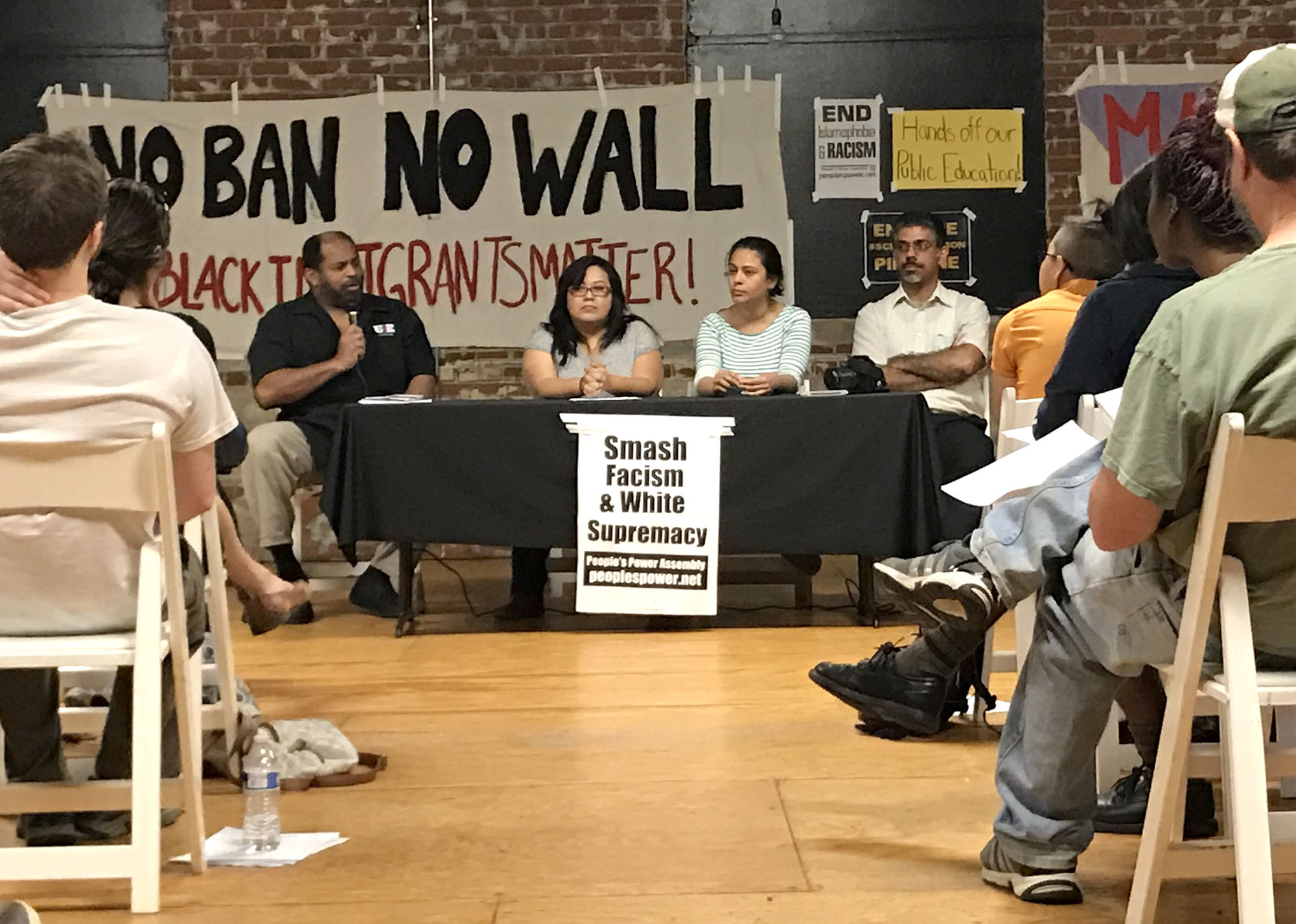 A panel comprised of representatives from various social and economic justice organizations engages in conversation with its audience . (Staff photo by Bryce Lapping)

The Triangle Unity May Day Coalition held a “Triangle People’s Assembly” Saturday, the third such event since President Trump’s election. The assembly hosted representatives from a variety of social and economic justice organizations at The Palace International, a Durham restaurant started by two Kenyan natives.

The Triangle Unity May Day Coalition formed in 2016 to organize a rally for International Workers’ Day, May 1. The event was a success, and the newfound coalition remained intact. Now, they hope to increase their membership and fight for progressive causes. 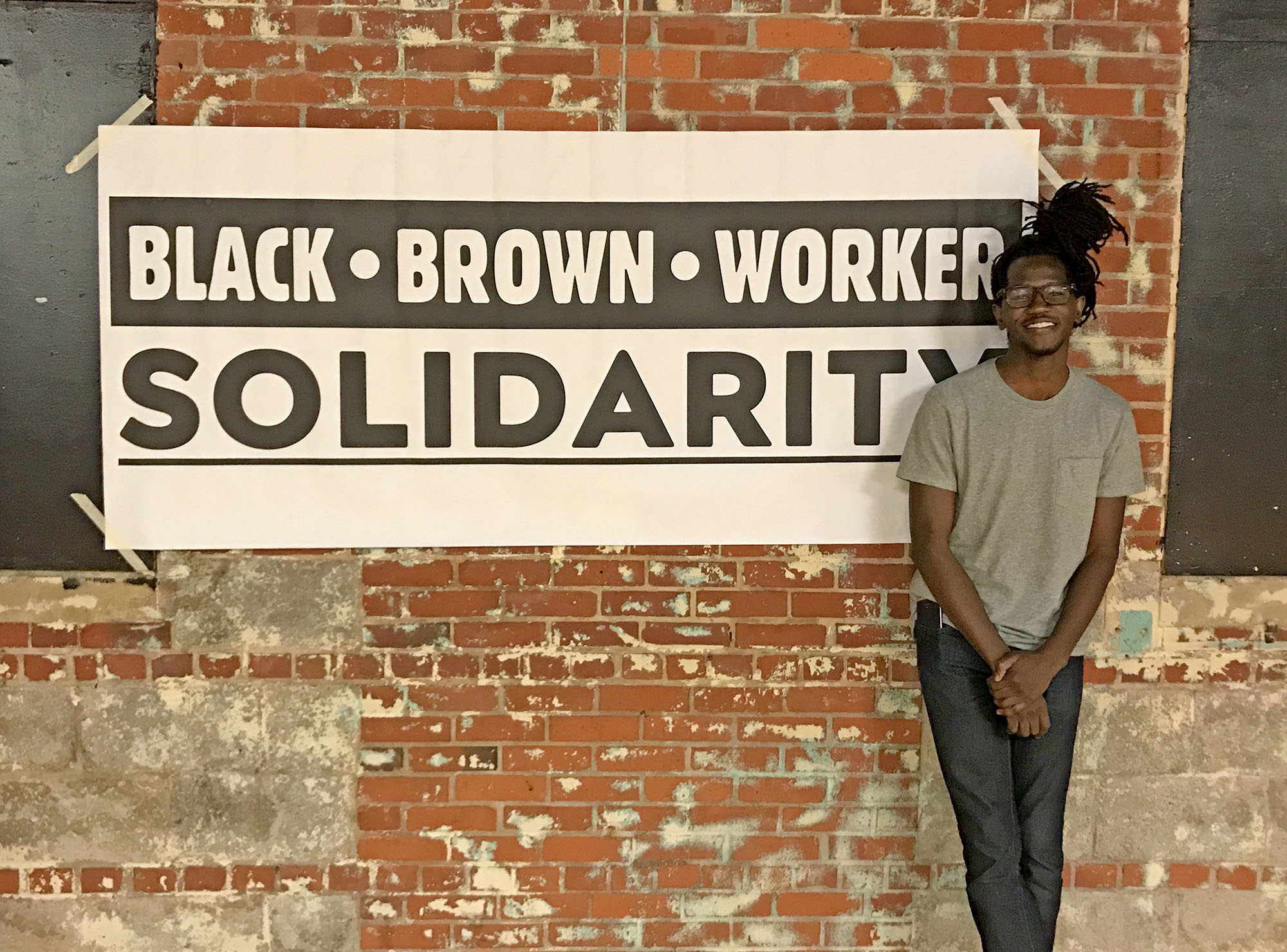 Durham resident Moses Ochola stands in front of a banner advocating for a cause for which he stands. (Staff photo by Bryce Lapping)

“There needs to be a front and a coalition on this end to create a voice for the people,” said Moses Ochola, a lifetime Durham resident and Palace employee. At the moment, people are disenfranchised with the Democrats and Republicans, he said.

At the assembly, speakers and members alike agreed consistent activism is needed, criticizing protesters who only participate when it is convenient.

Ochola compared the current progressive fight to what the Tea Party did eight years ago.

“On the progressive side, there needs to be a front and a coalition … to create a voice for the people,” he said.

The Triangle People’s Assembly allows organizations to unite around a variety of causes. Immigrant rights, worker and union rights, fighting against Islamophobia and standing with Black Lives Matter made up the meeting’s agenda.

Manzoor Cheema, the founding member of the North Carolina organization Muslims for Social Justice, spoke to the assembly about tolerance and love throughout the community.

“This is a time where a people’s assembly is more important than ever before,” Cheema said. “We are seeing attacks on all people. People especially of color, workers, Muslims and immigrants, refugees, LGBTQ, women… are under attack.”

Cheema placed great emphasis on the union of the progressive causes that gathered for the assembly.

“This is a time where we don’t have the luxury to be isolated,” Cheema said. “Our movement cannot be fragmented.”

Angaza Laughinghouse, a leader with Black Workers for Justice, set urgency as a condition for success.

“How many of y’all think that there’s a serious crisis?” he asked. “If not, I don’t think this assembly’s gonna take us where we need to go.”

Laughinghouse advocates for deeply rooted change as opposed to short-term fixes and called out affirmative action as a policy that falls short of a solution.

“We’ve got to decide what is our agenda, how we’re going to fight for our agenda, and how we’ll move these questions forward in terms of making some sort of transformative change,” he said. “We can’t continue just to fight for reforms.”

Loan Tran, a Durham resident and director at the Youth Organizing Institute, attacked systemic issues and their relation to the marginalization of people throughout Durham, North Carolina and the United States.

“Poor people, particularly black working-class people, are made to feel like they are to blame for all of the issues that we’re seeing,” Tran said. “The reality is that it’s much deeper than that.”

Working-class minorities are being economically displaced, Tran said, resulting in unemployment or underemployment. Tran invited a broad critique of the country to explain this phenomenon.

“I think that what’s really crucial to remember, especially in this period, what folks are experiencing – whether it be unemployment or police brutality, or other forms of violence – that that’s the result of a deeply – a deeply faulted economic and social and political system.”

Tran hammered the necessity for individuals to realize the unfairness of such systems.

Tran urged those affected by systemic issues to remain positive about themselves.

“Trust your experience and trust that what you’re going through is reflective of a deeply flawed system, and it’s not any character flaw of your own,” Tran said.

While the coalition has not yet announced a date for its next meeting, those interested in participating can learn more by following the group on social media. 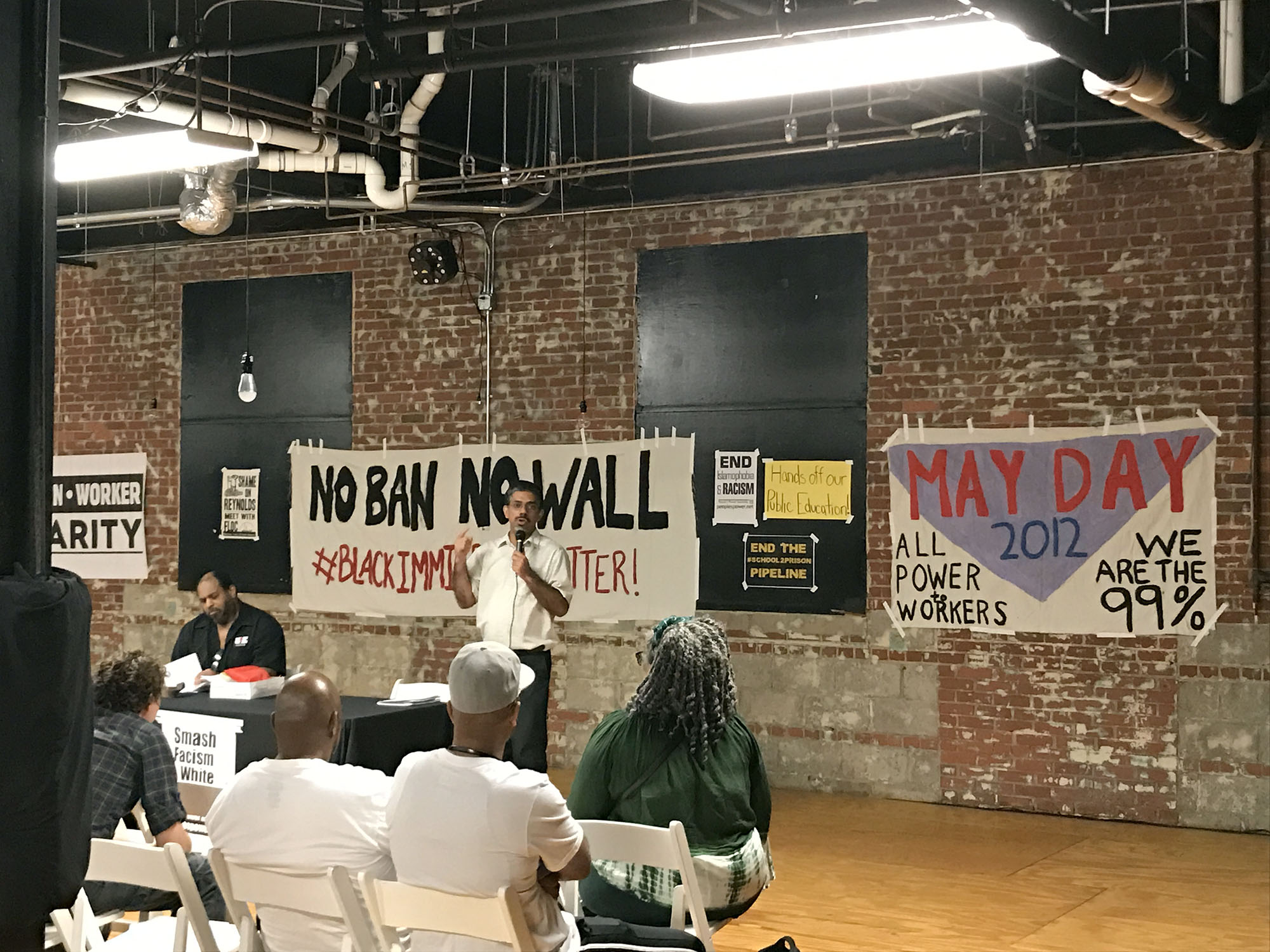 Edited by Jordan Wilkie. For a printer-friendly version of this story, click here.