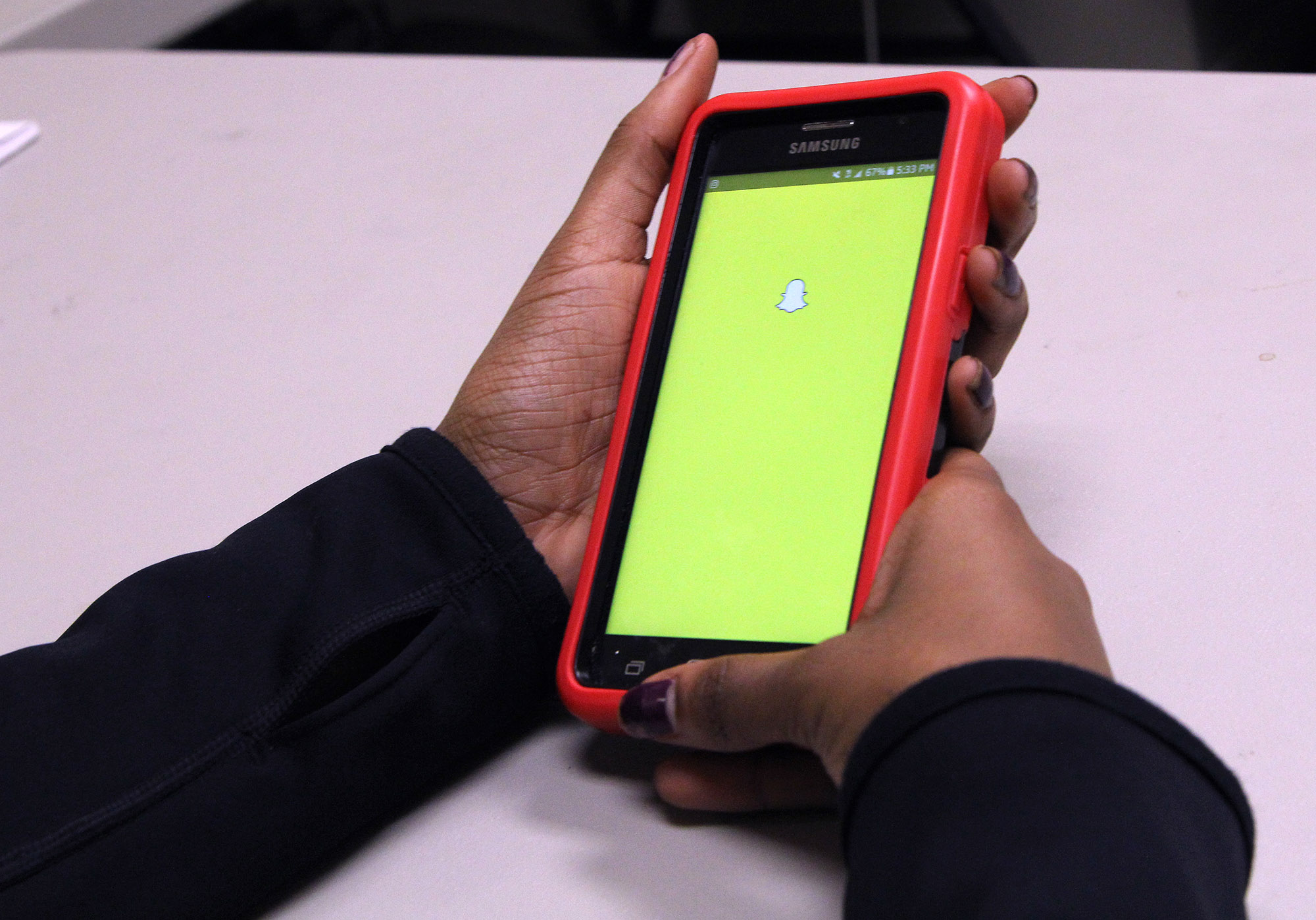 With 95 percent of teenagers using the Internet and apps like Snapchat or Instagram, there are all sorts of ways youth can get into trouble. According to the Office of Juvenile Justice ad Delinquency Prevention, the internet is also a new medium for gang communication. Social media allows gang-involved people to represent their gang, post threats, taunt and promote illegal activities. Social media can also escalate violence since it has potential to reach large audiences. (Staff photo by Veronika Payne)

Stalking, pornography, and school yard fights all dangers you run across while on social media. There has even been an increase in live streaming suicides among teen social media users.

The horror stories are all around us.

“It creates a negative vibe,” said 18-year-old Kyeru Evans. “A girl our age killed herself because of the bullying she faced on social media”

Social media users also have concerns about the level of privacy they have, but some don’t see an issue.

“I don’t find that social media is that dangerous because you can just block people,” Bryson Satterwhite, a sixteen-year-old Hillside student.

“People do have to worry about getting exposed on social media,” he added. “There are pages with naked teens.”

According to Enough.org, an organization attempting to make the Internet safer for children and families, the statistics can be shocking:

Social media can be dangerous in many different ways. One of the most extreme ways is people being put in danger due to trying to become the next “internet sensation.”

Trends and challenges such as the condom challenge, the cinnamon challenge, the salt and ice challenge and other crazy stunts teens and even adults try to become “internet famous.”

According to Brandwatch.com, it is estimated that 300 hours of video, some of which is often challenge videos, are uploaded to YouTube every hour.

Social media can be dangerous and put young children at risk if they are not monitored while using it.

She has also noticed increased Snapchat usage in class.

“Sometimes I have students come in and be extremely upset about something that happened in the ‘group chat’ or on Snapchat either after school or over the weekend,” said Wolf.

She said she is most worried about students doing something that will harm them either socially, financially or in another way.

“Sometimes in the moment it’s easy to get caught up and post something that you’ll regret later,” she said.

“In my profession I deal with young people who have a tendency of using their phones for bad, communicating threats and instigating fights,” Reed said.

There are other threats that as a dad, Reed worries about.

“It is a danger in a sense because you have child predators and those who have been lured into compromising situations and even those who have lost their lives,” he said.

But Reed said social media could have its “pros” also such as keeping in communication with friends and family far away and staying on top of current events.

Although social media has created concerns and has flaws, social media users are ultimately the determining factor of how and what it can be used for.

“In general social media is not as bad as one may think,” Reed said. “Ultimately in the end it boils down to the individual and how they choose to use it.”

Veronika Payne is a senior at the School for Creative Studies. She is serving as a Partners for Youth Opportunity intern for the VOICE