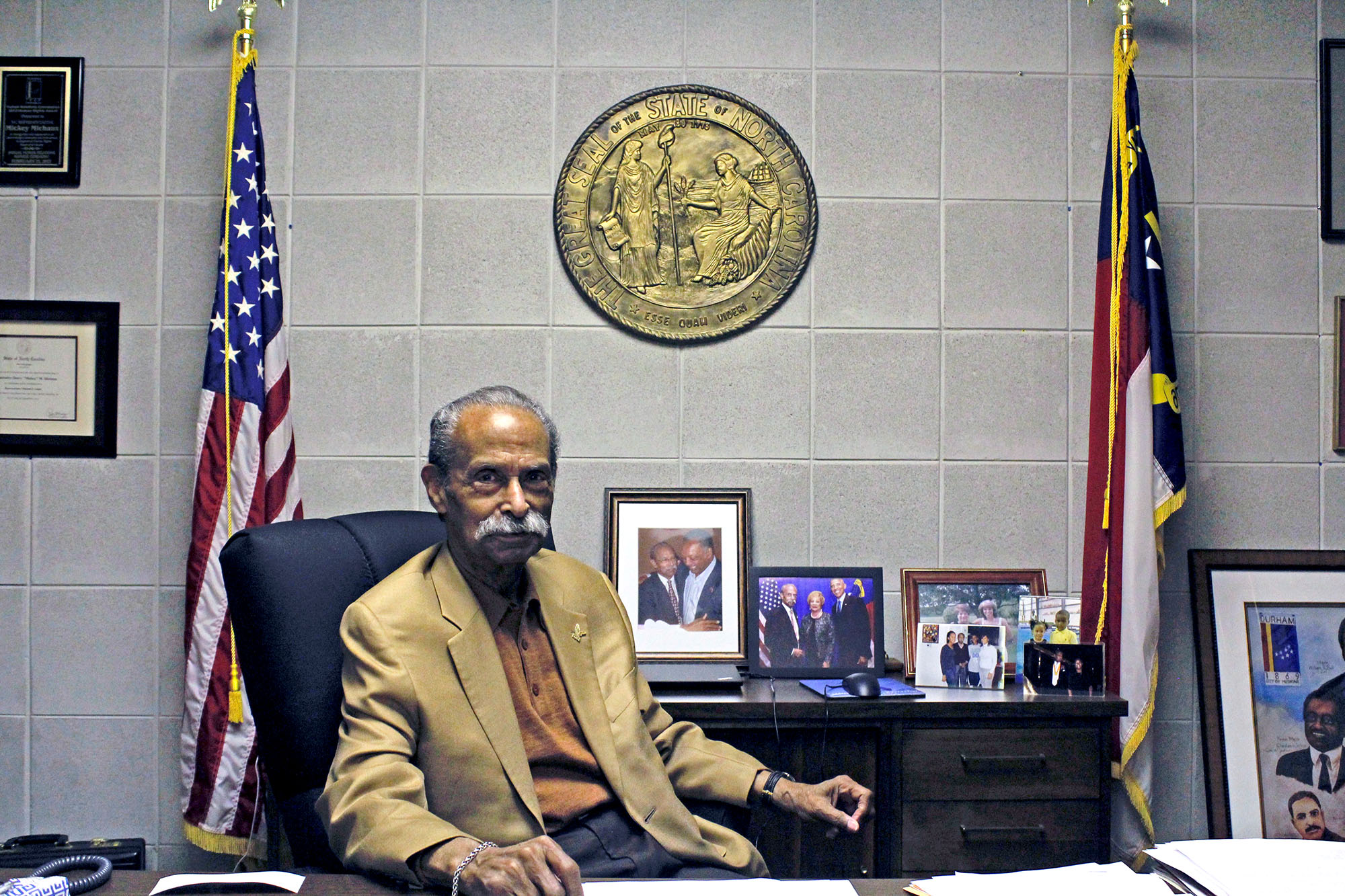 North Carolina House Rep. Mickey Michaux, 86, working out of his office in the Legislative Building in Raleigh. Rep. Michaux is a highly respected community role model in Durham, where he was born and raised in the Hayti district. (Staff photo by Sarah Redmond)

DV: What part of Durham did you grow up in?

MM: I was born, bred and raised in Hayti. I grew up around the NCCU neighborhood, and I can remember when there weren’t but three buildings on that campus. My father was a close friend of the founder, Dr. Shepard. His mother used to bake me black walnut cookies.

DV: What was the best part about growing up in Durham?

MM: The best part about growing up in Durham was being part of a diverse community. Durham, like North Carolina, is unique. We didn’t have the same civil rights problems as they did further south. Growing up in Durham exposed me to every walk of life you could think of.

It afforded me the opportunity to be in the presence of people who were contemporaries, heroes — the black folk you read about in history. I was influenced by them.

John Hope Franklin and I carried on conversations all the time. Thurgood Marshall, Marian Anderson, I interacted with them. Black artists, doctors, I was exposed to all that in Durham, especially black entrepreneurship.

Between Durham and Atlanta, these were the major seats of black entrepreneurship. Durham once had the highest percentage of black home owners in the South because we had our own institutions: banks, furniture stores, doctors, preschools. We didn’t have to go to the white bank to borrow money, we could go to the black bank. We had that degree of freedom.

DV: What spurred your decision to go into government and to become an N.C. General Assembly member?

MM: Martin Luther King Jr. and I were close friends. In 1956, near the end of the Montgomery Bus Boycott, I invited Martin to Durham. He said he always wanted to come to Durham. He came in and stayed in my mother and father’s house. We would talk and talk.

He said, ‘Mickey, we talk about public accommodations and voting rights, but we can’t do much unless we’re in the seats of power to make the decisions. We have to crack the political power.’

I finally decided that maybe he was right, and in 1964, I ran for a seat in the North Carolina House of Representatives. I lost that election by 120 votes. … But when a position opened up in 1972, I ran for it and won.

DV: What was your relationship with Martin Luther King Jr.?

MM: He was a good guy. The man was a friend. He would just come in and get some of my mother’s cooking, and we would just sit and talk. We had something synergistic between us. And man, he loved my mama’s cooking.

DV: What’s your favorite part of the job?

MM: Being able to do something for people. I’ve had the opportunity to go to the North Carolina Senate, but I said no. I’ve just been here, at the NC House of Representatives, 38-39 years. You’re closer to the people here, and having grown up in the neighborhood, you get a feeling about what people want.

I wasn’t born poor or anything; I was in a middle class black neighborhood. I had opportunity others didn’t have, but I always brought it back to the community. I wrote a majority of the voting laws, like the first law opening up voter registration.

Once you get into the system and find out how it works, you can always make it work to your advantage. I was Senior Chairman of the Appropriations Committee, which handles the state budget, for four years. Lot of folks regretted putting me there. Paul Luebke was the Chair of Finance, so together we were the Durham mafia. He raised money, I spent the money.

DV: Any upcoming initiatives that you’re excited about?

MM: Trying to get those voting rights back on the books. Trying to address grievances that affect communities like Northeast Central Durham. We need better infrastructure and all of that. But I don’t know how much longer I’ll be around here.

DV: What’s special about representing the people of Durham in particular?

MM: It’s the fact that I give back to the community what they’ve given me. I can right the wrongs in the community. On a state level, I can steer funds toward that community, like federal grants for housing funds, so infrastructure can be bolstered.

DV: Do you get a lot of feedback from your constituents in Northeast Central Durham?

MM: No, not as much as I should. I talk to leaders and so forth who come to me, so I’m aware of the problems. When I was growing up, my father ran an insurance business, he did property management. I used to go around collecting rent when I was 8 years old. I got to know people and conditions, other than conditions I was living in. It’s how I got to be able to empathize.

DV: How would you recommend Durham residents get more involved in the political process?

MM: I hear from them, but I don’t hear enough. I want folks to tell me what needs to be done, what I have missed, and how they think things can be made better. No question about it, like Martin said, we have to be in the seats of power.

We’ve got economic power, and every kind of power you can think of. We have the political power, but we don’t use it. Like David fighting Goliath, we have to take all of our rocks, which symbolize the vote, and kill Goliath.

I’m here. Call me, email me, come in person. People need to become more engaged. They need to talk with their politicians. Something goes wrong, you call me.

DV: What do you think about the gentrification that’s happening in Durham right now?

MM: I’m particularly concerned about people who have lived in the community so long. Now, people are going and buying up property and remaking the whole neighborhood so taxes go up and folks can’t afford it.

We want to alleviate that problem. Those people who have lived in the community so long, they live on fixed income, they can’t pay those taxes that are increasing. We can try to give them relief on state tax laws.

MM: For Durham: growth. We are growing rapidly at a rate that we had never known in the past. Durham has become a center, and we’re getting some crime with that. We need to temper growth. We want to grow in the right direction, and that’s determined by the constituency.

For North Carolina: changing attitudes. We have a responsibility to pass laws, but that doesn’t do anything. You can’t pass a law to make me love, like or hate you, but you can pass a law to make me respect you. Once we get respect for everybody out there, it’s a change of mindset that has to be done.

DV: What do you think of Trump and the new administration in the White House?

MM: I think it’s the worst thing in the world. We are now beginning to face the national nullification of the needs of the needy. That’s where we’re going, no question about it. We can fight by making people aware of the shortcomings. We’ve got to change that psyche, that mindset, by showing them.

The only difference between you and me is that I have more melanin in my skin. I bleed the same way, I function, I do everything everyone else does. We’ve got to try to affect people with a mindset that we are all one.

‘Make America Great Again’ means ‘Make America White Again’, that’s how I define that. If you don’t know your history, it has a tendency to repeat itself. That crowd in Washington now is gonna set us back.

You got all these billionaires sitting as cabinet members. Hitler did the same thing. He’s commander in chief of the armed forces; when things don’t go his way, he could nationalize everything and take us back.

DV: You also were an honoree at this year’s African-American History Month Celebration at Antioch Baptist Church. Tell me about that.

MM: It was nice. I appreciated it. It’s nice to get your roses while you can smell them. But let’s not waste time honoring folks; let’s get out and do something. If you want to honor me, make sure you get out and vote.

DV: So, you’re the longest-serving African-American in the NC General Assembly. What has that been like?

MM: I have no idea. It takes a while for that to sink in, it really does. Martin would be proud, he’d say, ‘See? I told you you’d make it.’ It’s an honor when people have enough faith in you to keep sending you back.

At this point in my life, though, I’m about ready to turn the reins over to someone else. Somebody much younger, with an understanding of how things are and what’s going on. And, someone who knows about history.

DV: What would be your advice to young black folks?

MM: Learn your history. Learn that where you are today, you just didn’t get there. It wasn’t handed to you on a platter. There are people that fought and died for whatever you have today. We need history to improve — we need to know that the fight still goes on.

It’s like, if you go from Wilmington to San Diego, you get halfway there in St. Louis, and you say ‘Wow, we’ve come a long way’ and then you stop. You still got a long way to go!

Basically, you make things better by understanding where you came from. If you don’t watch out and take your civic responsibilities seriously, you’re gonna be right back in a place that you don’t know nothing about. You’ll be subjected to the same types of things your ancestors were.

I remember Martin saying ‘I may not get there with you. But I want you to know tonight, that we, as a people, will get to the Promised Land.’ I say, we still haven’t reached the Promised Land, and we’ve got a ways to go.

DV: What advice would you have for those that want to go into politics?

MM: First, learn your history. Second, find out where there’s inequity and discrimination, where people need help. Work on those things and get a mindset that you need to give something back to the community. To make your own life worthwhile, you need to make others’ lives worthwhile.

I’m not the most perfect person in the world. None of us are. But, we still have to try and reach a degree of perfection by giving back.

Alexis Allston of Wendell is a sophomore at UNC-CH majoring in journalism, women's studies and creative writing. She is serving as co-editor of the Durham VOICE.