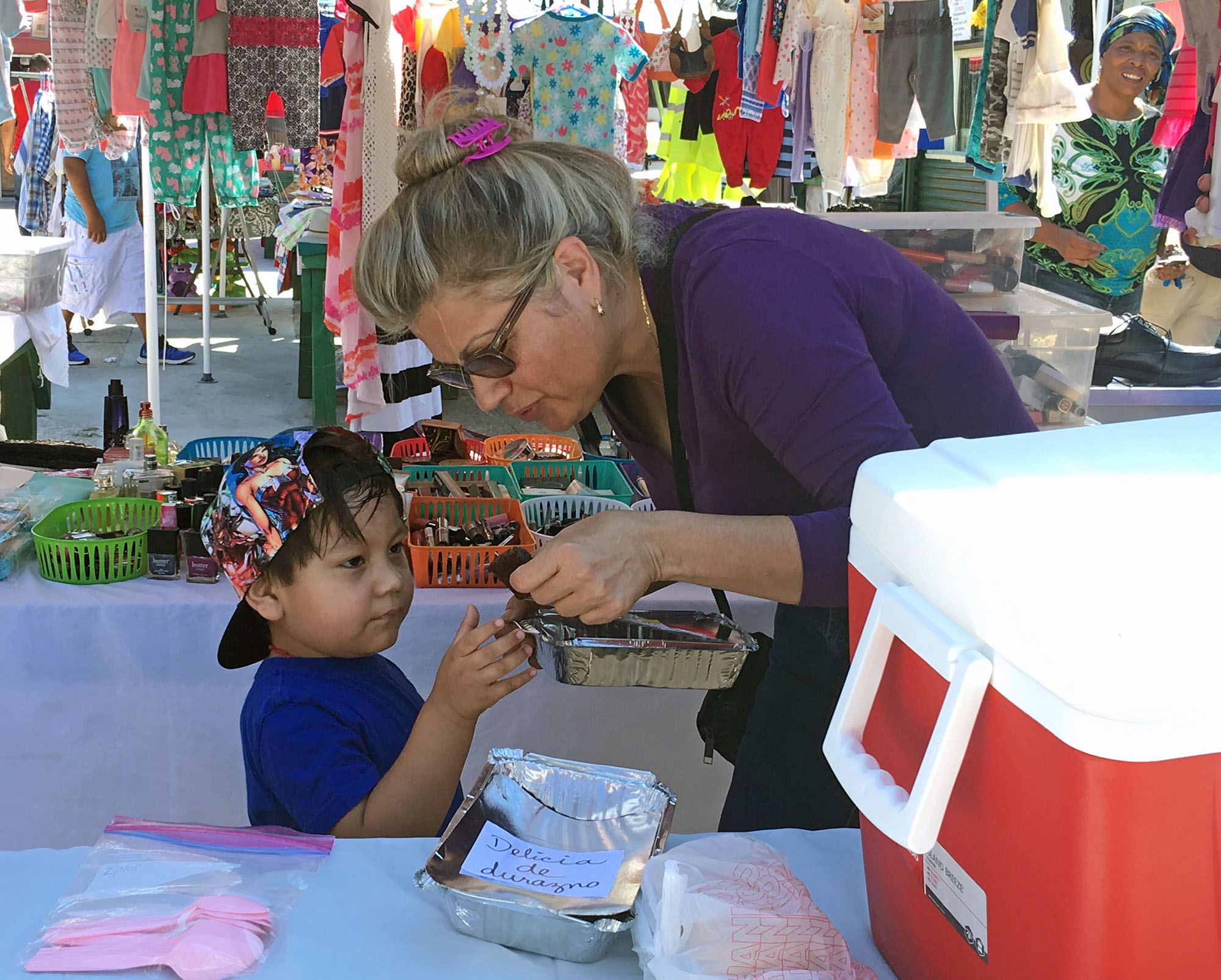 On Saturdays and Sundays, there is quite a bit of congestion on East Pettigrew Street, just past the intersection of Alston Avenue. But the traffic isn’t caused from churchgoers or construction — it’s the line of cars waiting to get into the Durham Green Flea Market.

Boasting over 150 vendors, with items ranging from clothing and toys, to appliances and computers, it is Durham’s largest flea market. Opened in September of 2008, it has seen steady growth over the years, and new vendors are being added every weekend.

Manager and Co-owner, Trans Perry, is a Durham native. He and his father, Robert Perry, started the market with quality produce. It was the main way for the community to buy and sell goods and groceries. “People do sell typical flea market stuff,” Trans Perry said. “But now, you can come get authentic Latino food. From Salvadoran, Mexican, Colombian; there’s lots of different cultures.” 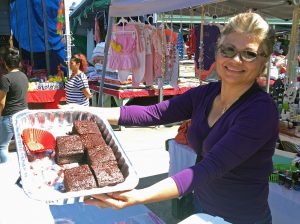 Ana Durán Garcia, 57, holds up her sweet treat with a smile.

There’s also a car wash station in the parking lot, computer repairs, and an African attire store. Whatever needs to be bought or sold — whether in a booth, a table, inside or out, rain or shine—Durham Green Flea Market appears to be the place to do business.

One of those entrepreneurs is Ana Durán Garcia, 57, who spent her first weekend as a vendor at the market. She smiled at the people passing by, inviting them to try a taste of her homemade pan de elote. It is a traditional Mexican sweet bread, made with a few simple ingredients, the main being corn. As potential customers taste-tested, she explained how her recipe was purely corn, with no flours, creating a rich and smooth sweet bread. A chocolate version was for sale, along with some frosted cupcakes and sprinkles.

“This place is a way, an opportunity to give people your food, your things, or whatever it is you want to sell,” Garcia said. “It’s all about what you can give. This is better than a store, because there are more people.” 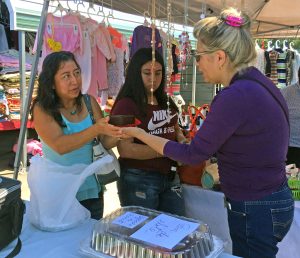 Ana Durán Garcia sells a piece of her pan de elote to a customer.

Garcia left Venezuela two months ago to come to the United States, due to political and economic strife. “It’s a disaster,” she said of her home country. “Never did I imagine being here. God has the plan, and I received it. Now I am here in the United States. I met a man on Friday who I let try my pan de elote. I gave him my number, and then he and 20 other people bought some.”

Stories like Garcia’s are not isolated instances. “Our demographics used to be different, in the beginning,” Trans Perry said. “The Hispanic community has definitely embraced the market. They are extremely entrepreneurial.”

This becomes evident around every corner. All the conversations being spoken in Spanish, along with the smells of carne asada and chorizo wafting through the air.

“What it takes to start a business in life is a spirit of achievement, perseverance, joy, and a good attitude,” Garcia said. “Charisma is what brings people to my table. When you smile, the people smile.”

As the day wound on, Ana’s enthusiasm didn’t wane. She called out, holding her finished product, “Pan de elote!” to almost every person that passed, with a smile on her face. A passerby who tried and purchased one confirmed her claim.

“It’s nice. I congratulate her,” remarked her daughter, Sharelys, 31, on her mother’s business.

Garcia hopes to return to sell her pastries at the market in the coming weekends. “God willing, I will be back,” she said. “Today, may be nothing. Tomorrow, God will give. I give thanks for everything, every day. I’ve been a part of the Franciscan Saint Mariana Catholic Congregation for over 30 years. I am a woman of faith.”

Durham Green Flea Market plans to expand. Perry hopes to acquire some of the surrounding land to increase the size of market, along with potentially opening during the weekdays for activities like arts and crafts.

“We want all of Durham, from black, white, Hispanic, Asian — we want to be the place to go for everyone,” Trans Perry added.

For those who are feeling entrepreneurial, Garcia had one final piece of advice.

“He who perseveres, wins.”