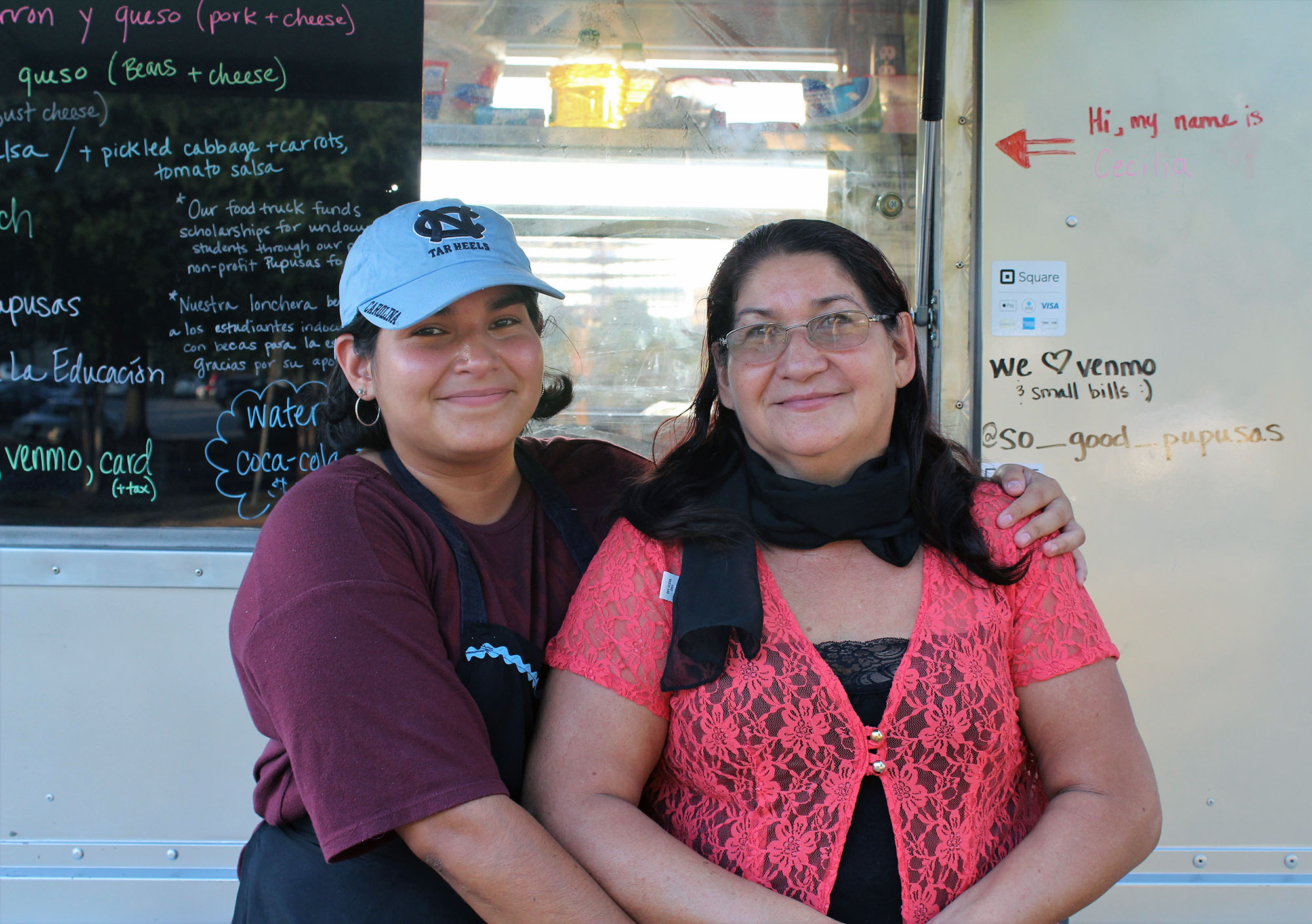 Cecilia Polanco and her mother Nora pose for a photo in front of their So Good Pupusas food truck on Thursday, Sept. 28. (Staff photo by Allison Tate)

It’s only noon, but the temperature in the parking lot of the Latino Community Credit Union is already closing in on 90. Still, the heat has nothing on the small, silver food truck parked in the corner of the lot.

Inside, Cecilia Polanco and her mother Nora are dishing out pupusas fresh off the flat-top griddle.

Since 2015, So Good Pupusas has been selling the thick, corn-flour tortillas filled with the customer’s choice of queso, chicharon, frijoles y queso or ayote. The tortilla is usually served with curtido—pickled cabbage and carrots—and tomato salsa.

Feeling adventurous? Go ahead and order it primo. That is, topped with spicy Cheetos.

“It’s a very genuine, authentic part of who we are,” said Cecilia of her family’s Salvadoran tradition of pupusa-making.

On this late-September Thursday, Cecilia works the window and the flat-top as Nora pats, fills and pats again the pupusas that will be served today or tomorrow when Cecilia caters 300 of them on UNC-Chapel Hill’s campus.

Cecilia and her family founded So Good Pupusas during her time as an undergrad at UNC-CH. In the early 1990s, her family emigrated from El Salvador to Los Angeles, where Cecilia was born in 1992, before moving to Durham just before her first birthday. 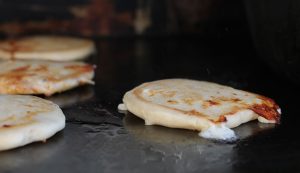 A pupusa sizzles on the flat-top. Pupusas are filled with the customer’s choice of queso, chicharon, frijoles y queso or ayote and are usually served with curtido and tomato salsa. (Staff photo by Allison Tate)

Pupusas are a tradition that Cecilia hopes to continue. For now, she considers herself the apprentice to master pupusa-maker Nora. The hardest part about learning the trade? The recipe. Well, more like the lack of one.

Nora goes by her intuition, just as she always has. As she pats and fills the soon-to-be-fried tortillas, her hands serve as the measuring cups. Her intuition also takes the lead in mixing up the chicharon, the frijoles y queso, and everything else.

Even as Cecilia asks her mother to come up with a consistent recipe, her own intuition seems to be coming together. Later in the day, as she prepares more frijoles and curtido at Will & Pop’s Commissary, Cecilia doesn’t follow a recipe. As she mixes queso into the frijoles, it seems she’s judging it by experience.

“I have this big fear that I’m going to lose my customers’ loyalty and things like that,” said Cecilia. “But I realize that, if you make the food good and you try to make it your best every time, it’ll keep people coming back and it’ll keep them happy.”

Her skills were put to the test earlier this year when, just after starting up the food truck, Nora made a trip to El Salvador for five months. Cecilia said that the support of her family was important while her mother was away. Equally important were the lessons she learned about running a business, making pupusas and becoming confident in her ability to do both.

“Growing up, I was afraid that I wouldn’t be able to learn to make pupusas like my mom,” said Cecilia. “But now it’s my job to learn.”

Family is an important part of the business. The pupusas symbolize it, and her many cousins come out on Thursdays to the LCCU to eat them. During Thursday’s lunchtime, Cecilia’s cousin, Ivan Campos, along with his wife, Karisha, and son, Ivan Jr., arrive to place their order.

Ivan said that his family likes to support his other family members. He said that the pupusas are also a plus. 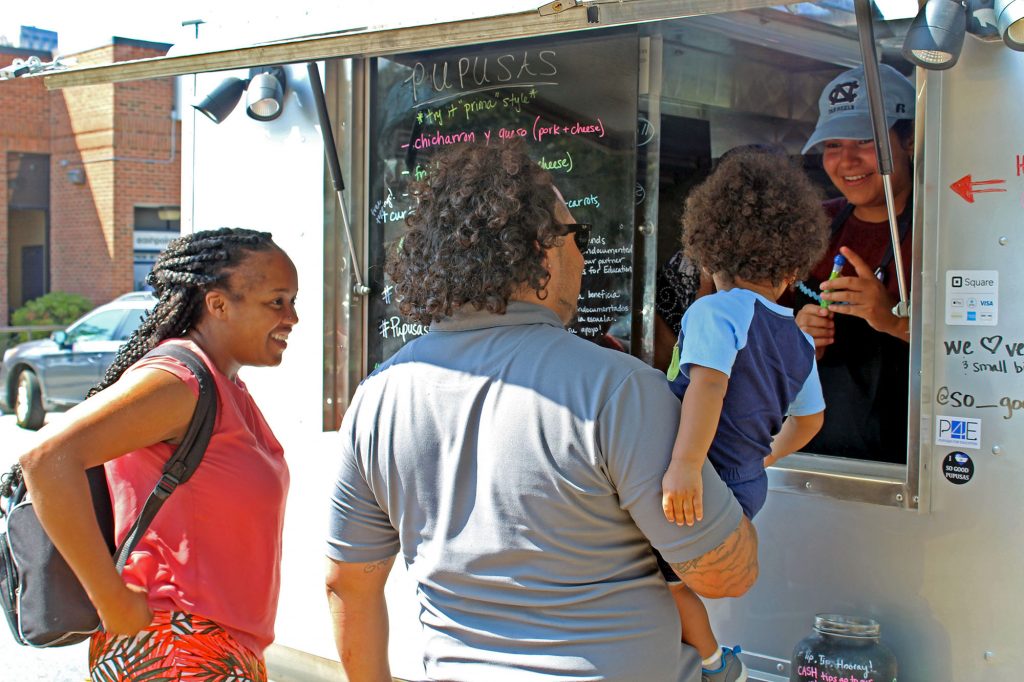 Cecilia’s cousin Ivan, along with his wife, Karisha, and son Ivan Jr., pay a visit to the food truck for lunch on Thursday. (Staff photo by Allison Tate)

The family business went a step further in 2016 when Cecilia and her family founded the non-profit Pupusas for Education. Funded by So Good Pupusas’ sales, it provides scholarships to undocumented scholars seeking higher education in Orange, Wake and Durham counties.

As of now, Pupusas for Education is supporting three scholars. Cecilia said that she wants to see the scholarship program grow, extending to state- and later nation-wide, and eventually becoming endowed.

Through UNC-CH’s Morehead-Cain scholarship, Cecilia was given a full ride to the university. She said that having the financial part of her education taken care of allowed her to think about what she wanted to do after graduation.

“That’s one of the privileges I had,” said Cecilia. “My education was for me truly to explore and see what I was interested in and what I could do.”

She said that, through the Pupusas for Education scholarship, she wants to give undocumented scholars the same ability to dream and plan for the future.

“‘If the possibilities weren’t limited, if the resources were endless, what could I do?’,” said Cecilia. “I think that question was one that I was able to answer, because I had a lot of privileges, and that’s kind of want I want to give forward.”

The So Good Pupusas food truck can be found every Thursday at the Latino Community Credit Union located at 100 W. Morgan Street in Durham from 11 a.m. to 2 p.m. for lunch and 5 p.m. to 8 p.m. for dinner. For more information about So Good Pupusas and Pupusas for Education visit www.sogoodpupusas.com