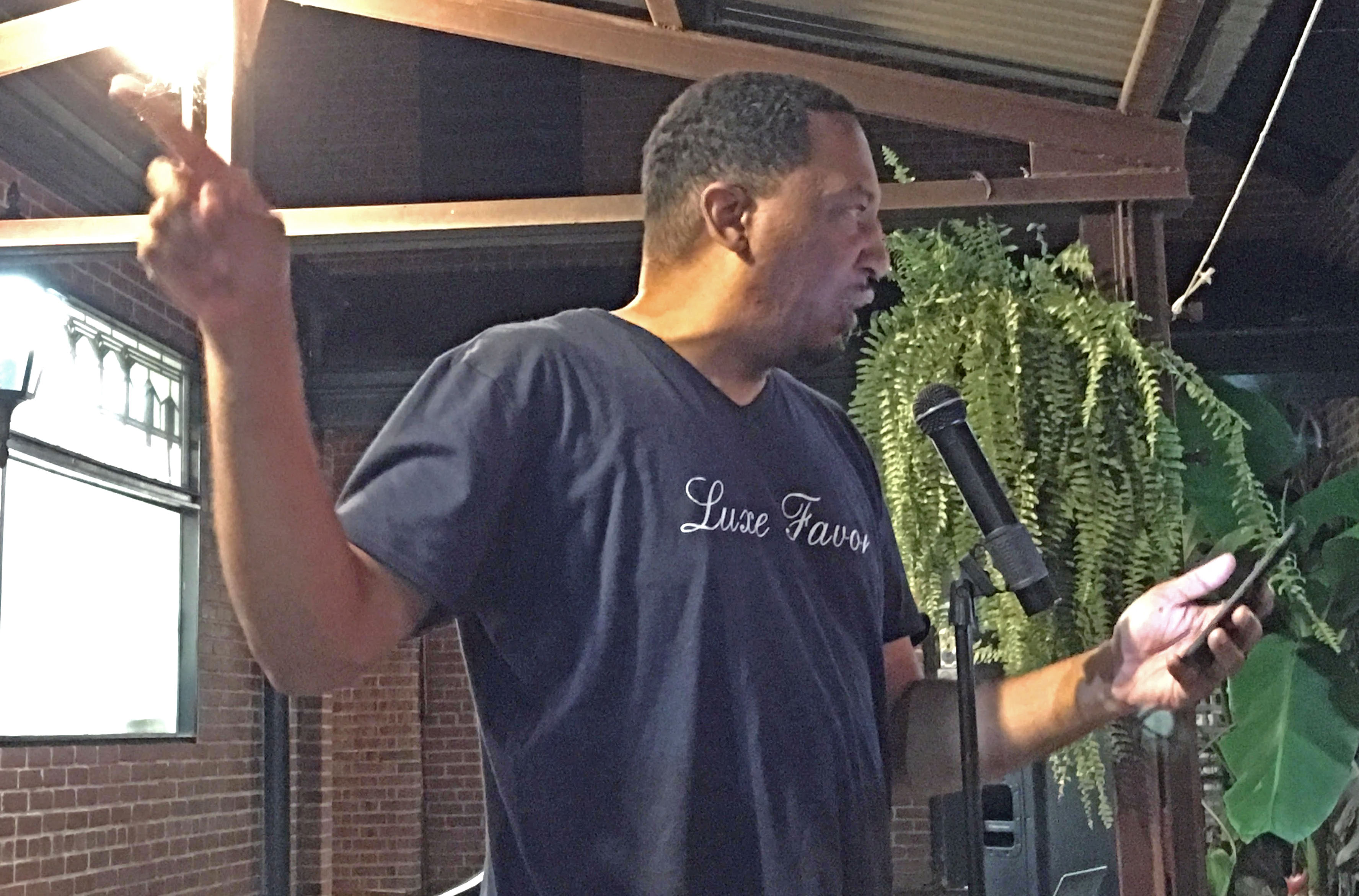 Smells of curries wafted around the open courtyard outside of Vimala’s Curryblossom Café. A DJ was setting up the sound equipment, along with the organizers of the open mic event finalizing the list of performers.

The message to the crowd was simple. If you have anything to say – whether it be poetry, song or rap – sign up to perform. 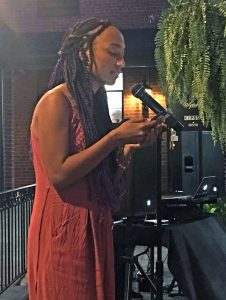 Ashley Harris, 24, UNC alumna and Durham resident is one of the founding members of Hear & After, a spoken word group. She was both the host and one of the performers. Friday night was Hear & After’s second event of the year, following the one earlier this month.

One of her mentors, Dasan Ahanu, the featured artist of the open mic, sat at a nearby table eating his dinner.

“Tonight’s event is a perfect example of a space where people can come together with different beliefs, agree or disagree, but in the midst of that art space, they are open to it all,” Ahanu said. “You can’t find that with any other type of installation.”

Ahanu, 43, is the co-founder of the Bull City Slam Team. Created out of the Jambalaya Soul Slam which was started in 2002, the team moved to the Hayti Heritage Center 2005 and has been supported by the St. Joseph’s Historic Foundation ever since. The Team won the Southern Regional Poetry Slam in Knoxville, Tenn., and finished third in the National Poetry Slam in St. Paul, Minn. in 2010.

Ahanu performed five spoken word poems for the audience, and the fourth and fifth were sneak peaks from his fourth book of poetry about to be published.

Some of Ahanu’s and Harris’ works performed touched on the black experience. Other spoken word was abstract and some performed rap and folk music. All of the art was creative, passionate and raw.

“My work is very Durham-heavy,” Ahanu said. “Particularly for two reasons: One, there’s just a culture of mixing across the artists – both in terms of background and ethnicity, but also in terms of genre. Two, – it’s not uncommon for artists to be a part of events of mixed genre, and from different walks of life, different demographics, orientations and identities.”

Ahanu says Chapel Hill and Raleigh have lots of arts, but they happen in pockets and don’t mix.

“I’m lucky that I get invited to lots of events, to the different pockets,” Ahanu said. “Let’s say I get invited to three events in other parts of the Triangle, and by the time I’ve been to all three, and I don’t see the same people, it becomes very obvious that there are segregated artistic communities. In Durham, there’s nowhere. You can’t show up to three art events and not see the same people.”

The artists went up, one by one, many for their first time, and performed. From poetry, spoken word, to rap and acoustic guitar – the performances were diverse, along with the performers themselves.

Karen Xu, 17, was a new performer who read the audience some works of poetry she had written. The passion was audible in her voice as she performed, and she expressed excitement for the artistic community. “Art is the one thing that can break down barriers between strangers,” she said.

For many, though, spoken word isn’t just a social glue; it breaks down barriers and brings people together. It is something that is fiercely individual.

“I get irritated when people say it brings people together, because there are so many times where people have been brought together, it’s just that people don’t want to listen,” Harris said. “It’s a space where people get to tell their individual stories, which are important. A lot of the times, especially for people of color, or any other marginalized background, they are silenced all the time. You don’t get to speak up. You have to conform to make other people comfortable. Poetry and art is a space where you can be yourself.”

While Ahanu’s work is mostly concentrated in Durham, and Harris’ Hear & After group is in Chapel Hill, the bond between the two artists, along with the graciousness of Vimala, the café owner, for giving them the space to perform, marks the beginning of another year full of artistic expression and collaboration.

“We have a chance across the Triangle to bring people together in a room who might otherwise not have been in those spaces,” Ahanu said.