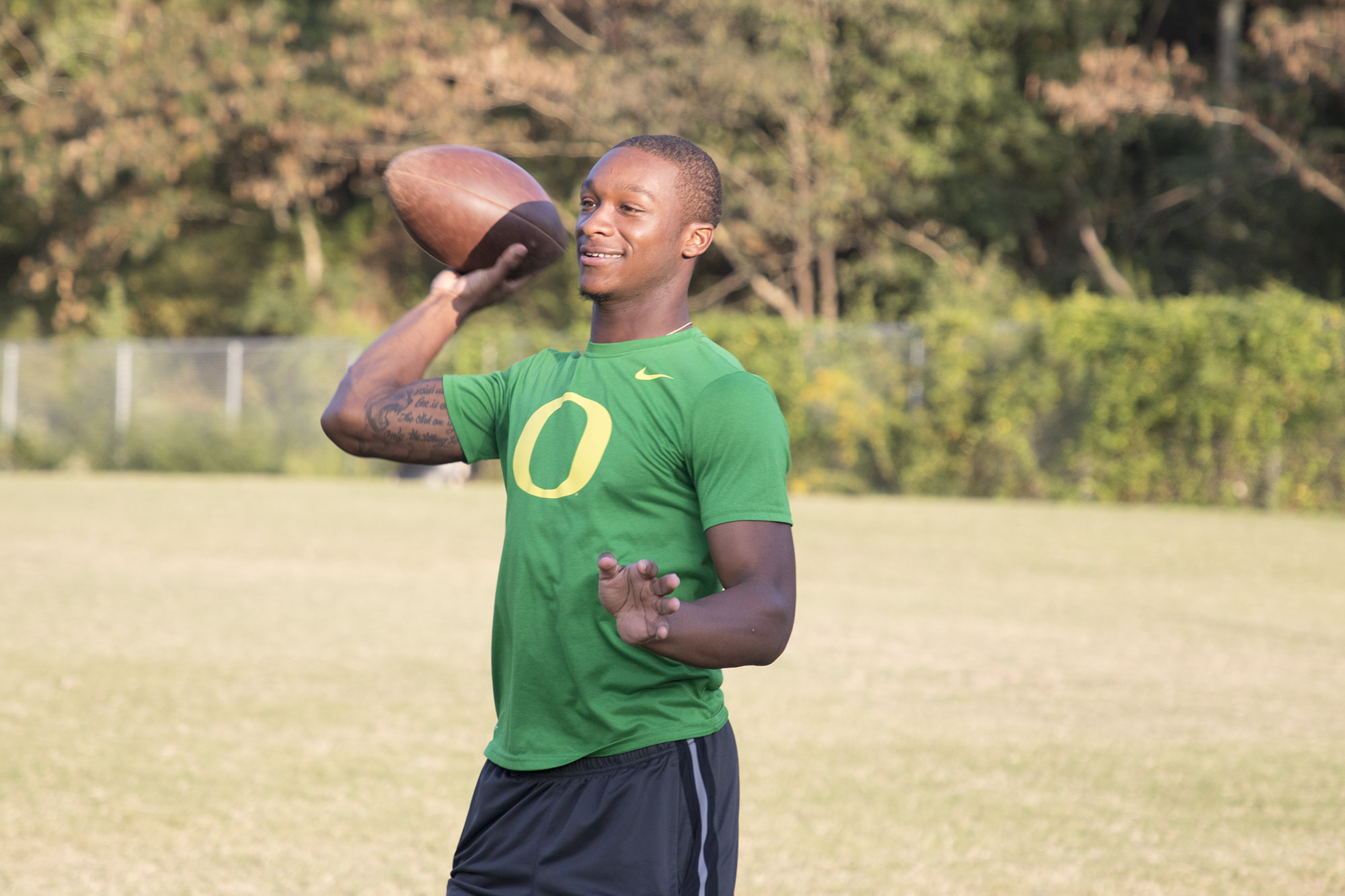 Jamal Elliott, star running back for the Hillside Hornets, will be out for the season due to a sports hernia. "He is an incredible talent," said running back coach Bobby Finch. " I haven’t seen anyone as talented as him in a long time." Despite his injury, Elliott still has his college career to look forward to at the University of Oregon. (Staff photo by Nile Foxx)

For the past three seasons, Jamal Elliott has faithfully taken to the field during nightly football practice. But last Wednesday,  he sat on the sideline and watched his teammates play.

Elliott is a senior, four-star recruit running back at Hillside High School in Durham. He has verbally committed to a full scholarship to play for the University of Oregon, yet, Elliott will miss the remainder of his senior year, due to a sports hernia sustained in the game against Dudley High School on Sept. 9.

Though missing a senior season is not enjoyable for him, Elliott is focused on the bigger picture.

“I just want to get healthy again in preparation for Oregon,” said Elliott. “That’s my focus.”

Elliott has been playing football since he was 5 years old. And coaches and players claim his talent was apparent at a young age.

“I’ve known Jamal since sixth grade, and the first time I saw him in a scrimmage he got hit by two people at the same time, and he didn’t go down,” said Myles Dillon, a junior on the team. “I was like ‘He is going to be nice when he’s older.’”

In fact, Elliott began practicing with the Hillside football team in eighth grade.

“I started getting a lot of attention in seventh grade, but due to NCAA rules, schools couldn’t talk to me yet.”

ESPN ranks Elliott as the 205th best player in the nation, so he is highly sought after by college programs. According to 247sports.com, he has scholarship offers from 23 schools to play football. Nevertheless, the decision of which school to attend was not particularly difficult for him.

Elliott describes himself as a “speed back,” which means he utilizes his quickness and vision instead of brute force.

“He is real explosive and quick,” said Caleb Harrington, a senior wide receiver on the team. “He has vision.”

Elliott said this played into his decision to commit to Oregon.

“It’s more of a spread, high-tempo offense, so I felt like I fit in more with the offense,” Elliott said.

His decision had its emotional aspects as well.

“I grew up watching Oregon,” said Elliott. “It was always my dream to play for them.”

While Elliott’s future seems full of promise, he remains realistic about a career in sports.

“Of course I have my eyes on the NFL, but more importantly academics,” said Elliott.

“Anything can happen at the college level – I could get hurt. So that’s why you have a Plan B.”

He plans to major in business administration and prepare for a career in the field while playing for Oregon.

Elliott’s importance to the team goes beyond his physical performance. He is an integral as a leader and a role model for other players.

Despite the untimely end to Elliott’s season, the team – which is 2 and 3 on the year – remains optimistic about their success.

Nile Foxx is a senior photojournalism major at the UNC-CH School of Media and Journalism. An Iowa native, this fall he is serving as photo editor of the VOICE.