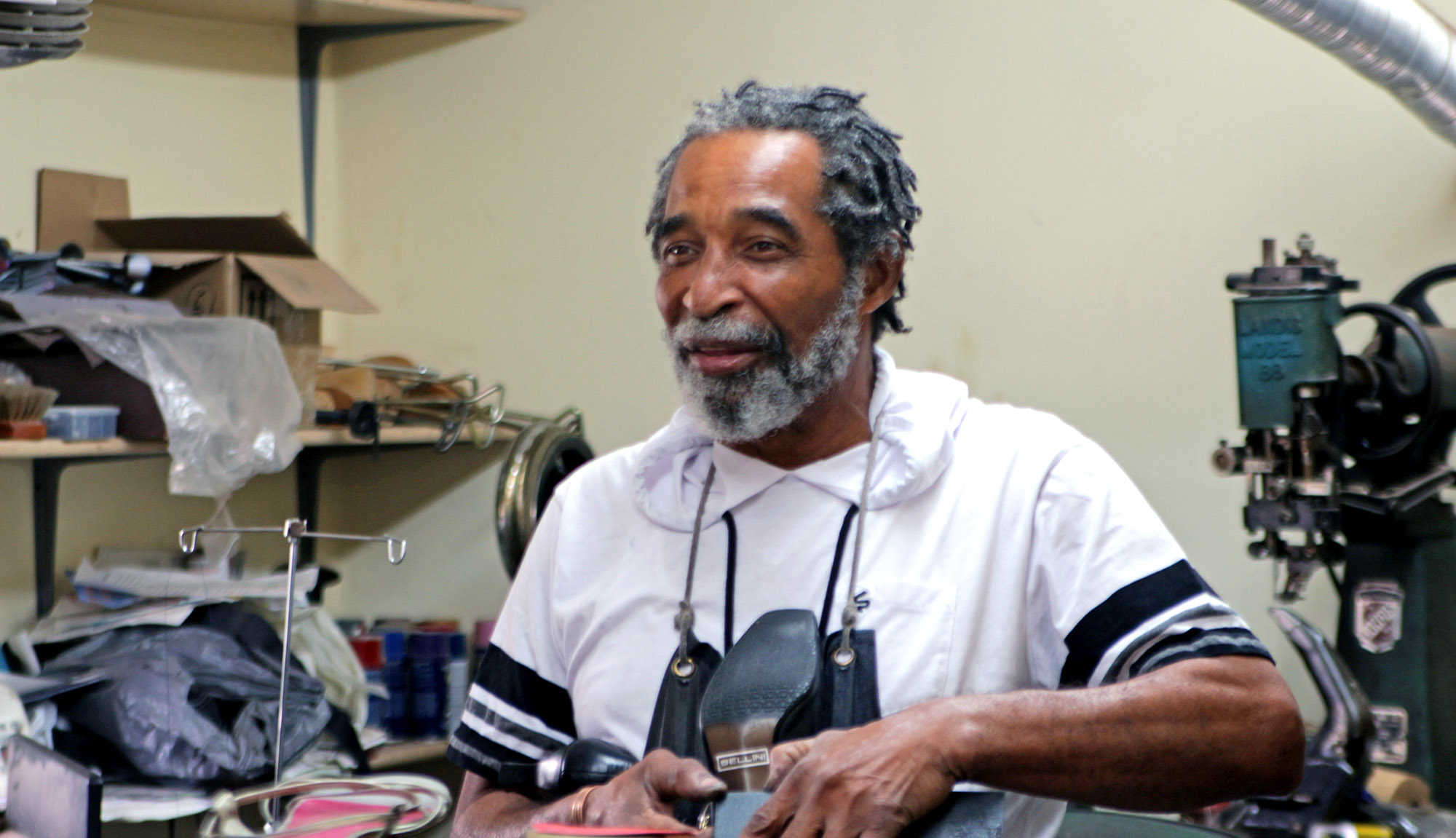 Amid the one-story homes around 506 Burlington Avenue, Love-Way Shoe Repair shop, run entirely by 70-year-old Gayford Caston has prolonged his niche-driven business for 32 years with the help of close-knit ties in East Durham.

Patrons looking to inquire about shoe restoration might be greeted with a slow widening smile from Caston; a “Hey, how are you?” followed by “me, I’m doing sumptuous.”

Locals and people just traveling through Durham might also walk in one day to see Caston sorting through his four shedloads collection of shoes. In the middle, they’ll find Caston polishing shoes, giving new life to old worn out toe boxes, all while holding a compelling conversation. 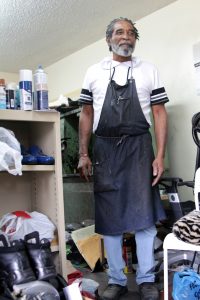 Caston takes a short break and learns about the Grand Unified theory from a walk-in customer. (staff photo by Autavius Smith)

“It’s just like how I talk to my kids. My son is in a civics class at school – that’s the most challenging class for him” said G. Christopher Dickey, Economic Development Coordinator of Durham, as he awaited the final touches of his dress shoes.

Caston raised both eyebrows as he listened closely with a black leather shoe in one hand and protectant spray in the other. His hands were covered in black ink markings from previous hours of heel trimming, shoe stretching, and detailing insoles.

“I said, son, well that’s the class you need to spend the most time in because that’s going to get you to understand how this thing operates,” Dickey went on.

The increased demands of a fast fashion industry have encouraged consumers to move away from restoring their old pair of heels and dress shoes to instead buying the latest shoes.

Cobblers across the U.S. have been pressured into offering more than just leather shoe services to remain in business. In 2016 there was an estimated 7,780 shoe and leather workers employed according to the United States Department of Labor, down from an estimated 68,000 in 1968.

Caston’s shoe repair business reflects what he saw around Durham in his earlier years growing up on Enterprise Street.

“I used to see on Pettigrew Street, Fayetteville Street, they had so many black businesses here in Durham,” Caston said. “I used to see these different people have their own business so I always wanted my own business because I seen that.”

Hearing Caston’s name over the intercom to report to the principal’s office was common at Hillside High School. One day his oldest sister Mary, encouraged him to attend high school in New York at Manhattan Vocational and Technical High School in the early 1960s. His entrepreneurial side became evident in his string of businesses he would eventually start.

“Before I owned a Record store, I went bar to bar for many years, selling jazz records on Lenox Avenue to 7th and 8th Avenue,” Caston said.

The youngest of four sisters, Caston, returned to Durham in the late 1980s and learned the craft of shoemaking. His new skillset, learned under the wing of his then trainer Sam Evans, allowed him to function independently.

Caston has acquired three patents in his 32 years of business, one of which has to do with an all-around air bubble in shoe heels.

However, a few years later, on December 25, 1973, Caston’s mother, father, and oldest sister were killed in a car accident. It was cold and late at night.

“That was my Christmas present,” Caston said.

Although the details of the car accident were largely unknown, Caston used that moment to “grow up a bit” and live up to his own set of created laws.

These guiding principles are now placed near the entrance to his door. The 6th law reads “be and do right accordingly, regardless of whom you engage or meet, and where you are.”

His recently requested court permission to change his name to “Brother Love” can be traced back to everyone who walks through his door, even the ones not so sure of his ability to fix things.

“No don’t be sorry, don’t you tell anyone that you’re sorry. You don’t look like a sorry person – excuse yourself and beg your pardon,” Caston suggested.