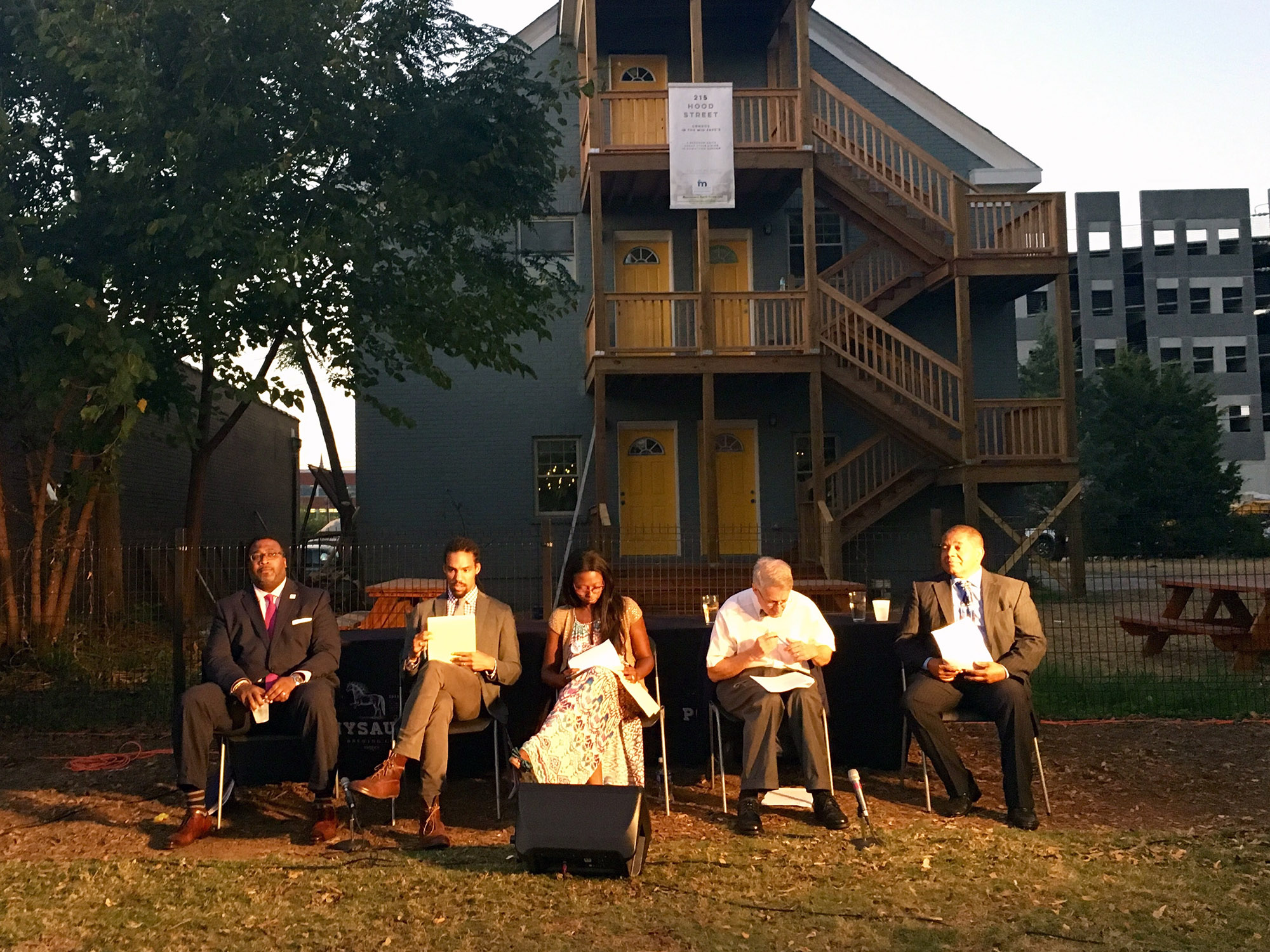 Five of the six candidates (from left to right, Farad Ali, Pierce Freelon, Shea Ramirez, Steve Schewel and Sylvester Williams) for Durham’s next mayorship prepare for the opportunity to share their thoughts on the city’s housing future. (Photo by Meredith Martindale)

Affordable housing is a hot button issue in Durham. Since major downtown revitalization began nearly 15 years ago, with developments like American Tobacco Campus and Durham Performing Arts Center, cost of living has shifted dramatically throughout the city.

Hundreds of engaged citizens gathered to watch each candidate respond to questions submitted by members of the audience and pre-screened questions from the Internet via YouTube live stream video and Twitter.

“I love seeing this many people turnout [to the forums],” said Mandel. “We are getting fascinating and challenging questions from the audience which is a tribute to our community.”

Similar to the multitude of previous debates held in anticipation of the November 7 general election, a majority of the discussion came down to two things; what the city has done to improve Durham versus where it has fallen short of its goals. The contrast tends to pit Schewel and his record as a member of City Council since 2011 against the other candidates who are hoping to leverage the city’s shortcomings as a way to attract anxious voters, who see issues like affordable housing as of the utmost importance, to their side.

“Affordable housing is a really important local issue in Durham right now and, as such, it’s an important issue for our next mayor,” said Meredith Martindale, Durham resident and creator of PictureDURM.com, a website that aggregates photos of Durham life posted by social media users. Martindale has attended both #MayorUp forums thus far and finds them both energizing and informative.

“It’s caused me to go home and do more research on my own… they’ve given me a lot to think about not only as someone voting in this election but also as an informed and active citizen,” said Martindale.

That level of civic engagement is the main reason the forum’s organizers committed to hosting the events.

“I have enjoyed the enthusiasm of the Durham audiences,” said Mandel.

Mandel has operated independent publishing company Clarion Content for the past several years since moving to Durham in 1997. Per the Clarion Content website, the company believes “the media has a duty to call to account government, corporations, individuals, and the People through thoroughly-researched publicly published work.” Clarion Content will host four mayoral forums during the election cycle on policing (September 6), affordable housing (September 27), equality of opportunity (October 4), and a post-primary debate (November 1). Mandel sees these public conversations as imperative to the democratic process.

“If we can’t have an exchange of ideas, if we can’t agree to disagree, to think about the other person’s perspective before shouting back with our own, how are we different than the fascists, the kleptocrats, and the totalitarians?” said Mandel.

Diversity and inclusion are frequently top-of-mind in the current political climate. Following the end of Wednesday’s debate, Mandel shared an impassioned speech as a reminder to the audience about what it means to participate in a democratic society:

More information on all the mayoral debates can be found at http://clarioncontentmedia.com/mayorup/.

Justin Laidlaw of Durham is a senior journalism major at N.C. Central University and a staff writer-photographer for the Durham VOICE.