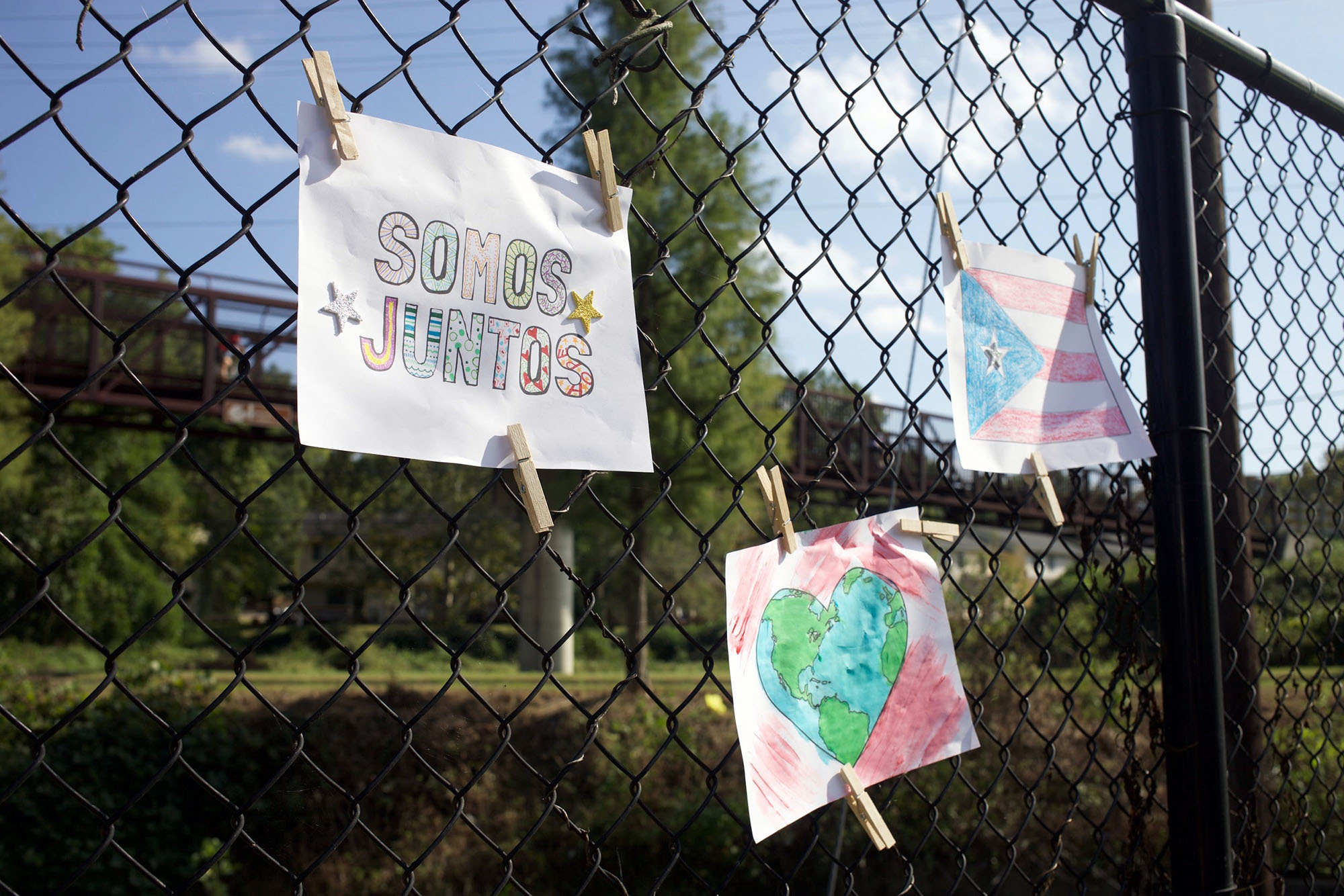 Attendees of the event were able to decorate pages to show their support for the victims of Hurricane Maria. (Staff photo by Gabby Bulgarelli/UNC)

Some of Durham’s creatives and small business owners nestled into a small parking lot just off of Durham/Chapel Hill Boulevard on Sunday. They were there with a mission: to raise money in solidarity with Puerto Rico.

Organizers Courtney OM, Autumn Nicholas, and Josephine McCrann have been working locally for some time, and knew they would benefit from developing a creative space together long before their recent settlement into their new home at 420 W Lakewood Avenue. 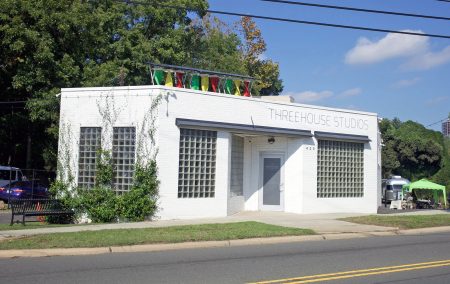 Threehouse Studios will be their new playground–boasting 30 yoga and 15 drop-in dance classes per week, a recording studio, housing for artists in residence, and more. But, before their grand opening on October 22, they knew they needed to demonstrate to the community what they had to offer. The three of them originally envisioned the day as one of celebration, and a chance to interface directly with their new community.

All of that changed a few weeks ago when Hurricane Maria struck Puerto Rico.

Steven James Rodriguez Velez, a dancer for Courtney OM’s OM Grown Dance Company, was in the Dominican Republic when he received word of the disaster. Velez, unable to connect with his family on the island, was extremely scared. In the days following the tragedy, he desperately wanted to help his family, but worried his presence would further deplete their meager resources.

Maintaining contact with his family became increasingly difficult as the island was ravaged by the storm, and Velez was unsure of what he could do. For everyone involved with the development of Threehouse, changing the studio’s soft opening into a benefit seemed like a no-brainer. 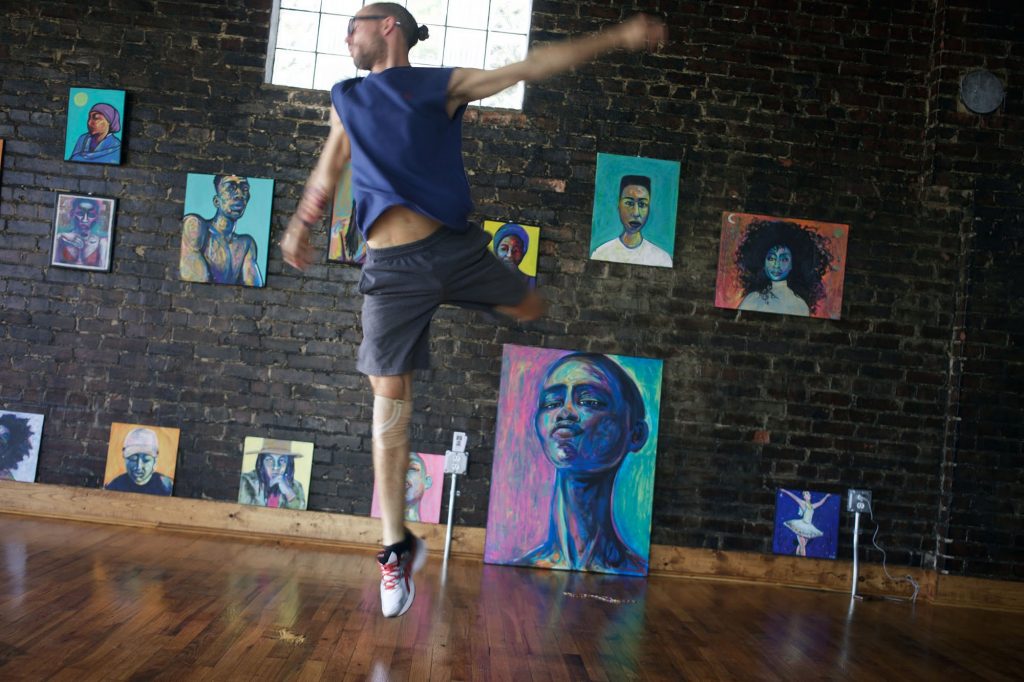 Steven James Rodriguez Velez dances in the new Threehouse studio in front of paintings by Gemynii, a local activist and DJ. (Staff photo by Gabby Bulgarelli/UNC)

“I needed to find a way to help without hurting in the process,” said Velez. “This is a way to do that. I’m so excited that they [Courtney, Autumn and Josephine] are breaking down barriers and building a family here. It has been so easy for the media to prevent Puerto Ricans from receiving the aid that they so desperately need, but they are humans. There has to be empathy with other humans.”

“I knew we had to make the change and support that community,” she said. “We’re still able to show everyone what Threehouse will offer, but while we’re building something new here we can help rebuild there.” McCrann, the studio’s yoga director, felt proud of how many people wanted to be involved in the fundraiser. The event included tarot card reading, local artwork, homemade popsicles, food trucks, hair-cuts, screen-printing, and more – all with proceeds heading to the relief effort. 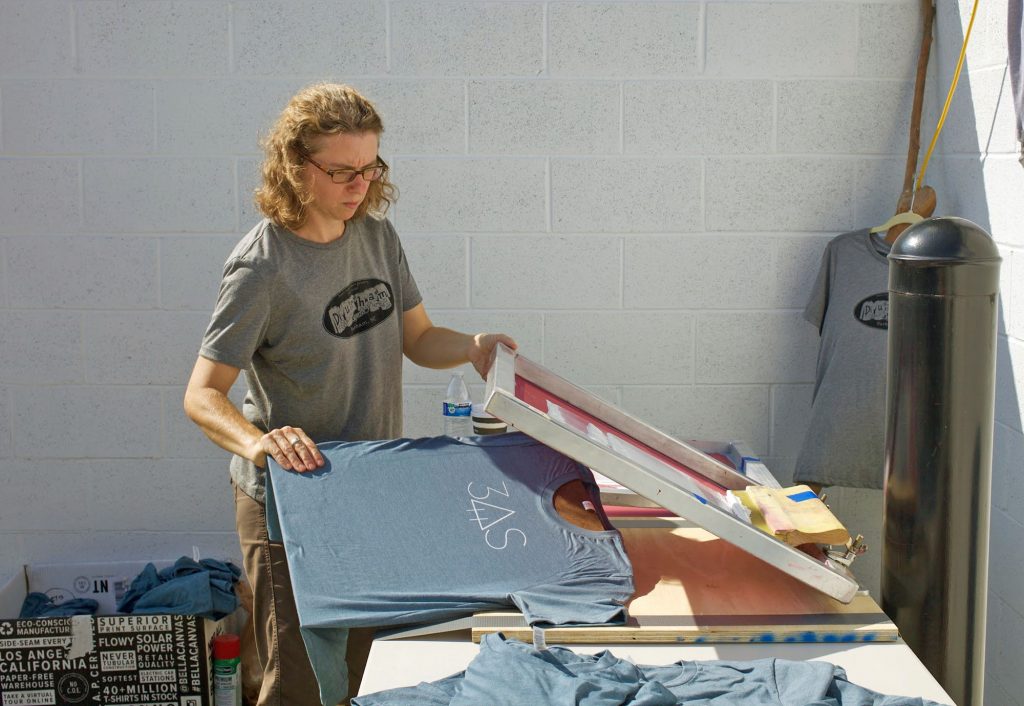 Jamie Wolcott, owner of Durham Short Run Shirts, was one of the vendors at the event. Durham Short Run Shirts is a small-batch printing company in Durham that caters to mostly bands, events, small businesses, and dance companies, including Courtney OM’s OM Grown Dance Company. Squeegee in hand, Wolcott screen-printed shirts throughout the day with a suggested minimum donation of $10. (Staff photo by Gabby Bulgarelli/UNC)

Kristen Spruill and Eddie Rubio were two of the vendors at the event, selling their paintings and jewelry. The pair’s collaborative work traces inspiration from nature, ceremony, and the journey within.

“We relocated to Durham because of the vibrant and strong community here. We heard about the fundraiser through a friend,” said Spruill, “and I think that this event is a testament to that.”

“We wanted to show support in any way we could,” Rubio added. 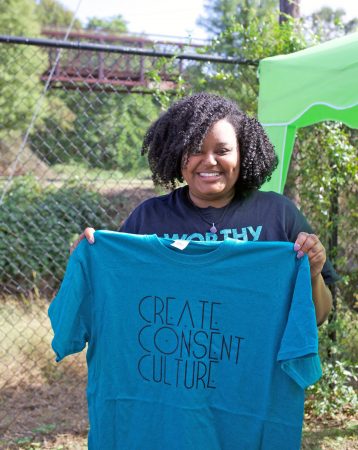 Barrow poses with a “create consent culture” t-shirt, one of their most popular designs. (Staff photo by Gabby Bulgarelli/UNC)

The organization functions as a support group and healing space for NCCU students who are overcoming traumatic sexual experiences, and strives to highlight the importance of aiding those in recovery from sexual assault, instead of simply teaching prevention.  Worthington and Barrow developed the messaging of their merchandise to remind everyone that they are worthy of both self love and love from others.

“Healing and rebuilding are long processes, whether it be from emotional trauma, environmental disaster or anything in between,” said Barrow. “Stereotypes need to be broken down. People need to be uplifted so that they can heal.”