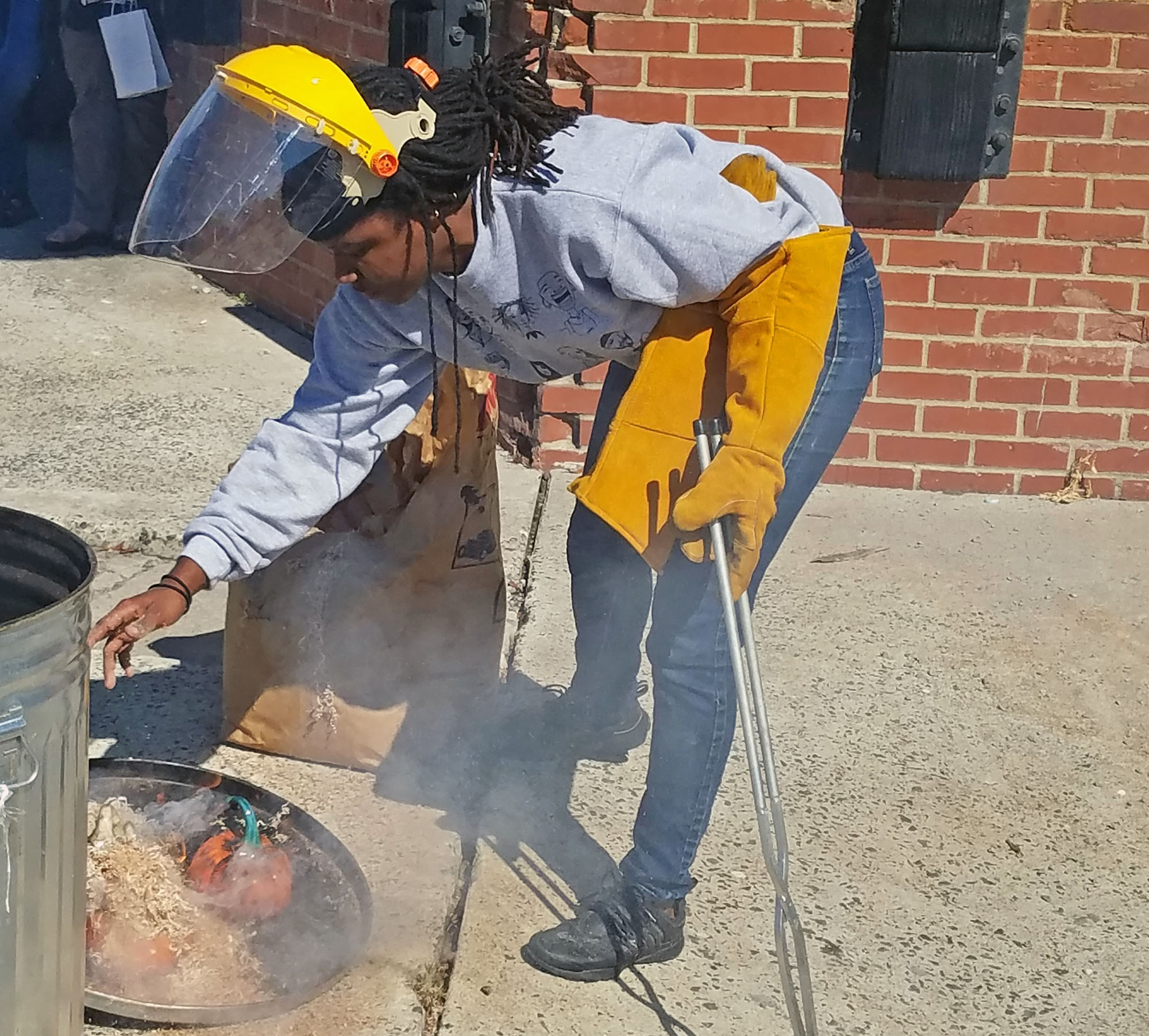 The furnaces were fired up, and beer flowed steadily Saturday for the Liberty Arts open studio tour and sale.

Liberty Arts has over a dozen artists working in its studio space on Pearl Street in Northeast Central Durham, working in a variety of mediums such as wood, metal, glass, printing, and textile media. The studio also offers classes taught by the residing artists, which can be found on their website.

The event was a success, drawing about 200 visitors. Executive Director Michelle Gonzales-Green estimated that more than $8,000 worth of art was sold.

Some of those sales came from the glass pumpkin patch which had more than 100 hand blown pumpkins made by Elijah Leed and Brad Miller.

“We’ve been making them pretty regularly since September,” said Miller, while Leed pulled a molten glass blob out of a furnace in front of a group of onlooking visitors.

Outside, Delores Hayes demonstrated the next step of the process of the pumpkin. Hayes, who has been at Liberty Arts since August, is a ceramicist who specializes in Raku, an ancient Japanese practice which gives pottery texture from smoke imprints left from burning organic material.

For this demonstration, Hayes was using sawdust to give the pumpkins a dabbled texture.

“I’m going to let these cool a little while then dump them in water, and they’ll be priced and put on the table for sale!” she said.

Zenzele Barnes is an intern for Liberty Arts, and describes what it is like working in such a creative environment.

“It’s thriving, there is so much more collaboration because there is so many new people coming together,” she said.

With works as big as a 13 foot metal statue, to a one inch earring, there is something for everybody at Liberty Arts.

Canadian artist Ben Sheeshy, an industrial designer who makes metal staircases and other architectural pieces has been at Liberty Arts for about a year, and has profited from working alongside a diverse group of artists.

“I started working with wood in many of my projects and asked Elijah to help me, and in return, I help him with welding,” said Sheeshy, who also occasionally helps with the welding class.

One way the artists come together with the community is the annual iron pour, which is happening Nov. 18. Over 3,500 pounds of molten iron will be poured at Liberty Arts foundry, and the event is open to the public.

“There is no other place where you can see this in public, because foundries are usually found in industrial locations,” said Aaron Earley. “It’s very dangerous.”

Many of the residing artists have been looking forward to the event for months, when they can finally fill the molds of the projects that they have been working on.

One of those artists is Tripp Jarvis.

“I was a member back in 2012, then I took a sabbatical then came back about a month ago to help,” he said.

Jarvis’s newest project is the iron heroes program, where veterans get to make a mold of their superheroes, or their personal heroes, and then cast them into solid iron.

“We’ve enrolled three veterans already and we help them find their inspiration in masks to uncover their true selves,” he said.

Members of the public can cast their own sculptures, too at the iron poor.

“We’ve got scratch blocks made of resin bonded sand — it’s surface you can scratch into which turns out as a tile.” Earley explained.

The molten metal will then be poured into the mold, creating a perfect negative of the design. Workshops for the tiles will be held at the George Watts Hill Pavilion at 538 Foster St. in Durham. The blocks will be sold for $30 while supplies last.

Since Liberty Arts move to the Northeast Central Durham neighborhood a year ago, Gonzales-Green hopes to get even more community member involved in the creative process, especially the poor and women of color.

“Diversity is an important part of the environment at Liberty Arts,” Barnes said, “especially here in Durham.”