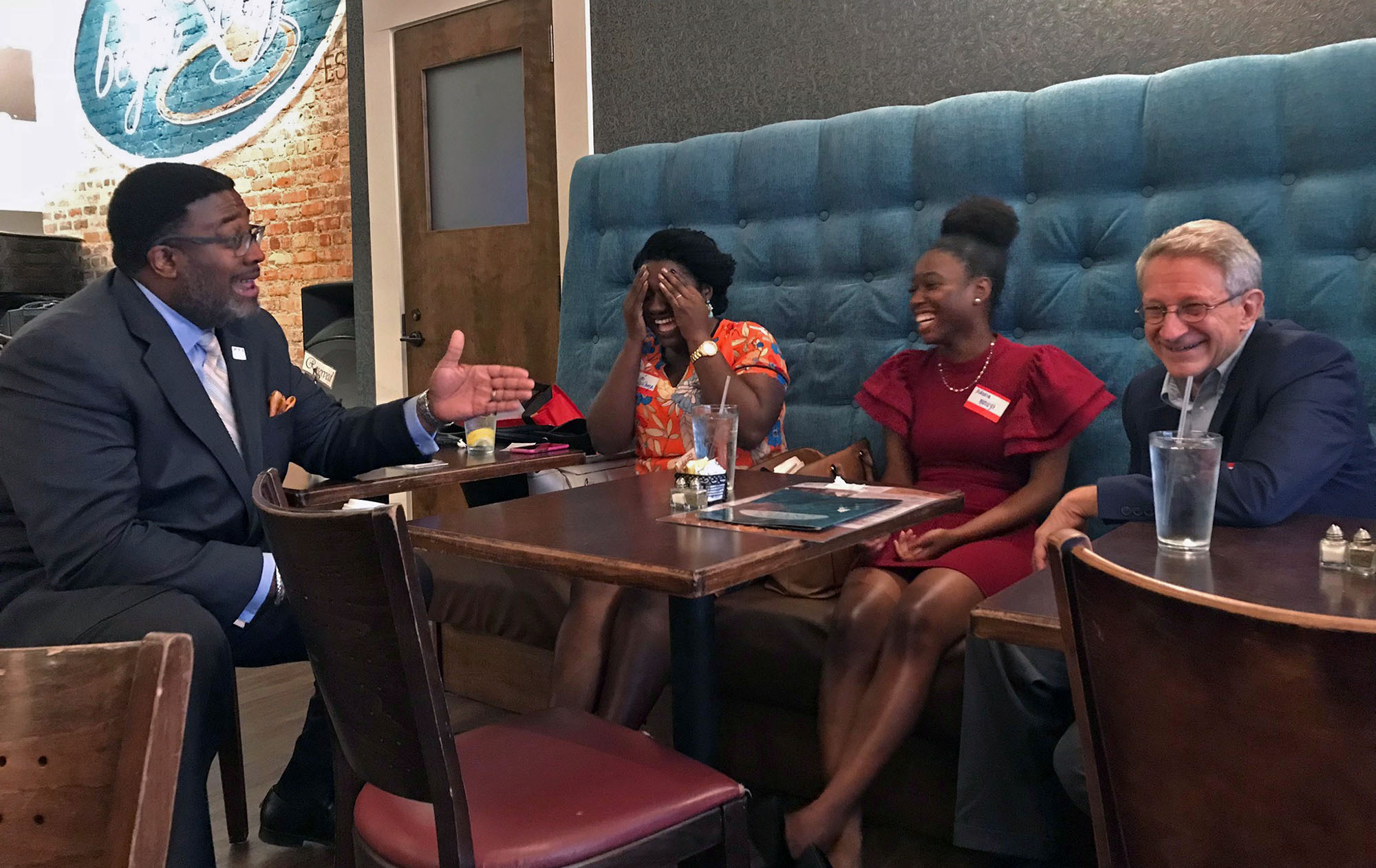 If you remember last year’s election at all, you probably associate politics with divisive attack ads and heated debates. But all negative preconceptions were put to rest last Thursday night at Beyú Caffé where mayoral candidates Steve Schewel and Farad Ali met in a moment of political civility to interact with young professionals from Durham.

The Candidate “Meet and Treat” was hosted by the African-American Caucus of Durham, and was organized in hopes of motivating young people in Durham to become more politically engaged. Sheena Matthews, the state and county membership chair of the caucus, said she first had the idea for the meeting during a roundtable discussion at the Legislative Black Caucus Foundation Scholarship Luncheon.

“We noticed that many of these people wanted to get involved, but some didn’t even know what precinct they lived in,” Matthews said. “I thought it was important for young people to start building relationships with the candidates, and once those relationships were formed, they could begin advocating for issues they care about.”

Matthews said the event was advertised specifically to young professionals, and organized as a way to encourage them to become more involved in the community.

“A young professional is someone who is young and motivated, or just getting started in their career,” she said. “With all that’s going on in their busy lives, civic engagement usually falls by the wayside.”

“I think tonight is really about getting the opportunity to network,” she said. “Lots of times people like me want to get involved in politics, but they rarely get a chance to see what things are like on the other side.”

Ali told the group that his appearance was not about campaigning, despite officially being one of two candidates left in Durham’s mayoral race. The general election is set for Nov. 7.

“I am not here to sell you guys on me, I’m here to tell you all to lead,” he said.  “I’m inspired to see the young legs, the hearts, and the energy you all have.”

Ali said that service is integral to any aspiring leader and encouraged the group to “be inspired. Transform the world. Go for it.”

Schewel then spoke to the group, saying “Here’s my message: ‘What Farad said,’” drawing laughs from the group.

He said his generation is leaving today’s young people with many important issues that must be dealt with.

The ‘Meet and Treat’ came at an interesting time for the candidates, as Durham’s primary election was held just the day before. Given the results, Schewel and Ali were the only ones in attendance that were actually still in the race. However, former Ward Two City Council candidates Dolly Reaves and LeVon Barnes, as well as former mayoral candidate Shea Ramirez all came to interact with young people as well.

Reaves, 27, is a mother of three and said she truly knows the perils of poverty, as she was homeless at one point in her life.

“I started out with nothing,” she said. “But going through the system, I saw all the red tape that the impoverished have to cut through in order to have a chance.”

Reaves, received just 2.1 percent of the vote, but said she ran for Durham City Council because she believes government officials need to truly understand the people they represent.

“For a government to represent the people, you need someone who can say ‘I’ve been there. I know what that’s like,’” she said.

Now that her candidacy is over, Reaves said she plans to continue battling for more affordable housing and to advocate for women’s rights and safety through her involvement with the League of Women Voters.

“I hate losing. I’m still trying to figure out my feelings,” he said.

Barnes, 34, received 10.2 percent of the vote. But despite losing he said he will remain true to his platform, which advocated for widespread job training, and hold those in office accountable.

“I’m not done as far as my political campaigning,” Barnes said. “I’ll be even more engaged and more active next time.”

Shea Ramirez, one of the five mayoral candidates now out of the race, said she had an amazing time during her first run for office. Ramirez received just 1.1 percent of the votes.

“It was interesting. It just wasn’t my time,” she said. “People know me now, and I’m just going to keep doing what I’m doing in the community.”

The race for mayor is now narrowed to just two candidates, but Ali, who received 29.1 percent of the vote total, said his mentality will remain the same.

“We will keep getting the information out there to voters, and we’ll keep focusing on building one Durham,” he said.

Ali said his message of ‘one Durham’ is about bringing together spheres of Durham that are “excellent, but still independent of each other.” These spheres, Ali said, include Duke University, the county government and community organizers.

“We need to understand that everything we do affects each part of the community,” he said. “My competitive advantage is that I’m already engaged with so many of these areas.”

Schewel said he was feeling optimistic after the primary election. His reaction is understandable, as he gained 51.2 percent of the vote, putting him 22 points ahead of Ali.

“My vote total was strong, and better than I expected to be honest,” he said.

Schewel said his top priority was to make the City of Durham a city for all.

“We need to be making sure we’re providing affordable housing,” he said. “And we need to provide good jobs with good wages, and make sure our transportation system is equipped to get people to those good jobs.But it’s hard. If it was easy, it would’ve already happened.”

“These are young people,” he added. “Who are involved and seeing their engagement is inspiring.”

Schewel said the event was a much-welcomed break from the strenuous campaign trail.

As the event concluded, Matthews gave her thanks to the candidates. “The time you dedicated to your campaigns, and the time you gave us here tonight just shows what great leaders we had, and still have, in the race.”