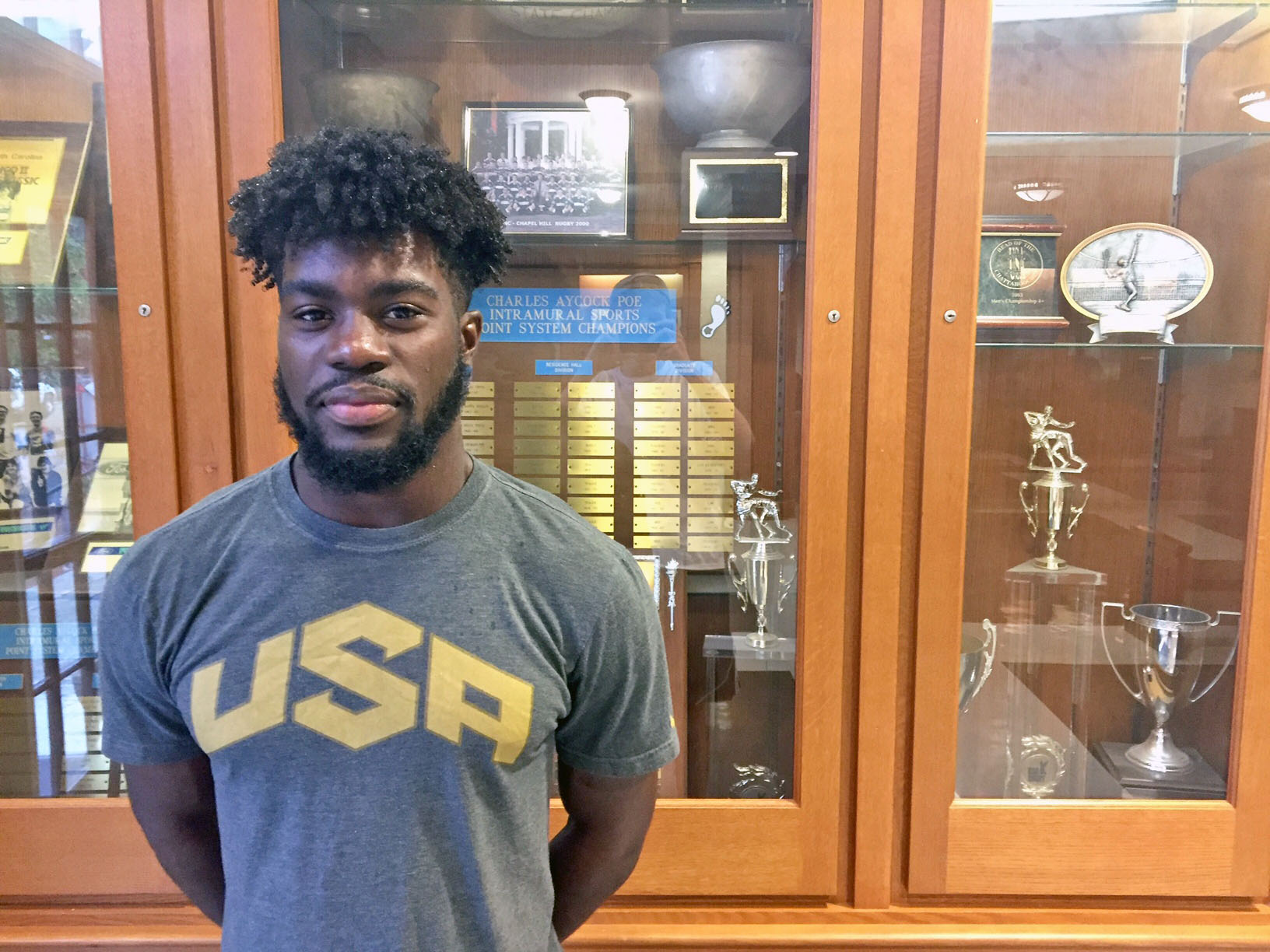 Track practice ended an hour ago. His last class was dismissed three hours ago. But his ride was running late.

When his older brother, Aaron, was in high school with him, the time wouldn’t crawl by as slowly. The two of them would run through the halls. Hurl playful roasts at each other. Record random, funny videos of themselves and post them to Facebook.

In college, the Krah brothers would go on to play different sports at different universities. Marcus is a redshirt first-year on the UNC track and field team. Aaron is one year removed from playing football at Appalachian State.

But back then, the brothers waited together. That is, until the youngest Krah brother — who happened to be one of the best track and field athletes in North Carolina at the time — was the family’s last Hillside Hornet. His mother, who owned a cleaning company with her husband, logged long work days to provide for her four children. On days where she was really late, she’d bring Marcus food from Wendy’s.

“It was a norm,” Marcus said. “It always happened, so we didn’t get upset about it.”

The Krah parents didn’t check out their children from school early to take them to the beach like they used to when they were younger. They didn’t frequently go to many track meets or football games or soccer matches anymore, either. But that was okay — the Krah kids understood.

“There were some things, since my parents worked a lot, that they weren’t able to teach me,” Krah said. “But the things they did miss out on, my brothers and sister showed me what to do and whatnot. I really got my drive and self-motivation from them.”

Aaron stood in for Mom and Dad, teaching Krah some of the things his parents could have, but didn’t. He taught his younger brother how to hold and shoot a gun, for example.

Among other things, Aaron demonstrated that he didn’t need to go to the biggest party in his neighborhood to be accepted, and he’d always be available to talk to Krah the night before a big race if he ever needed guidance.

He hadn’t received a scholarship offer from any school yet. Old, current and potential future coaches were in the stands. His parents were in the crowd, and so was his oldest brother.

Then a senior in high school, Krah said he had felt out of his element all day. And after a panicked triple-jump showing, he frustratingly lifted his hands near his face and started talking to himself.

“What is going on?” he recalls saying under his breath.

Aaron walked onto the track and told his younger brother that he shouldn’t feel any pressure from anybody. Sure, the goal was to win a State Championship his senior season so his mother wouldn’t have to pay for a Hillside class ring, but Krah had loved competing ever since, at 13, he won three medals at a national meet.

This was supposed to be fun.

Krah said his brother added: “Everything comes in time.”

Those words drove the track runner then — directing him to a solid second-place showing on that particular day — and they continue to affect him today.

Krah applied his brother’s talk when he broke national records during his senior year’s State Championship meet — the same event where he came home with three personal best times, three first-place finishes and a team 4A State Championship that headlined one of the best days of his life. He used it when he didn’t get a call back from Virginia Tech, and when he only was initially offered a partial scholarship from UNC-Chapel Hill before getting offered a full one from UNC after the conclusion of his senior season.

And today, he uses his brother’s words in his training.

James Tatter, a writer for an online running publication named MileSplit, said Marcus is expected to do big things during his tenure as a Tar Heel.

“Him just coming to UNC was a cool thing just because North Carolina’s track program hasn’t been at the top of the nation ever really,” Tatter said. “And he obviously saw something in the school that made him want to come here and grind it out and do something special.”

As a redshirt first-year who hasn’t seen any collegiate competition since arriving in Chapel Hill, Marcus is hanging on to the lessons that his older brother instilled in him years ago.

After all, it’s gotten him this far.

Alex Zietlow is a journalism student at the University of North Carolina-Chapel Hill School of Media and Journalism. A native of Raleigh, this fall he is serving as sports editor of the VOICE.