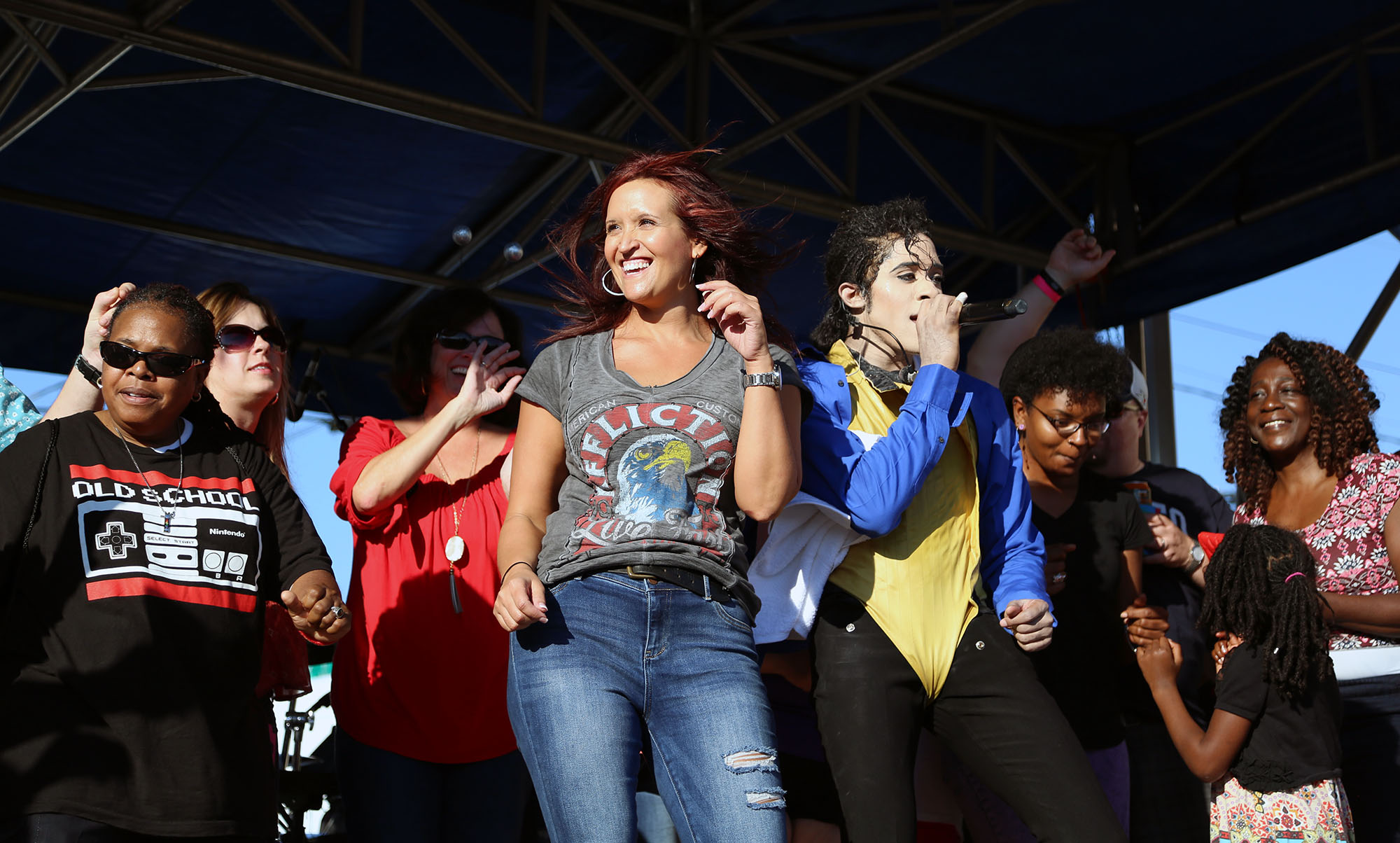 Jami Lee, along with many other people, was invited on the stage to sing together with the band Who's Bad. (Staff photo by Yizhou Jiang)

On a clear and sunny Saturday afternoon, many Durham locals chose to join the second anniversary celebration of the LGBTQ Center of Durham.

The event was held on the Rigsbee Avenue between Geer Street and Corporation Street in the form of a family-friendly block party free to the community.

The LGBTQ Center of Durham, along with several other organizations such as iNSIDEoUT, a youth-founded and youth-led group, set up temporary stalls inside the party for people to interact. 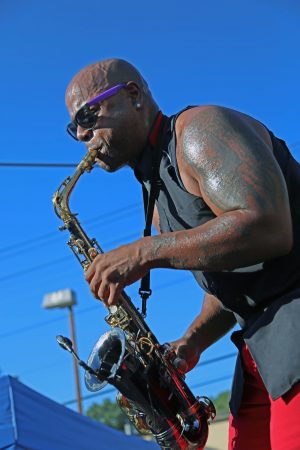 “There was a broad recognition that the LGBTQ community for as strong as it appears in numbers was lacking a hub, a physical space for folks to find others, and a place from which to organize efforts to fill the gaps in services.” said Helena Cragg, the board chair and executive director at the Center.

A native of New York City, Helena Cragg earned her B.S. degree in Computer Science from M.I.T. in Cambridge, MA, as well as an MBA degree from M.I.T.’s Sloan School of Management. She has been actively involved in communities, such as helping to restore historic home since moving to Durham in 2003.

Cragg is also currently serving as the co-president of the Old North Durham Neighborhood Association.

The sponsors and partners of the event, Bell’s Brewery and Motorco Music Hall, were bringing out their best to pour energy into the party.

The fresh scent of Bell’s specialty beer Sparkleberry, first brewed for Kalamazoo Pride in 2013 and featured as the official queer beer for the celebration, filled the air with even more joy and sweetness.

“From my eyes the event appeared to be a success,” said Cragg, “I saw a lot of happy faces, folks had an opportunity to interact with our community partners and our sponsors, and it was a beautiful day with amazing music.”

Speaking of great music, it was the live performance of the band Who’s Bad that ignited the whole crowd.

As the longest-running Michael Jackson tribute band, Who’s Bad has rocked the stage for the last 13 years. They have been toured around the world, embodying the true king of pop music Michael Jackson’s mission to bring people together of all races, genders, and cultures through music. 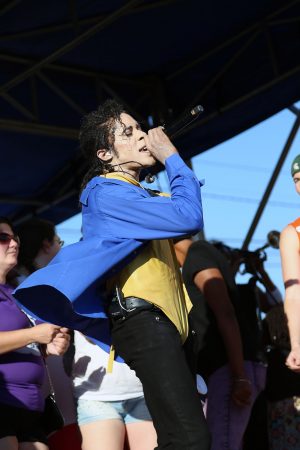 “The music of Michael Jackson is so universally beloved that we knew it would be the perfect music to bring together Durhamites from every walk of life.” Cragg said about the reason why the Center invited the band.

The band performed more than 10 of Michael Jackson’s top hits. Members set the stage on fire with enthusiastic vocals and bold dance moves, keeping the crowd screaming at the top of their lungs.

During the performance, many people from the audience were even invited on stage to sing along with the band. The heat did not cool down even when dusk fell.

“I really enjoyed today; I loved the energy from the crowd,” said James Times III, the front man of the band. “It was my first time to perform on this kind of event, and I’d love to do more in the future. It was for good cause.”

Times also said that it was just love, the simple one-word message that his band hoped to convey to the audience through their stage.

Cragg said about the plan of the Center, “We hope to be a place that encourages and supports people to proudly be exactly who they are.” 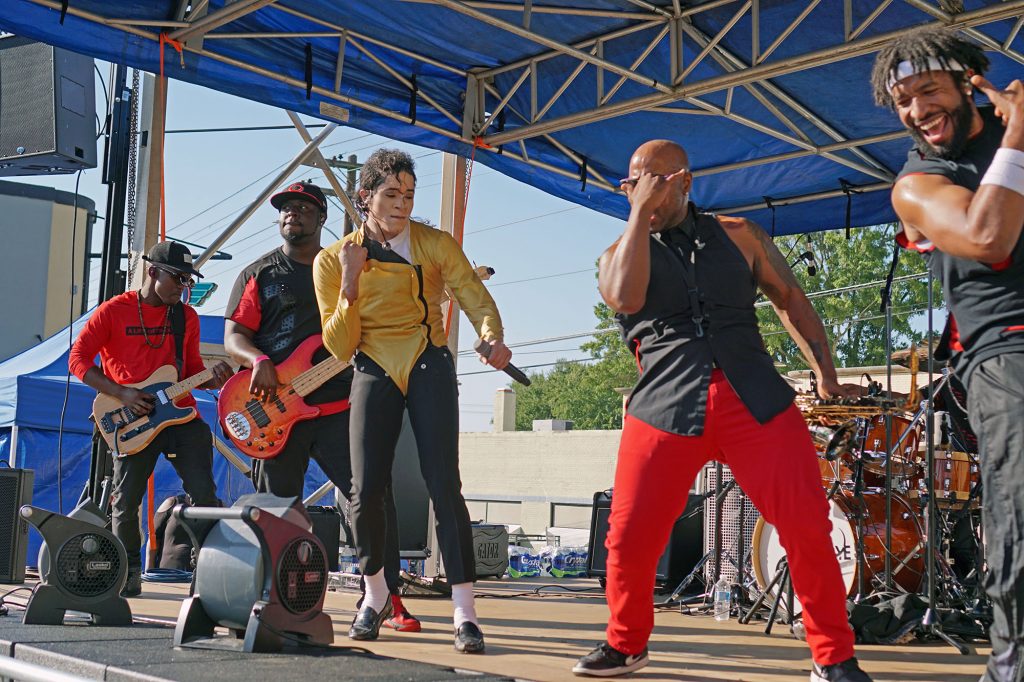 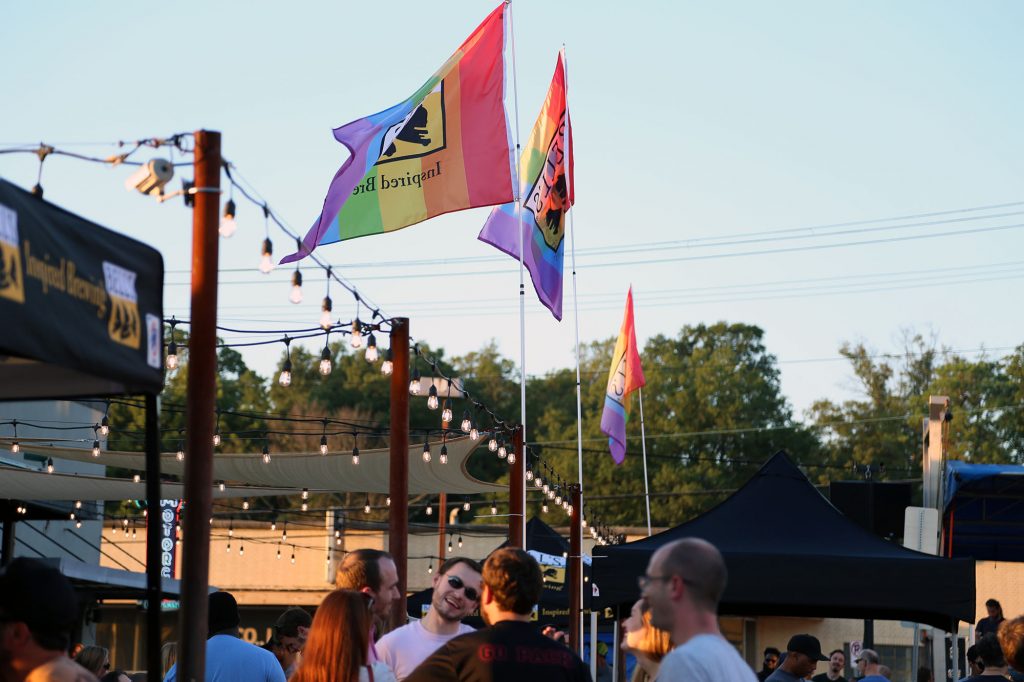 The crowd is enjoying the event with Bell’s Brewery which is featured as the official queer beer for the celebration. (Staff photo by Yizhou Jiang)

Yizhou Jiang is a journalism student at the UNC-CH School of Media and Journalism. A native of China, this fall she is serving as a photographer-writer for the VOICE.