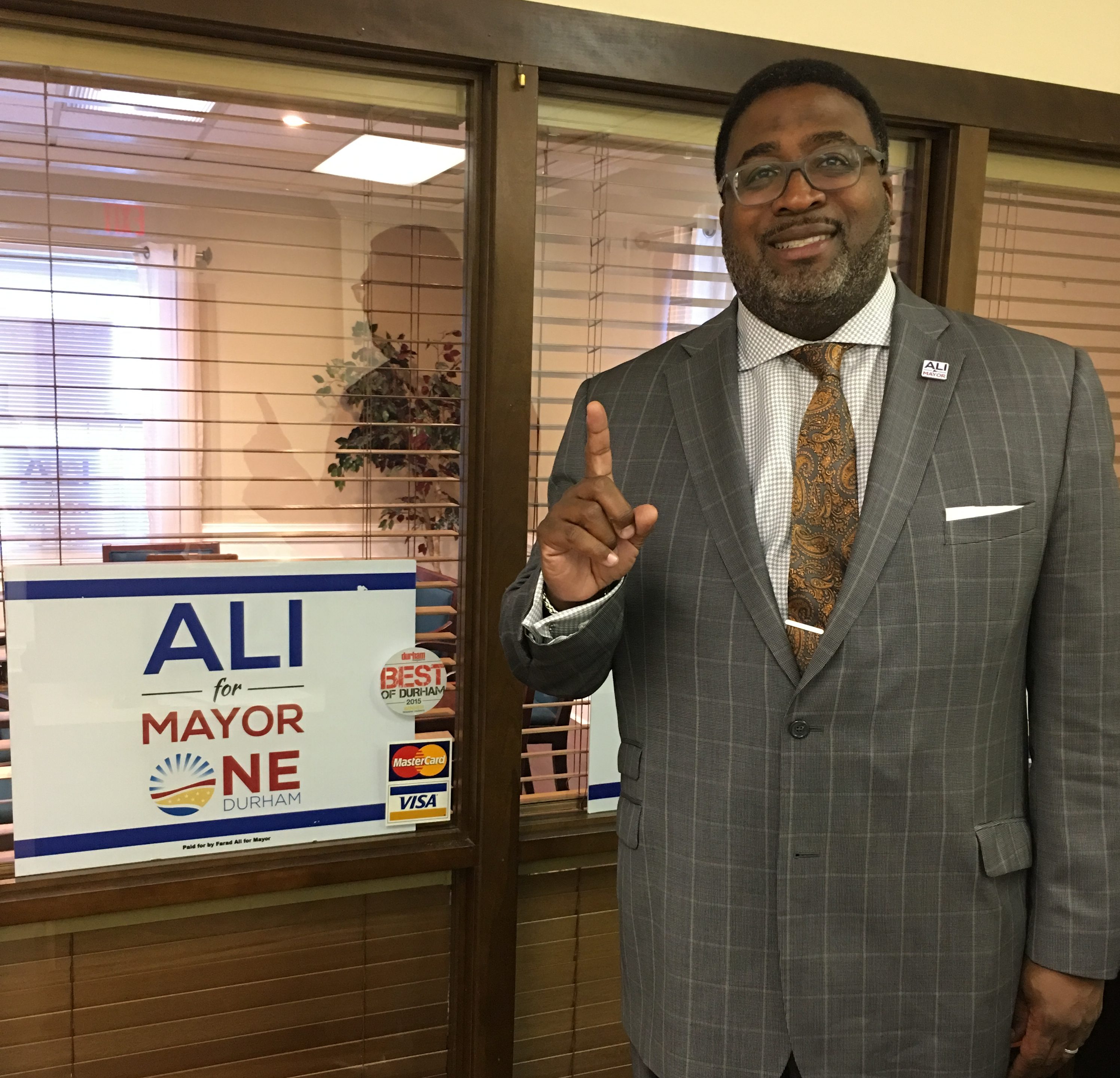 Farad Ali posing next to his “Ali for Mayor” sign. (Staff photo by Julian Keeler).

Farad Ali has become a well-known figure in the Durham community because of his professional work, service, and commitment.

Now, after nearly 30 years of involvement in the city, Ali has his sights on being the city’s next mayor. Ali, along with his supporters, believe with his leadership and experience, Durham could shift in a better direction for all.

Ali was born in Brooklyn, New York where he spent the first decade of his life surrounded by extended family. His immediate family moved to Durham when he was 10. The move gave Ali a fresh start in a new place.

“We didn’t have family when we moved down here,” Ali said. “We created a new family through our religious community, school, and sports.”

Ali loved sports. He was a standout athlete a Jordan High School where he played basketball, football, and ran track. He also went on to play JV basketball at UNC Chapel Hill. 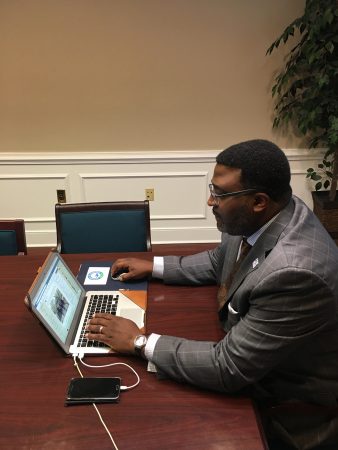 Farad Ali at work in his office. (Staff photo by Julian Keeler)

Although Ali was a solid athlete, he understood that he had an academic gift in the math and science fields. He was an equally standout student, which led him to get involved with different scholastic programs. These programs allowed him opportunities to intern in banking, where he was later offered a job.

After working as a banker for numerous years, Ali worked for The Institute of Minority Economic Development. A nonprofit that focuses on build up women- and minority-owned businesses, historically underutilized communities, and diversity in corporations. Ali currently serves as the President and Chief Executive Officer for the organization.

Ali maintains a busy schedule between running for mayor, working with The Institute of Minority Economic Development, and being a family man. He is married with four children who, like their father, have busy schedules.

“People who are busy are disciplined,” Ali said. “My most important part of my life is praising God, the second part is being a father and a husband, and third is everything else. Whatever I have time to do, including service at work and of the city, just falls into place.”

Ali loves Durham and wants to see the city prosper. He feels his experience in economic development and affordable housing in the community gives him a hands-on approach to reach citizens.

“I want to build the community, build economic development, and build the people,” Ali said. “My experience in being active in the Durham community can engage everyone to come together. I bring a unique perspective on how we should unite for people to have shared prosperity.”

Julian Keeler of Raleigh is a junior journalism major at NCCU. This fall he is serving as a staff writer-photographer for the Durham VOICE