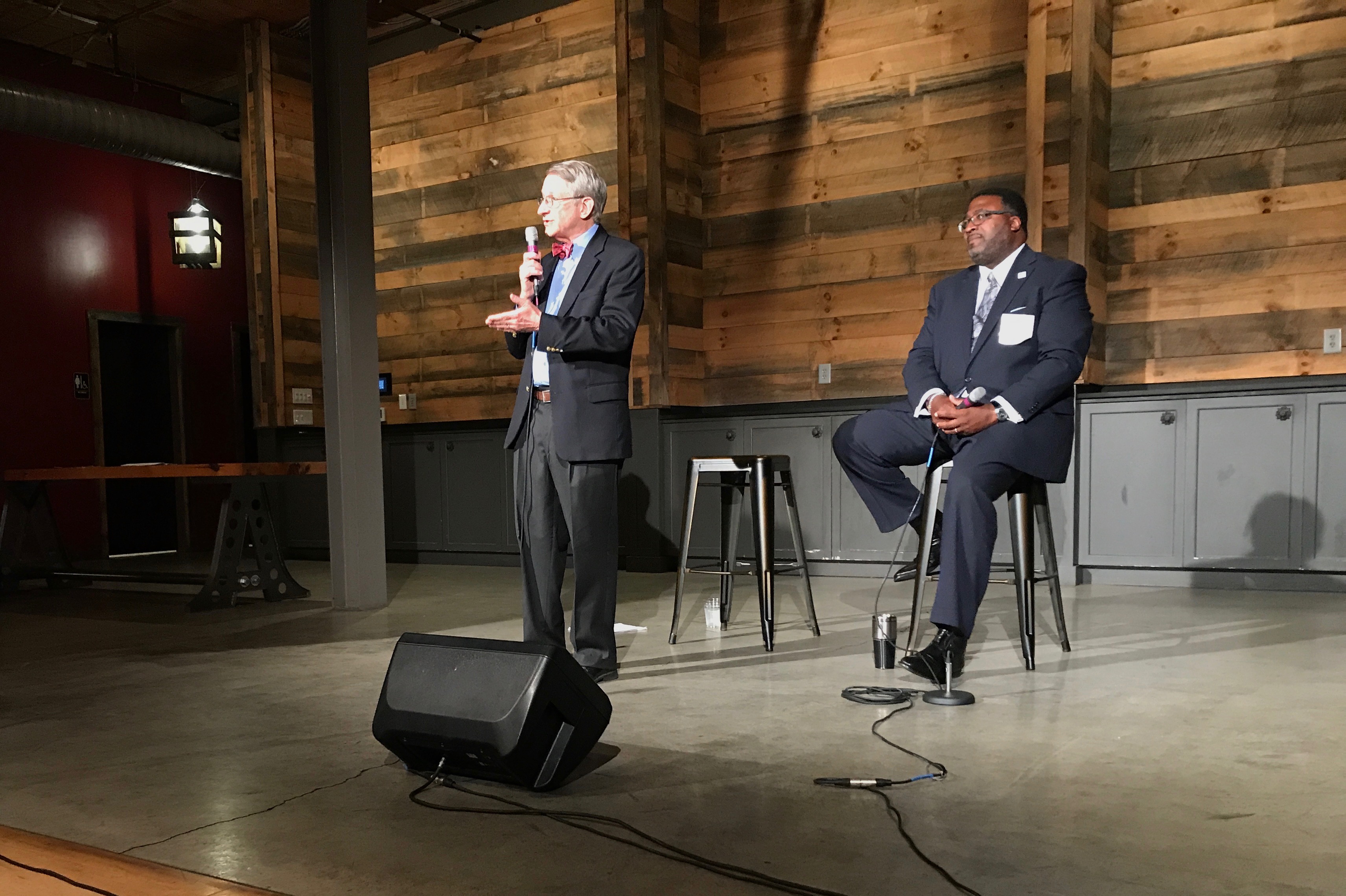 Maybe game seven of the World Series drew the crowd away, or maybe Durham residents are just simply experiencing election fatigue. Either way, attendance was lower than expected last Wednesday for the final forum discussion of the mayoral race.

With less than a week to Election Day, candidates Farad Ali and Steve Schewel participated in their 25th forum discussion of their campaigns. The MayorUP! Forum took place at the Rickhouse, at 609 Foster Dr., and was hosted by Clarion Content, a local media outlet.

In his opening statement, Schewel said Durham must answer one question.

Schewel said, if elected, he will focus on three prominent issues to promote inclusion. The first is to ensure all of Durham shares in the city’s newfound prosperity. The second is reflecting progressive values to the state and nation, and the final is maintaining and enhancing Durham’s quality of life alongside its economic growth.

Ali said some issues in the city cause the metaphoric seesaw to tilt toward benefiting one group above others. Ali named economic development, poverty, job creation and wealth as specific “seesaw” issues.

“I see these issues and I think that’s an opportunity for us,” he said. “No opportunity comes without obstacles, and obstacles can’t be overcome without a plan.”

“We need to understand that we can build buildings, but we can also build communities and help people be better off,” said Ali.

Talk of economic development continued throughout the night, but after the event Durham resident Louise Morris said she was hesitant to welcome any and all companies.

“As someone who lives in downtown, I’m really concerned about it growing too fast,” she said. “Large corporations would change the nature of the Durham I love.”

Morris has yet to vote, but said she planned to cast her ballot for Schewel on Tuesday.

After last month’s primary election, Schewel came away with 51 percent of the votes, giving him a considerable lead over Ali, who carried 29 percent. However, factors have recently changed. In a news conference Oct. 19, Mayor Bill Bell endorsed Ali. A story in the Duke Chronicle quoted Mayor Bell saying, “by electing Farad we would be assured that at least four persons on the City Council will have had at least some form of City Council leadership.”

Wednesday’s event was aptly named. The candidates certainly discussed more than debated and their answers rarely, if ever, conflicted.

The moderator, Aaron Mandel, of Clarion Content, noted the political similarity of the two in an interview.

This ‘different parts of Durham’ idea could easily be read as one concerning race, however both Ali and Schewel rejected this sentiment in their answers to the evening’s first question.

Mandel asked the candidates, “If someone came to you and said this election is now a black versus white election, what would you say to that person?”

Ali spoke first, saying “There are some difference between Steve and I, but if you make it just about our skin color, I think you become limited in your ability to see these for just what they are.”

Ali did note that race is an important factor to consider when discussing policy, however.

“I don’t run from the fact people of color are probably the most affected by the lack of inclusion, or economic development, or from poverty. That’s not a secret,” he said. “But I think God made us come from different tribes so that we can identify with one another.”

Ali said a cooperative effort is needed to promote inclusion within the City of Durham.

“Diversity is already here,” he said. “But inclusion means we work together to make things happen for everyone.”

Schewel then spoke, saying Durham is a special place because it is a city without a racial majority. He also said a racial divide is avoided by this lack of a majority.

“To get elected, we both have to get votes, and a lot of votes, from people who are not of our race,” he said. “I think that really helps Durham in a lot of ways.”

By power-sharing, Schewel is referring to the diversity within Durham’s city government. Both Durham’s City Council and School Board are consisted of a majority of African-Americans. Schewel did acknowledge that Durham needs to do better job of including the Latino population within this shared power.

The candidates received questions that ran the gamut from bicycle safety, to achievement gaps in education to encouraging civic engagement among Durham’s citizens. For a more in-depth look about Ali and Schewel’s platforms, readers can follow this link.

Former mayoral candidate Pierce Freelon was also in attendance at Wednesday’s forum. Unlike Bell, Freelon has not endorsed Ali or Schewel.

Freelon said the candidates’ answers regarding poverty has solidified his decision not to endorse.

“Poverty is a policy choice,” he said. “We need policy-makers able to address that head on and willing to dedicate political capital toward that issue.”

Freelon’s endorsement could be significant, as he earned 16 percent of votes in last month’s primary.

In his closing statement, Ali put forth an interesting argument.

“I want to be sure that we understand that this is great opportunity to elect to great people to city council,” he said.

A victory for Ali would mean Schewel remained in his City Council seat, rather than moving to the mayor’s office. Ali described a team effort between he and Schewel if he were to win the mayorship.

Schewel’s closing remarks detailed his idea of what the job of the next mayor will actually be.

“The mayor has very little formal power in Durham,” he said. “The job of the mayor is to bring people across differences to meet our common challenges.”