Qualia Holder-Cozart signals the end of a vocal warm-up during a practice for the Vivaldi choir. Kidznotes separates students into four groups—Mozarts, Haydns, Coplands and Vivaldis—based on age and skill level. (Staff photo by Allison Tate)

Over the years, the VOICE has told the stories of Kidznotes’ students and events. But, in looking back, there’s some stories that we haven’t shared yet.

Since its start in 2010, Kidznotes has boasted influential and talented instructors and volunteers who have had a desire to make a difference through music.

With that in mind, the VOICE sat down with two instructors who are new to the program and one volunteer who has been making an impact in students’ lives for years.

How long she’s been with Kidznotes: She’s served as a Kidznotes choir conductor since this August, but has volunteered since summer 2016.

Where she’s from: Southwest Durham

How she got here: Holder-Cozart got her start singing around the house as a child. She remembers writing a song when she was eight years-old and having her parents give it a listen. From there, her parents realized their daughter’s musical talent and encouraged her to pursue it.

After meeting Kidznotes’ Rashad Hayward during a performance at the DPAC two years ago and crossing paths again at NCCU, Holder-Cozart developed an interest in the program, leading her to volunteer for two summers and apply for the job this year.

Planning the dream: She’s applied to transfer from NCCU to an online program provided through her dream school, the Berklee College of Music in Boston (Correction: an earlier version of this story incorrectly listed her choice as the University of California-Berkeley College of Music. The VOICE regrets the error)  where she’ll complete her undergraduate degree and consider pursuing a master’s.

Lessons learned: Holder-Cozart said that her students have taught her about patience and being honest with herself and others. They also serve as a reminder on how to live her life and pursue her goals.

“Being with them and seeing how carefree they are and just how genuine they are towards what they’re doing means a lot.” 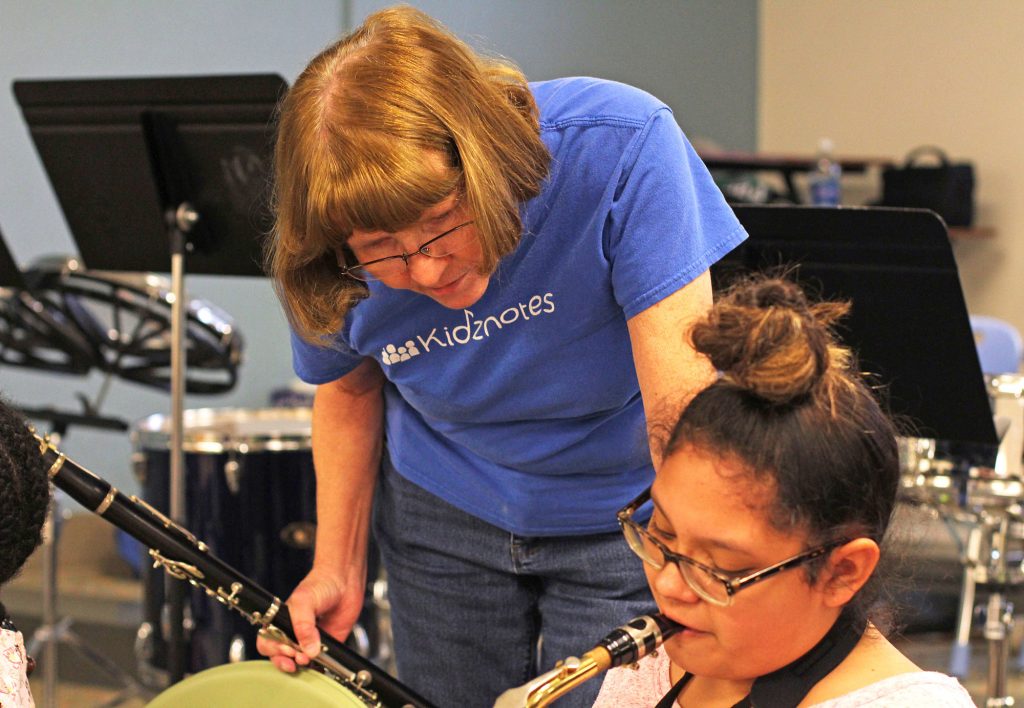 Louis Eaglesfield assists a saxophone player during a break between the orchestra’s practice sessions. During practice, Eaglesfield plays clarinet alongside the woodwinds musicians she mentors. (Staff photo by Allison Tate)

How long she’s been with Kidznotes: She’s been volunteering with woodwinds musicians in the orchestra for around four years.

Where she’s from: Originally from New York, Eaglesfield lived in Indiana before moving to Raleigh.

How she got here: Eaglesfield first began to play the clarinet in fourth grade while growing up in New York. She followed her passion for music to the Indiana University School of Music where she received a degree in music education.

While looking through a booklet of volunteer opportunities, Eaglesfield came across Kidznotes. As a clarinet player, she wanted to join an orchestra or band and, at that time, the Durham Kidznotes location was the only location with an orchestra.

The best part of volunteering: “I like helping the kids. I like seeing their expressions when they have mastered something–when they improve and they master something–because I feel that music really improves their attention span and their ability to focus and to stick with something.” 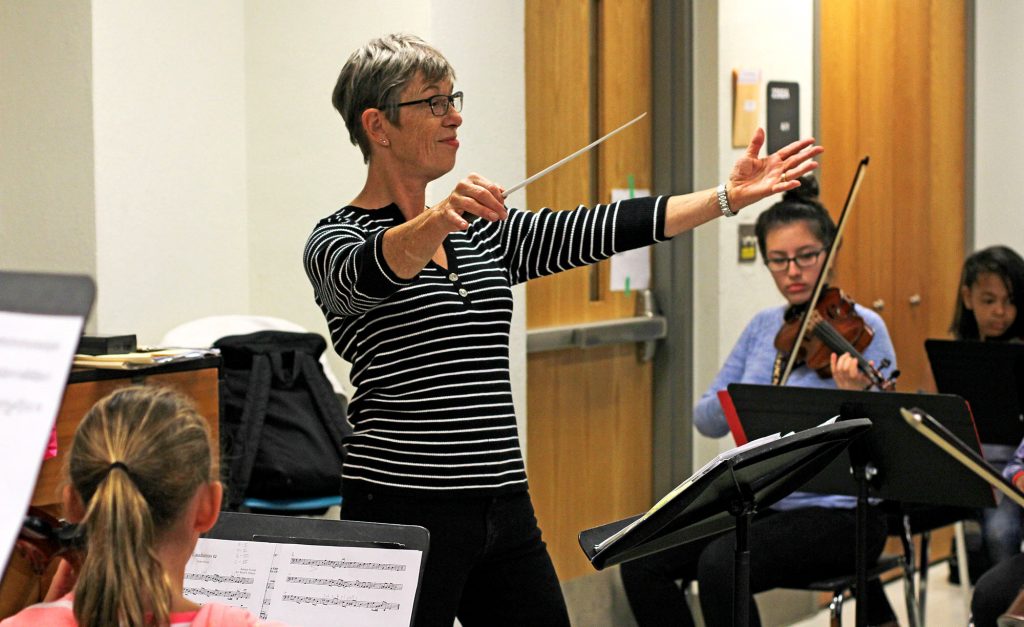 Rebecca Rogers leads the Vivaldi orchestra through a selection from Vivaldi’s “Gloria”. The orchestra is preparing for their winter concert on Saturday, Dec. 16 at the Holton Center Auditorium. (Staff photo by Allison Tate)

How long she’s been with Kidznotes: Rogers first joined Kidznotes this summer as orchestra conductor during the program’s three-week day camp.

Where she’s from: Originally from Baltimore, she now lives in Pittsboro.

How she got here: Rogers’ musical career began in an elementary school band program in Maryland, later attending the Peabody Preparatory music program. She studied music, biology and psychology at Swarthmore College in Pennsylvania. After graduating, she followed her education to Paris and New York City before spending the majority of her professional life teaching music around Boston and Hanover, New Hampshire.

After years of teaching full-time, Rogers made a career change, entering into research regulatory work while keeping her passion for music. Nearly three years ago, a job in the Research Triangle brought her to North Carolina. This March, she returned to teaching music and discovered Kidznotes.

Sharing and self-discipline: Rogers is passionate about sharing what she knows and helping her students learn self-discipline that they’ll use for the rest of their lives.

She also enjoys seeing students of different ages coming together to make music.

“I’ve loved bringing people together, people of different ages, and sharing music. I think music and music education are so critical, because I think each of us needs to find things that are outlets and that give us pleasure.”

Connecting to the community: In addition to connecting with her students, Rogers said she likes how being at Kidznotes has connected her to families and her new community.

“It’s really made me feel much more like I belong in North Carolina.”