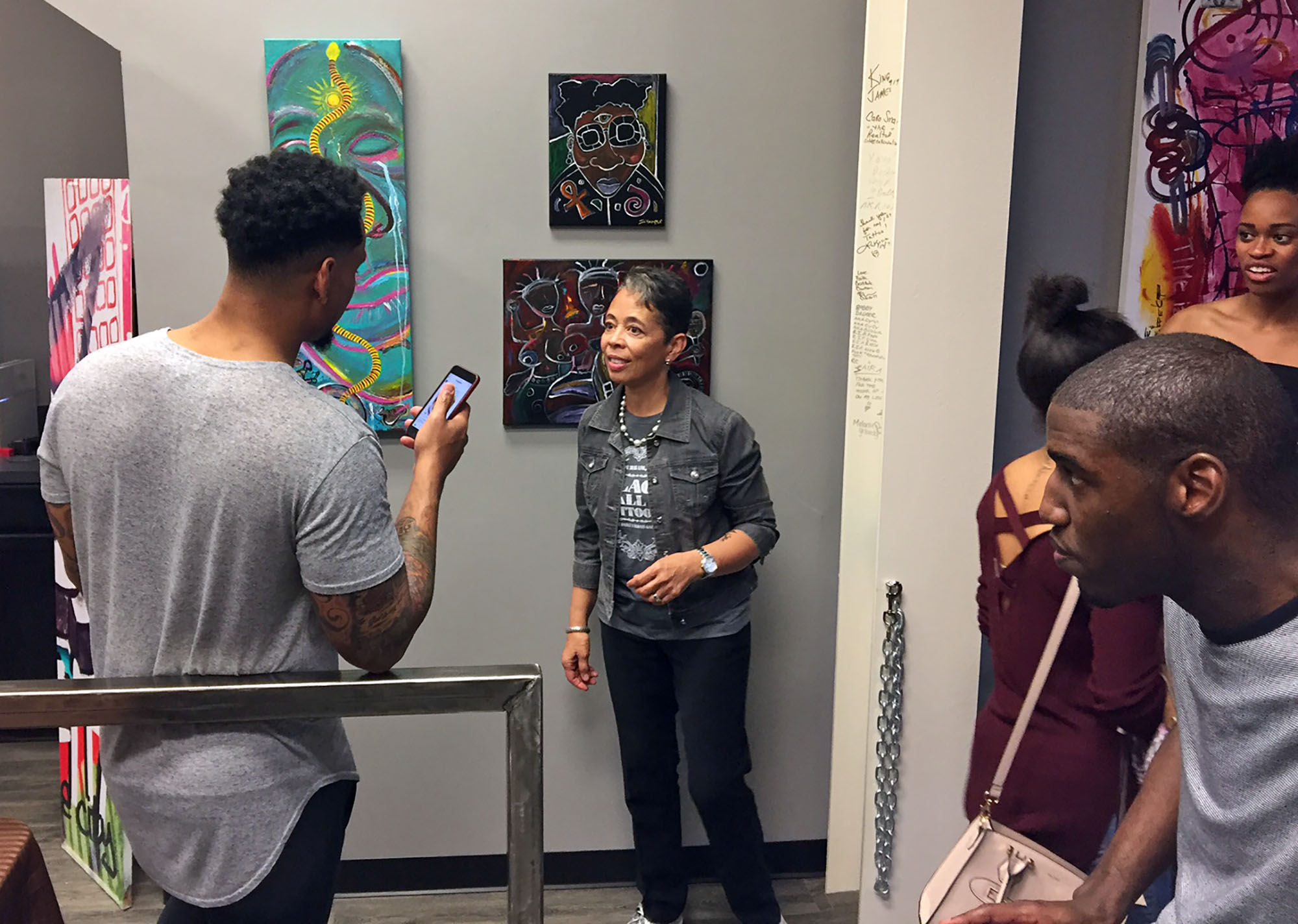 Customers converse at the “5th on the 5th” event — the open house that occurred on Sunday. (Staff photo by Alex Zietlow)

Just like the skin of the store’s customers, the walls inside 5th Fare — one of Durham’s newest urban galleries and tattoo parlors — are dressed up with artwork.

There’s an outlined sketch of a bull with city landmarks filling the animal’s body. There are drawings of sheet music with abstract, unidentified monsters in the foreground.

While the business that the tattooing studio brings in “keeps the lights on” at 5th Fare, Brandon Palmer, the owner of store on North Mangum Street, envisions his shop as a judgement-free zone where local artists can satiate their creative desires. 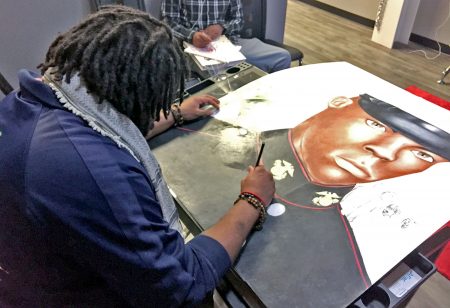 Talley Jr. — whose artistic alias is Bobby Danger — touches up a piece he is currently creating. (Staff photo by Alex Zietlow)

“If people want a different, relaxed creative environment, then maybe they’ll come here,” Palmer said. “That’s the idea, to have that space in Durham.”

Palmer, a tattoo artist by trade, said that the idea of his shop serving as a creative space is centered around the idea that people who want to decorate their bodies with tattoos inherently believe that artwork has financial value.

“If you’re an artist, hopefully it gets to a point where, you say, ‘I want to have a piece in there,’” Palmer said.

On Sunday, 5th Fare hosted an open house to showcase its arrival to the Durham community. Palmer said the store has been functional since February, but it just put up the signage to signal to the outside passerby that it is a legitimate store.

As of right now, 5th Fare’s primary customers are friends and family of coworkers.

Diana Ciompi, a henna tattoo artist at 5th Fare, said that the event on Sunday was meant to prove that you don’t have to be a friend of a friend to be a customer of the store.

“You know the vibe you get when you walk into a tattoo shop,” Ciompi said. “Like, sometimes, it can be like you’re not a part of this very specific group of people. It’s not that they’re trying to make you feel unwelcome or feel kind of out of place, it just doesn’t feel like the most inviting environment. We’re trying to put a different spin to the typical tattoo shop.”

Palmer, Ciompi and Robert Talley Jr., the store’s graphic designer who also indulges in visual art practices, are all Durham natives. In fact, the three of them attended Riverside High School and, at different points, had the same high school art teacher.

“We had Ms. Griffin man,” Talley Jr. said. “She was hard-core. Like when you’re in there, it’s like she’s just putting the hammer down on you all the time. She demands perfection. That’s kind of what fuels me when I draw now.”

Talley doesn’t have any of his drawings or paintings on the walls of the store yet. As of now, he’s been developing logos, business cards and making other critical design decisions for 5th Fare.

From the background of its employees to the paintings on its walls, 5th Fare is all about providing a space where artists and creative minds can convene.

And it has now officially arrived as part of the Durham community.

Alex Zietlow is a journalism student at the University of North Carolina-Chapel Hill School of Media and Journalism. A native of Raleigh, this fall he is serving as sports editor of the VOICE.