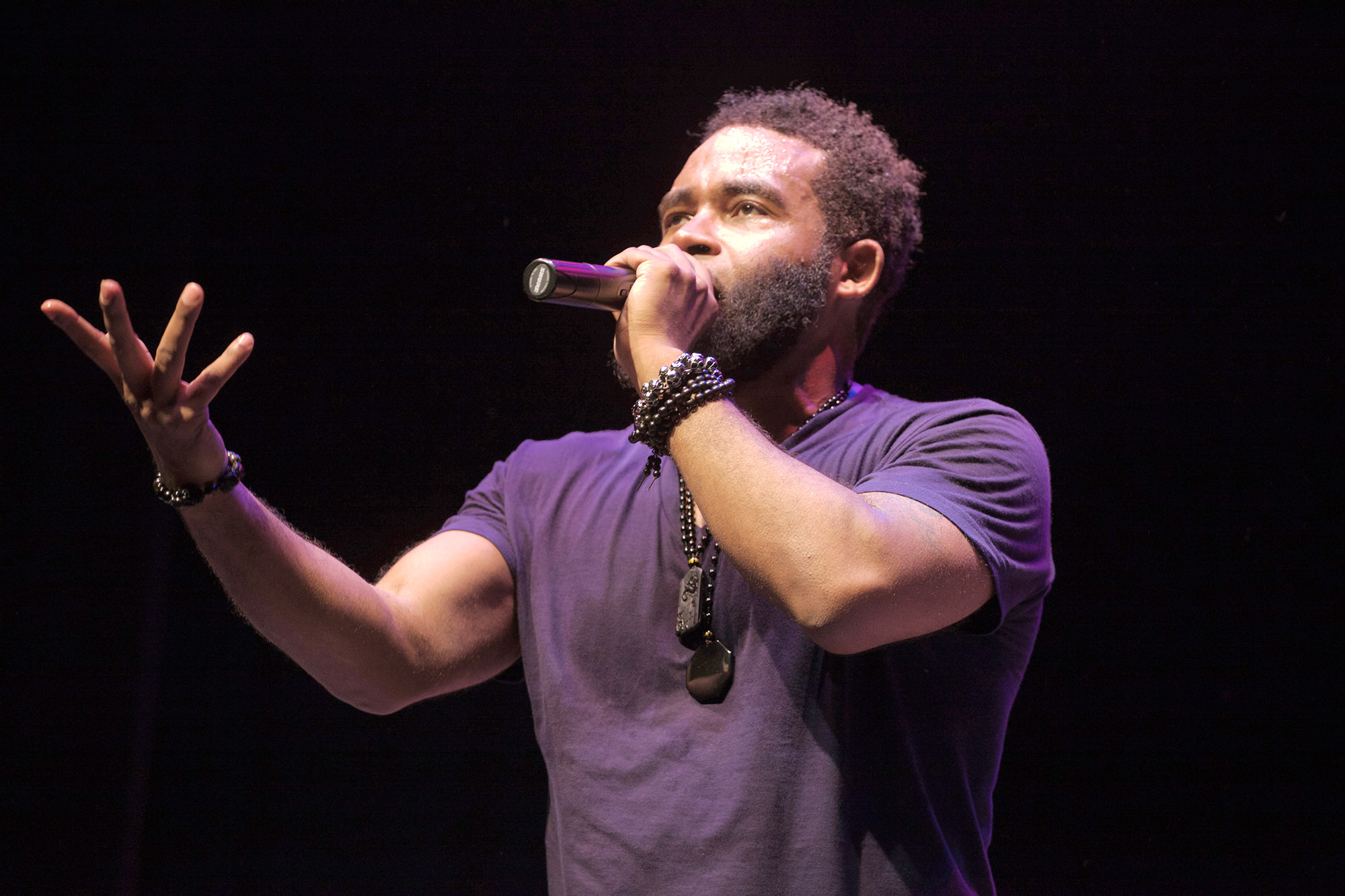 The day after his 45th birthday, Queens-based rapper Pharoahe Monch settled into his seat in the Duke University Forum for Scholars and Publics.

Monch is no stranger to Durham, his most recent visit being last spring when he performed at Art of Cool Fest. This time, however, his purpose was greater: a week in residence at Duke University.

Monch spent his week attending Duke’s renowned History of Hip Hop Class (co-taught by Dr. Mark Anthony Neal and 9th Wonder), offering guidance to students, speaking at the Forum for Scholars and Publics, and performing at the Reynolds Industries Theater. Discussion concerning his 2014 concept album remained at the core of his action last week, especially exploring the stigmatization of mental health in African American communities–particularly males. 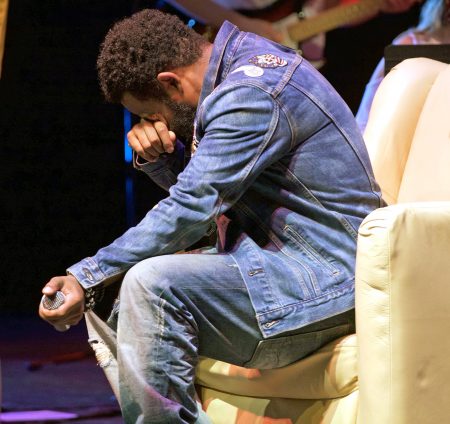 The discussion at the Forum for Scholars and Publics was moderated by Dr. Mark Anthony Neal, and initially covered topics such as Monch’s early career and sources of inspiration.

Then, there was a dramatic shift in focus.

Years ago, Monch spiraled into depression.

“At the time I was blessed to surround myself with really strong friends that were the foundation of my childhood and family, so when I couldn’t figure out why I was struggling I kind of immediately went home,” he said. “Their suggestions weren’t always good ones…I knew I was lucky. I started rapping about it because I had those feelings, but also so that anyone without that support could hear me speaking candidly and relate to it.”

Luckily for Monch, it was discovered that his depression was chemically induced by a cocktail of medications he was taking for his chronic asthma. His dentist actually identified that it was the combination of medications that was causing his emotional spiral, and Monch was able to reclaim control over his life.

As the talk progressed over the next hour Dr. Neal and Monch delved into topics like self-medication, intervention, art as therapy, and shattering stigma. Monch also reflected on the pressure for artists to engage in detrimental behavior and how some feel driven to help others overcome. 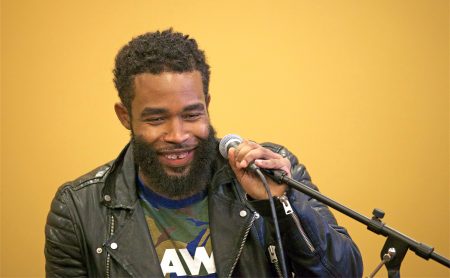 “There is a strong push as of late to create awareness and provide education on various mental health issues through art,” said Monch. “People like [Kid] Cudi and myself. People just coming out and being honest about it and telling people things will be okay.”

Monch also contemplated the ironic trajectory of his life and health.

“From a young age I knew I was into art, like I was headed to art school or something non-traditional,” he said. “I knew because of my asthma that I needed to eventually work in a way that allowed me to rely on my thoughts or even my art, but not physical labor.

“The irony is that as I got into music, the asthma became an enemy, a reason to fight against the illness verbally,” he continued. “In listening to Coltrane and different musicians who did long runs singing or long runs playing, it was a challenge for me to try to do that as an MC. I used it as a fight. I tried to propel myself to rap in a way that wouldn’t be expected of me. A gift and a curse.”

After a short, yet thought provoking Q&A session, the discussion concluded. Some of the audience members–faculty, aspiring musicians, local activists, students, and hip-hop fans–lingered to briefly chat with Monch, and ask for signatures and pictures.

“I don’t come to FSP events often,” said Raven Herndon, a Durham-based educator. “Dr. Neal gives a lot of talks, and I follow him online, so I thought I would come. I encountered Monch when was here for Art of Cool, so I know he has a stake in the Durham community and other Black communities everywhere. This was so powerful, and such a timely subject, especially when you consider things like rising police brutality.”

The next evening, Monch performed at Reynolds Industries Theater, co-sponsored by The Forum for Scholars and Publics and Duke Performances. He was backed by PitchBlak Brass, a band from Brooklyn. The show with Monch also happened to be their last performance as a band, as the time had come for their members to part ways and pursue other interests. With 14 instrumentalists and 2 vocalists, the ensemble seemed to evoke the complex emotion contained in Monch’s work almost effortlessly. 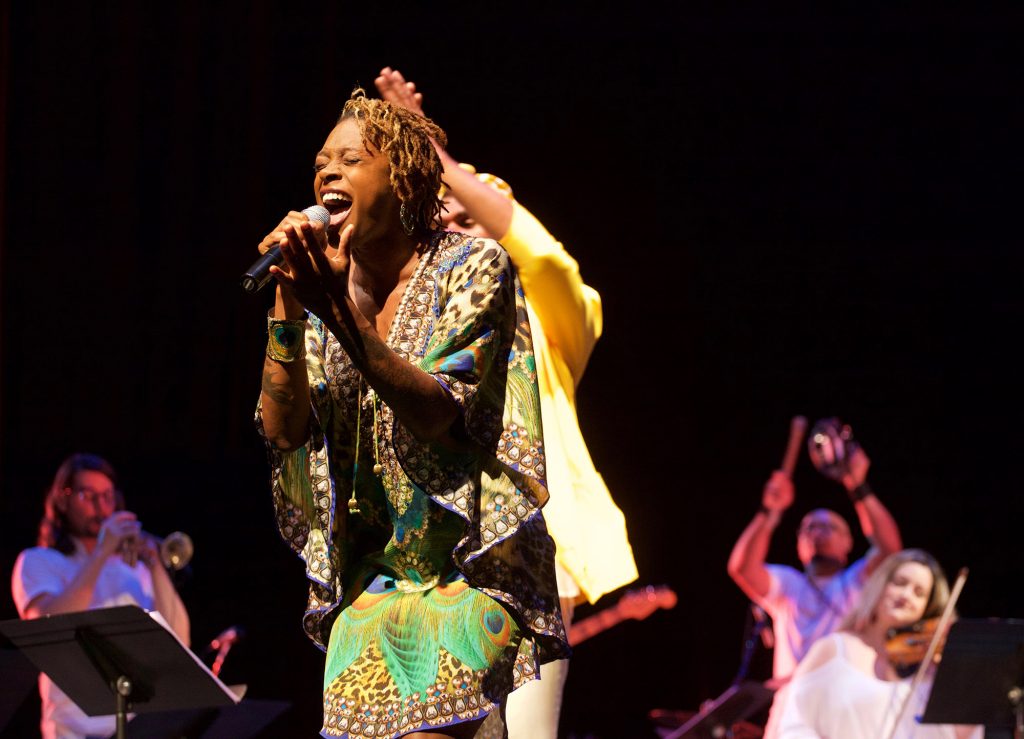 Riki Stevens was one of the supporting vocalists for Monch’s performance. (Staff photo by Gabby Bulgarelli)

But there was significant effort behind the performance.

“They were making a lot of noise in the city,” recalled Monch. “We thought it would be great to do a collaborative. We had to do over 10 rehearsals so that they could write the pieces and format them correctly and stuff. We added the string section and then we performed at Lincoln Center. The first show was so well received that we thought we’ve got to do this at least a couple more times.” 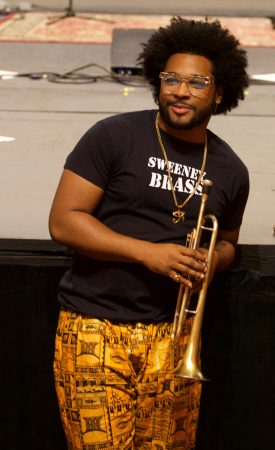 A hand raised up at the back of the Forum for Scholars and Publics.

“When can we expect another record?” said a happy-go-lucky man with a thick NY accent. Laughs and claps came from the audience.

“That, by the way, is his tour manager (Guy Routte),” interjected Dr. Neal, to an eruption of loud laughter.

“It takes me a long time and I tour a lot,” Monch chimed in. “So income-wise, I’m blessed to do that and it’s pretty fun as well. Many artists today have to make their income doing shows because records aren’t selling that well. It’s a shame, but that is really what pulls me away from the studio. This album is also being composed with a band, so it really is taking me quite some time to make Mr. Manager Man,” said Monch sarcastically, eyes pointed deliberately towards Routte.

Monch later revealed a bit more about his vision for his next studio release:

“Since I’m a huge rock guy, big Zeppelin fan, I’ve always been a fan of Plant’s vocals,” he said. “This new album is going to be hardcore, in a very soulful way. I’m really gonna try to get him on the record.”

While we wait on the next one, feel free to check out Pharoahe Monch’s P.T.S.D. here.