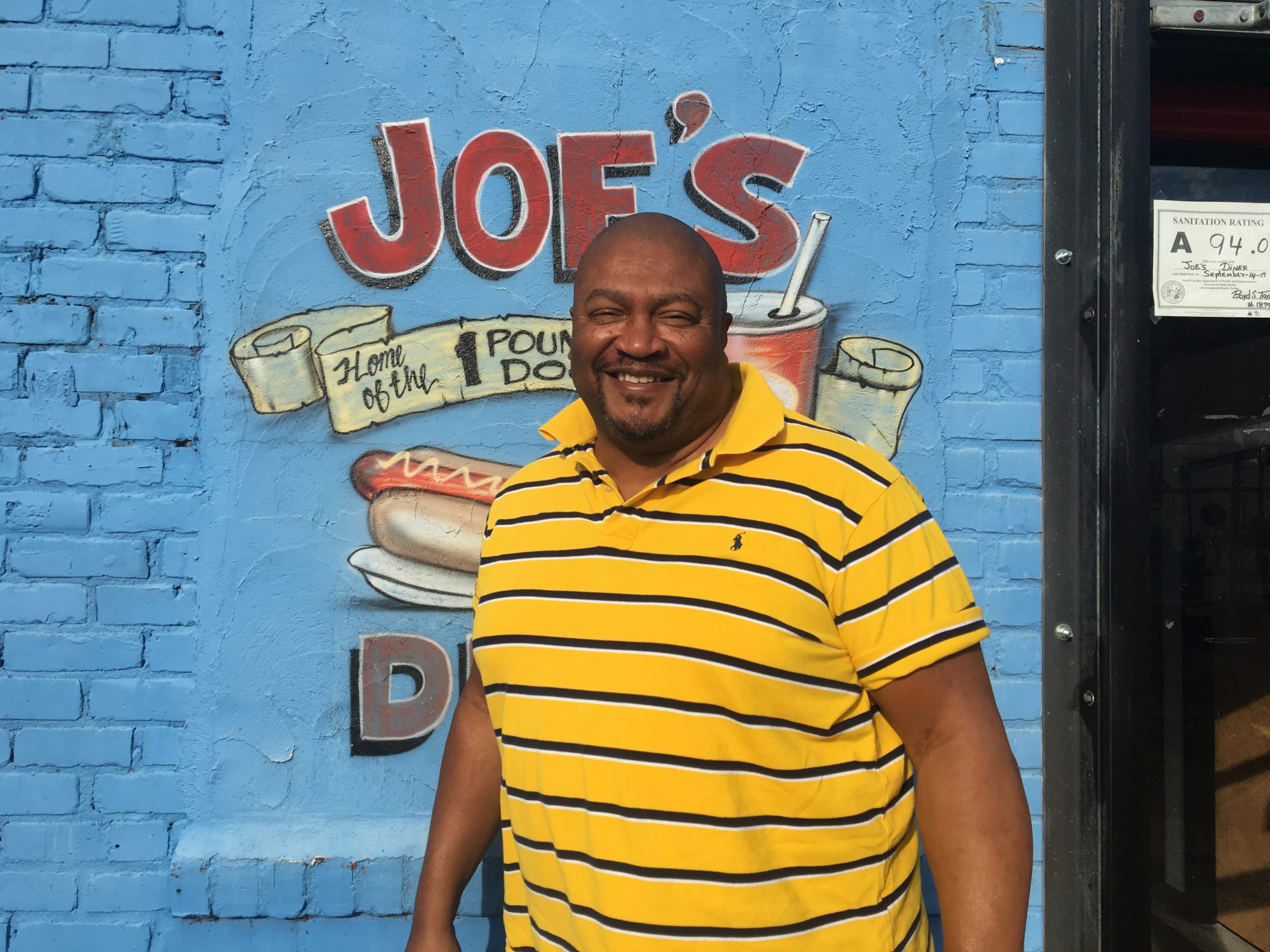 Community promoter Joe Bushfan believes in his future, and of the neighborhood. (Staff photo by Taylor Mabrey/The VOICE).

“My dream was just to help folks less fortunate than myself,” Durham resident and catalyst Joe Bushfan said when talking about his efforts in his community.

While Bushfan has been around Durham for a while now, he has no plan on stopping his efforts to help others. In 2020, he hopes to open a diner up for people to enjoy.

Bushfan said he plans to have his diner modeled after an old Woolworth’s Cafe. If you are not familiar, these old restaurants had a setup in which customers could watch their food being prepared. This allowed them to see exactly what they were getting and they would know it was of high quality.

Bushfan wants his customers to be able to know what they are getting. He also mentioned that he wants to serve foods of higher quality but still in an affordable manner. Thickness of bacon was a high point in this conversation.

If somehow you are not yet familiar with Joseph Bushfan, these are a few things you should know. He grew up in Roxbury, Boston alongside his six older brothers and three older sisters. He grew up near Bobby Brown, for whom he then began working as a bodyguard for and developed that into a 22 year long career. Bushfan went on to work with other celebrities such as Jay-Z, Earth, Wind & Fire, Eminem and more.

After moving to North Carolina in 2004, Bushfan started to realize that his area in Durham was reminding him of his home in Boston; it seemed a desperate neighborhood so he wanted to make a difference.

Bushfan invested $1,500 into a hot dog cart and began selling hot dogs on what he saw was the worst corner in the neighborhood, the corner of Angier Avenue and Driver Street.

He then went on to get one building, but ended up having three buildings and a parking lot to his name. Bushfan believes that his food truck, comedy club, and the commissary bring peace and harmony to the area. He said food and entertainment allow people to “forget about the outside” and all of the troubling issues in today’s society.

Bushfan has been quite successful in his goal of helping others. Whether it is opening his doors to a fellow neighbor or providing a job to someone in need, he has given hope to the area.

He has certainly had these successes, but he has also faced challenges. There are always people that oppose ideas, and he has dealt with a few along the way.

Sometimes things have made Bushfan want to quit, but he was able to settle himself by listening to the positive messages in the music of Earth, Wind & Fire.

He also finds comfort in his faith; Bushfan regularly attends church to grow his spirituality and uses that in his business.

Thanks in part to Bushfan’s efforts, this push for change has had a domino effect in the community– and the area is booming now.

“God has blessed me,” Bushfan said.

Bushfan mentioned many of his mentors when he talked about getting to where he is now. Dan Hill and Ben Feldman were just two names on the long list of influential and helpful people in his life.

For the future, Durham residents can expect the possible opening of Joe’s diner as well as Fridays featuring a weekly fish fry out of Bushfan’s trailer.

Reopening the diner will provide jobs in the area and will be yet another place for fellowship and friendliness. It will be a place for people to gather and enjoy each other’s company, he said, while enjoying a great meal.

Although Bushfan has already touched the lives of so many people in the community, he finds it exciting to think about what he will do next and how that will further benefit the area.

Taylor Mabrey is a journalism student at the UNC-CH School of Media and Journalism. This fall she is serving as a photographer-writer for the VOICE.