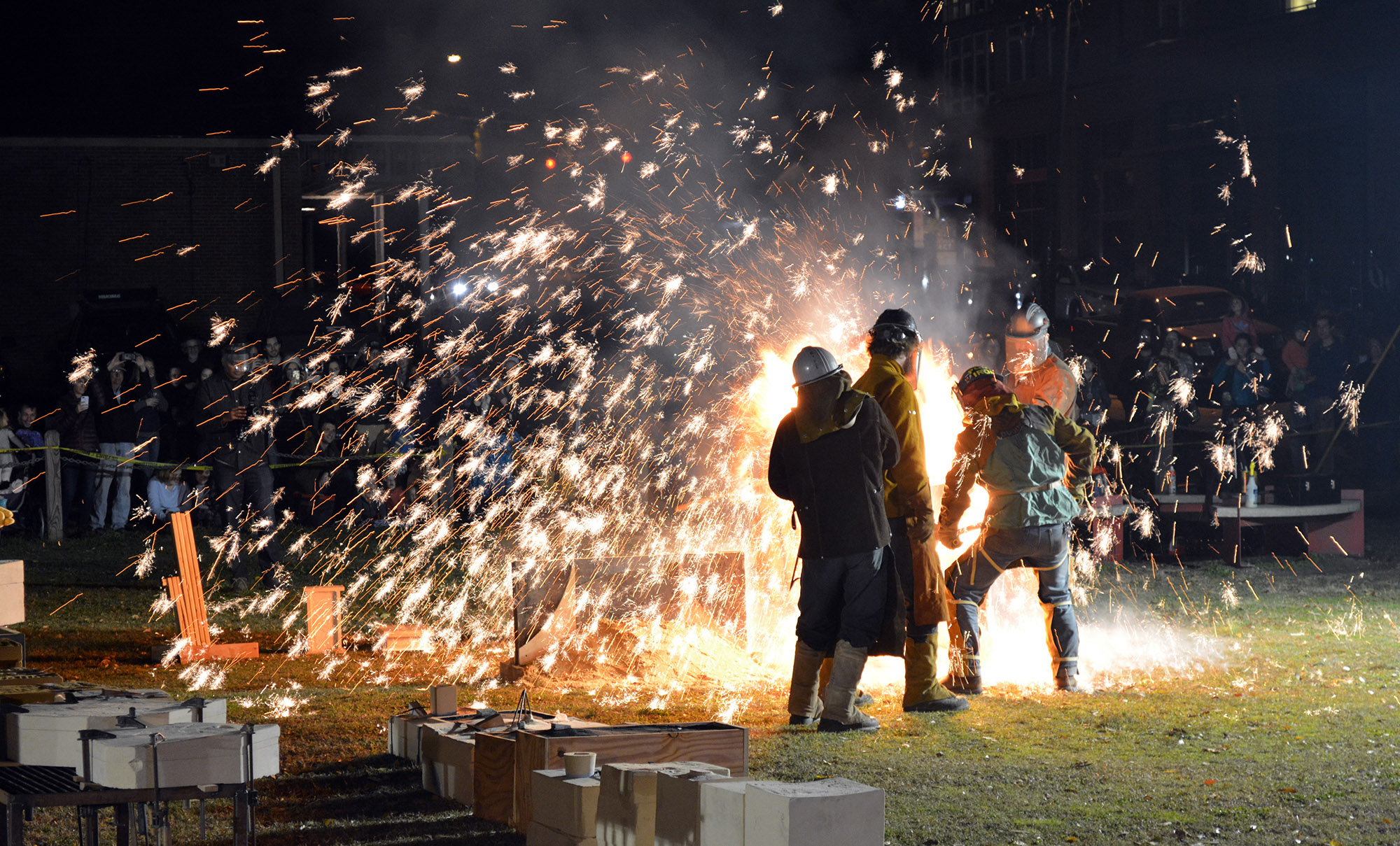 Half of Durham Central Park was roped off a week ago for Liberty Arts’ 2nd annual Iron Pour where 2,000 pounds of molten iron was cast into sculptures.

“We’re getting ready for the first pour, the molds are lined up, the artists are suited up in leathers,” said Carol McLaurin, vice president of the board at Liberty Arts. “They’re wearing spats to cover their feet they have leathers covering the legs and arms, and they have face shields. We also have a hose to make sure we can catch any sparks.”

Suzanne Renz came all the way from Virginia Beach for the event. The Liberty Arts Iron Pour is the only time that you can witness molten iron casting publicly on the East Coast. 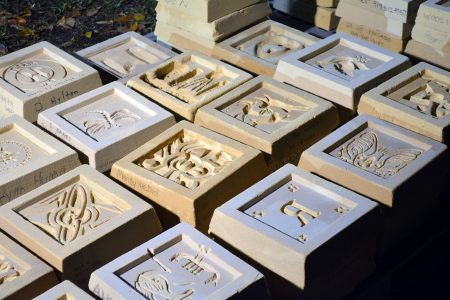 Community members created their own scratch-block molds to be cast in iron. (Staff photo by David Fee)

“This has to be the most dangerous form of art I’ve ever seen,” she said.

Every couple of minutes, Pour Master Tripp Jarvis would open the top of the furnace causing flames to shoot eight feet in the air. Then a scurry of artists and volunteers dumped in a mixture of coke — the fuel for the fire — and iron pieces.

“There is definitely a case of too many cooks in the kitchen, but there has to be,” said Kelly Johnston, residing jewelry artist at Liberty Arts.

Once the iron is melted, it flows out the bottom into a crucible made of aluminum oxide which is then carried to the molds for casting.

Many of the more than 400 attendees heard about the event on social media, while others simply stumbled across the commotion. NECD resident Kenny McQueen was walking home from downtown when he saw the fiery commotion.

“I saw all the people and I just wanted to check it out,” he said.  “I’ve never seen anything like this before, it’s pretty cool”

At one point the artists poured the liquid iron onto a mold and sparks shot 20 feet in all directions.

“It exploded like that because it was poured into a wood mold,” said Jackie MacLeod, a jewelry artist at Liberty art. “You’ll often get a really intricate texture and it will end up looking like coral.”

In these reaction molds, the moisture of the slab of wood reacts violently with the 2,900-degree molten iron. In fact, the iron never physically touches the wood because it is so hot. The result is a lacey texture which is unique and uncontrolled by the artist.

“They’re used exactly for this kind of pour, you can’t do it any other kind of way,” said Phillip Harrison, a specialist of metal melting who came from Maryland to help with the event. 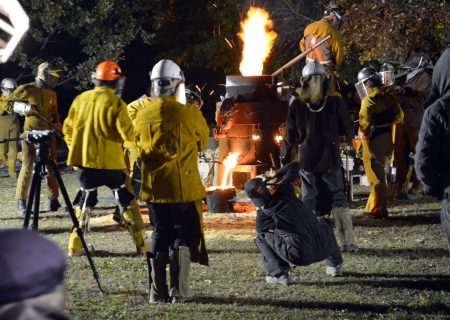 While much of the iron was used for both Liberty Arts sculptures and featured guest artists, the public also had an opportunity to get involved by making their own molds in the form of a scratch block — a small resin-bonded sand block that can be engraved with a design that yields a perfect negative made of solid metal.

Workshops for the scratch blocks happened all week at the George Watts Hill Pavilion.

“We sold more than 200 scratch blocks this year,” McLaurin said. “We probably would have sold 50 more if we didn’t run out of supplies.”

Liberty Arts had other entertainment at the Iron Pour. The event kicked off at dusk with Batala Durham, an Afro-Brazilian Samba drum group.

“It’s perfect weather for this kind of thing,” said Amanda Damon, a Southwest Durham resident, “and there are the food tucks and beer, which is nice.”

If the fiery furnace and molten metal wasn’t enough heat for you, fire stuntman Dragoonis Flame performed with his group Fire Arts Entertainment which included fire breathing, spinning and manipulation.

“I thought it was great,” Flame said. “I liked doing my performance while their fire performance was happening at the same time.”

Liberty Arts has had its metal-melting foundry since 2001, housed across the street from Durham Central Park. The foundry was created with a grant from Central Carolina Bank to make art for the people of Durham.

“One of the first pieces of art ever poured was Major the Bull, that was Liberty Arts’ gift to the city,” McLaurin said. “And we keep making more.”