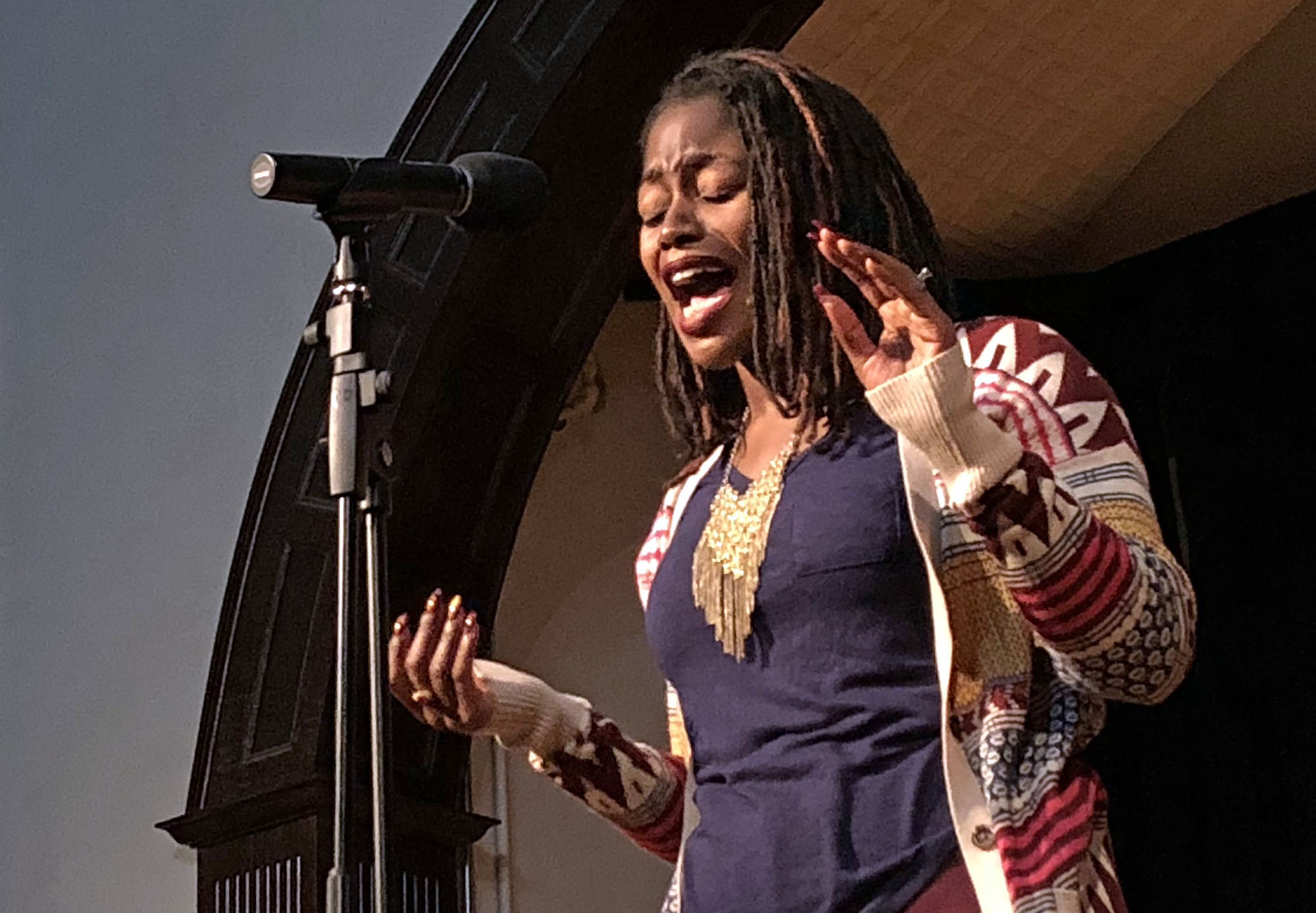 Winner of the Jambalaya Soul Slam Annual Women's Slam, Ashlee Connors, 28, delivers a passionate line to the audience. Connors will represent the City of Durham at the 2018 Women of the World Poetry Slam in Dallas, Texas. (Staff photo by Allen Longstreet)

Saturday nights typically warrant going out. Whether that be to dinner, a nightclub or a movie —  the city of Durham offers a wide variety of options. But this Saturday, on the quiet corner of Lakewood Avenue and Fayetteville Street, inside the Hayti Heritage Center was a collection of voices.

Voices that were passionate and undulating. Voices that could hopefully strike the right balance of content and cadence, delivering to the judges a performance that gained the scores needed to win the slam and qualify the victor to be the City of Durham’s representative at the Women of the World Poetry Slam 2018 in Dallas, Texas, where 96 of the nation’s best female poets compete over four days to be crowned Women of the World Poetry Slam champion. 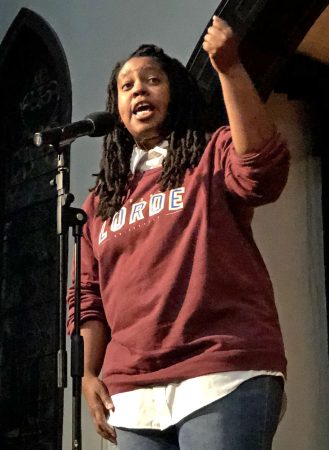 “The energy of slam is different,” said performer Ashley “Milli” Lumpkin, 32. “At an open mic, everyone is sharing their word, being vulnerable, trying out new pieces of work – and that part is awesome. But with slam there is the element of competition. Everyone gets on stage sharing their very best work in that moment.”

The slam consisted of four rounds. The first allotted each poet three minutes. Then, all but five poets were eliminated. The five remaining poets had two minutes in the second round, 30 seconds in the third round, and then, another elimination round. There was a tie in the scores, so four moved on to the final round.

“The final round gives the poets a little more room to breathe,” said the slam’s host, Mariah Monsanto, program director of Blackspace Poetry. They are given four minutes each.

“Comparing slam to open mic is the difference between watching your child’s basketball game at their school to a pick-up game on the street,” Lumpkin said.

Since this slam was a qualifier for Women of the World Poetry Slam, poets came out from all over. Greensboro, Fayetteville and even as far as Richmond, Virginia are just a few to name. A lot was on the line, but even in the toughest moments, the audience supported the poets to boost their spirits by snapping their fingers together.

Michelle Dodd, 27 of Richmond, Virginia has been doing slam and open mic since 2010. She drove the two and a half hours to compete. 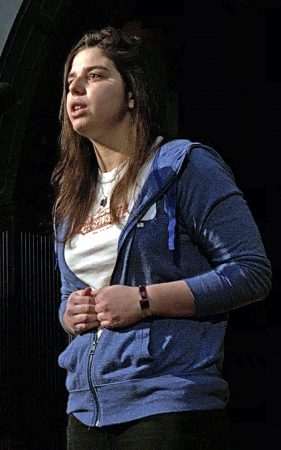 “When it comes to writing itself, it’s my therapy,” Dodd said. “This is where I can be most open, and where I feel comfortable being open. If I’m in my room, feeling down, I have that outlet where I can get all that negativity out on paper and actually sleep afterwards. It’s a mixture of community and being able to see what I’m capable of.”

Durham native Joey Lew, 22, is pursuing a master’s of fine arts in poetry at the University of North Carolina – Greensboro. She loves the slam community in Durham and says it’s probably one of the best within North Carolina.

“It’s a unique way of communicating,” Lew said. “Sometimes you get the urge to write and it sits there on the page and it’s good enough. Sometimes you write and you want it to be heard.”

And each and every one of the performers was heard. Their poetry included everything from religion, living as a black women and growing up queer with a father who was a Baptist preacher.

Michelle Dodd, 27, takes the audience through a traumatizing experience via her powerful poetry. (Staff photo by Allen Longstreet)

There was one round, though, that left a silence in the room that was unbearably loud in its own right. Almost all of the second round’s poetry was about sexual assault. Monsanto took a moment to address that on the stage and give words of encouragement of how we can do better by believing survivors and supporting them.

Then, the four poets continued on to the final four-minute performance.

The art that was left on that stage in that final round was raw, powerful and moving. Dodd brought the audience through the harrowing experience of her miscarriage. The poem ended with, “I would have been a great mother.”

In the end, after the scores were tallied, Ashlee Connors, 28, of Fayetteville, North Carolina was the winner of the slam. A Queens, New York native, Connors will be representing the City of Durham at the Women of the World Poetry Slam in Dallas next year.

When asked if she could tell the people of Durham one thing, what would it be? Connors’ concise, poignant response summed up the style and spirit she will be bringing to Dallas perfectly.

“The difference between living and existing is walking in spite of the fear.”