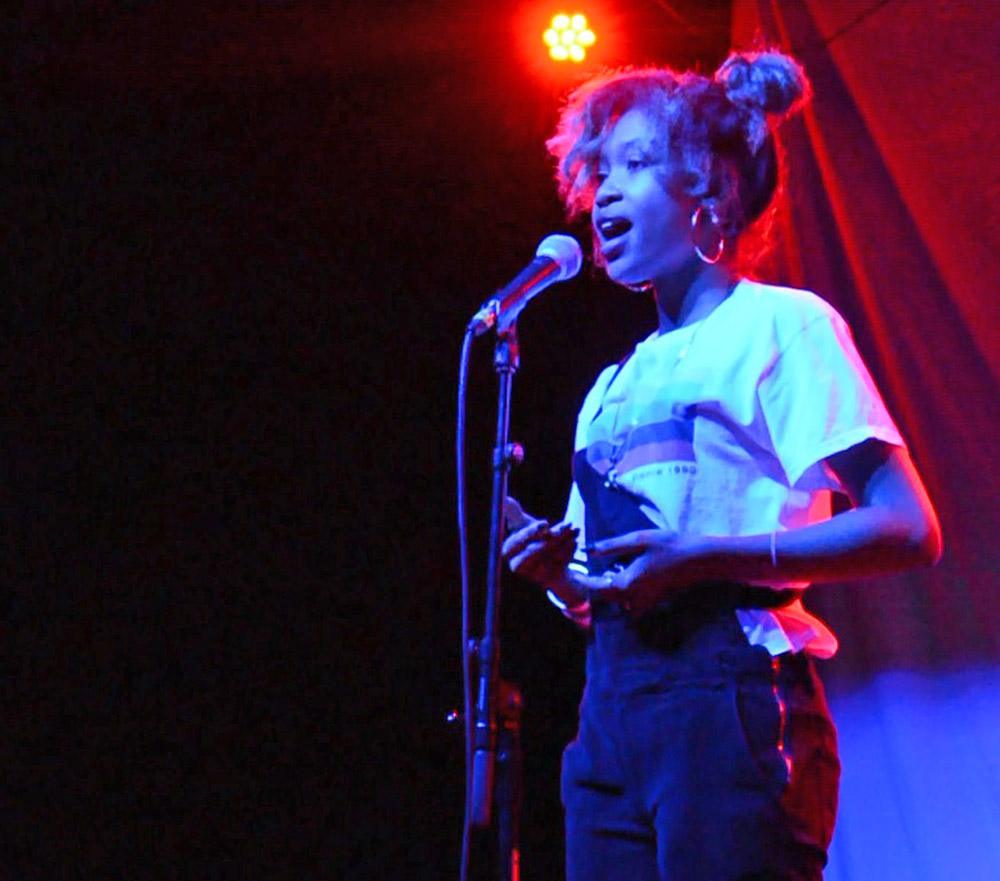 Durham R&B singer Ebony Nicholson, known as Ebz the Artist, warms up the crowd with her original R&B songs from her newest recording “The Feel.” (Staff photo by David Fee)

There is no denying that North Carolina is on the come-up in terms of hip-hop, and Durham is in the heart of it.

“He’s a lively person on stage,” said Phillip Wiggins, an executive at Durham’s Playground Studios where Toon records. “His flow is very original and he’s got a fresh sound. It’ll make you think.”

“Durham is crazy, there are so many creative gems out there.” Wiggins said.

One of those Durham artists was Ebony Nicholson, 20, who warmed up the crowd with her original R&B songs from her newest recording “The Feel.”

“This is my kind of vibe,” Farrar said while surveying the Durham audience from onstage. “My kind of tribe.”

While many consider hip-hop from the triangle to be a different scene than that of Charlotte, Toon and Farrar have formed a unique partnership that spans the two cities. It’s been more than two years since the rappers have shared the same stage. 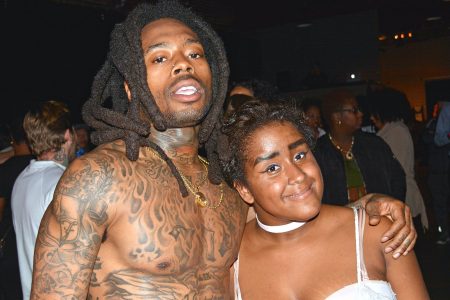 “Deniro is fire,” said Toon. “He’s way more famous than me. Deniro doesn’t need to open a show for me, but that’s my homie. And he is here with support from Charlotte.”

Farrar is also known as the “Leader of Cult Rap.” Cult Rap is a genre of music that connects with its listener through social commentary. Cult Rap is a Reality Rap, more reality than rap.

“This next one is something y’all probably know about,” Farrar said onstage. “It’s called ‘Gentrification.’”

“Is what it is, baby life move on/Gotta love struggle cause it made me strong/Whole Foods in the hood now the rent got raised/But I’m still living off minimum wage” he rapped.

“Gentrification” is one of Farrar’s most popular tracks from his Red Book, Vol. 1 E.P.

While Farrar is known for giving his heavy-hitting bars on important social issues, he also has his heart-throbbers.

“There’s a lot of women out there, so I should probably perform this song,” Farrar said. “It’s called, ‘Tell Me.’”

One was Jay Parish, 15, a Durhamite Farrar fan who knew the lyrics to every song.

“Deniro Farrar is one of my favorite rappers,” she said. “I want to be a rapper myself, so he is very inspirational.”

Professor Toon kept up the high-energy show after Farrar left the stage, performing lead singles off Release, which is scheduled to come out in January.  His club-worthy single “OkOk” is rumored to feature popular Durham Rapper G Yamazawa.

“There’s the history that you’re taught, and there’s a history that happened,” The Professor said on WUNC public radio. “It’s your job to take an extra set of notes.”

Like Farrar, Toon’s raps aim to change the narrative of race in America and in their communities.

Many of his songs draw from his experiences growing up in Durham.

“Originally I’m from Cheek Road but moved to Southside, but I’ve been around a lot,” Toon said. “Basically all the blood neighborhoods.”

Toon hopes to continue to build the North Carolina hip-hop platform to gain its much deserved national attention.

“We’ve all been working hard to raise it up,” Toon said. “Its going to take the whole Triangle to really put on. It’s going to take a Rhapsody from Raleigh, a native of Chapel Hill, and me to really make it pop.”