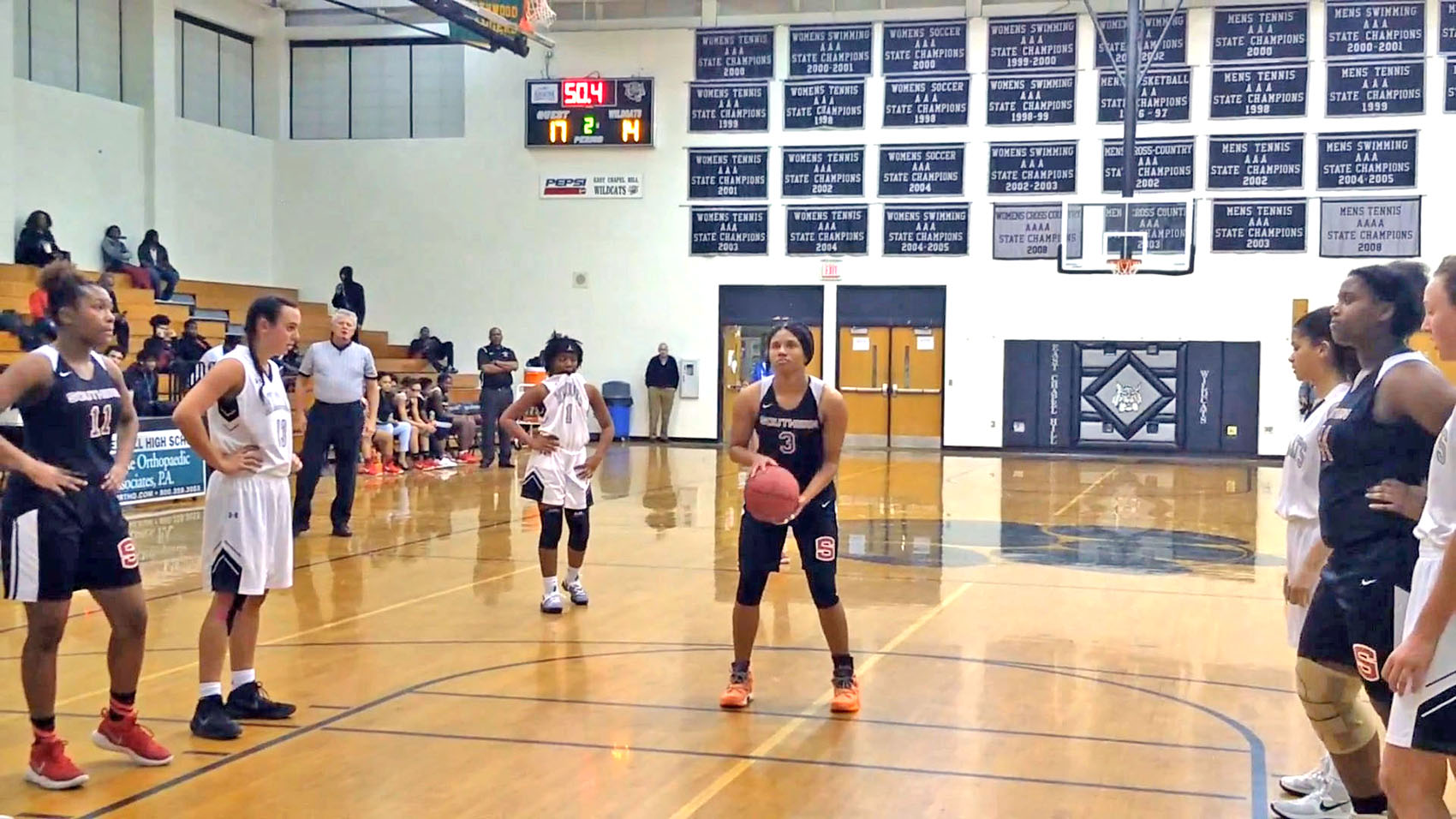 J-Naya Ephraim (center) shoots a free throw in the Southern Durham women’s basketball team’s 50-33 victory against East Chapel Hill on Jan. 26. Ephraim, who will play at the University of Illinois next season, has developed as a leader during her senior season. (Staff photo by Brennan Doherty)

Years ago, J-Naya Ephraim bet on herself and now she’s reaping the rewards. And so is the Southern Durham women’s basketball team.

In 2012, Ephraim, a seventh-grader at the time, was becoming cognizant of her basketball skills and where the game could take her. So even though it meant leaving her mother and the place she grew up, Ephraim moved from the U.S. Virgin Islands to Durham to live with her father and help advance her development as a player.

“I was starting to take basketball serious, so she moved me up here with my dad,” Ephraim said. “And after that, I just started taking it a lot serious.”

The decision has paid off. Next season, Ephraim will be playing for the University of Illinois.

In the meantime, there’s unfinished business at Southern, where the Spartans have carried a strong finish from last season into this year’s campaign, one that’s shaping up to be transformative for the program.

One season removed from a 10-14 record, this year’s team (13-5, 9-1 Big East 3A) has already bettered its win total with four regular-season games remaining.

“Everybody doubted us,” Ephraim said. “Everybody in Durham, everybody all over. ‘Southern Durham? They not gonna do nothing.’”

The power of self-belief

Just over a year ago, Southern found itself in a completely different situation. The 2016-17 Spartans were 1-11 through the first 12 games of the season as they struggled with their youthfulness.

But Southern eventually broke through, and as the wins started to come, so did a new sense of confidence. The Spartans finished the season with nine wins in their final 12 games. 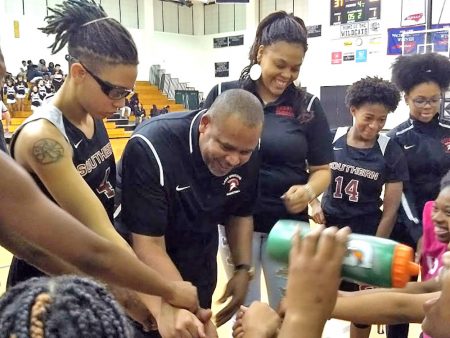 Southern Durham women’s basketball team head coach Teddy McKoy talks to his team during a timeout in the Spartans’ 50-33 win against East Chapel Hill on Jan. 26. McKoy said this year’s team has been “like one big family.” (Staff photo by Brennan Doherty)

“All of them grew up,” Southern head coach Teddy McKoy said. “They got older. We were so young last year – we had like seven freshmen last year.”

What led to the transformation? Simply put, the Spartans became more familiar with one another, senior guard Jonisha McDaniel explained.

“Everybody knows who can do what, who can’t do what,” she said.

For that reason, McDaniel expected this season to be a good one. For the most part, it has been. In addition to sitting atop the Big East 3A conference standings, the Spartans defeated rival Hillside, a traditional power, in January for the first time since 2013.

“It wasn’t the best that we brought out on the court, but we won overall and that was the great part about it,” said McDaniel, who scored 10 points in the 34-30 win. “It was an ugly win, but we got through it.”

Ephraim develops as a leader

A grin stretching from ear to ear comes across Ephraim’s face when she reflects on the win against Hillside.

It was a game she wasn’t supposed to play in because of an injury, but one she wasn’t going to miss.

“My ankle was messed up, but you know, I told coach, ‘I’m playing,’” Ephraim said. “‘I’m going to get you this win against Hillside. We’re going to make history today.’ That meant a lot to me. Deeper than me, I’m happy that I can leave Southern saying that we beat Hillside finally.”

That type of selflessness is what’s made Ephraim irreplaceable to Southern. Her on-court impact is clear: She’s the Spartans’ go-to scorer, can play nearly everywhere on the floor, and helps anchor a high-pressure defense.

But just as important has been Ephraim’s ability to develop as a vocal leader and serve as a guide to her teammates.

“She’s like a big sister for all of us, so we all look up to her,” sophomore guard Taylor Robinson said. “We all want to not disappoint her and all that because she sacrifices and does so much for us.”

McKoy, who is in his fourth season of his second stint at the school, said that, for whatever reason, “Everybody thinks Southern’s just a bad school.”

He’s confident that reputation will change, though.

“This season here’s gonna change it without a doubt,” McKoy said. “Like I always told the girls, everybody wants to be a part of a winner.”

So far, the Spartans have been just that. 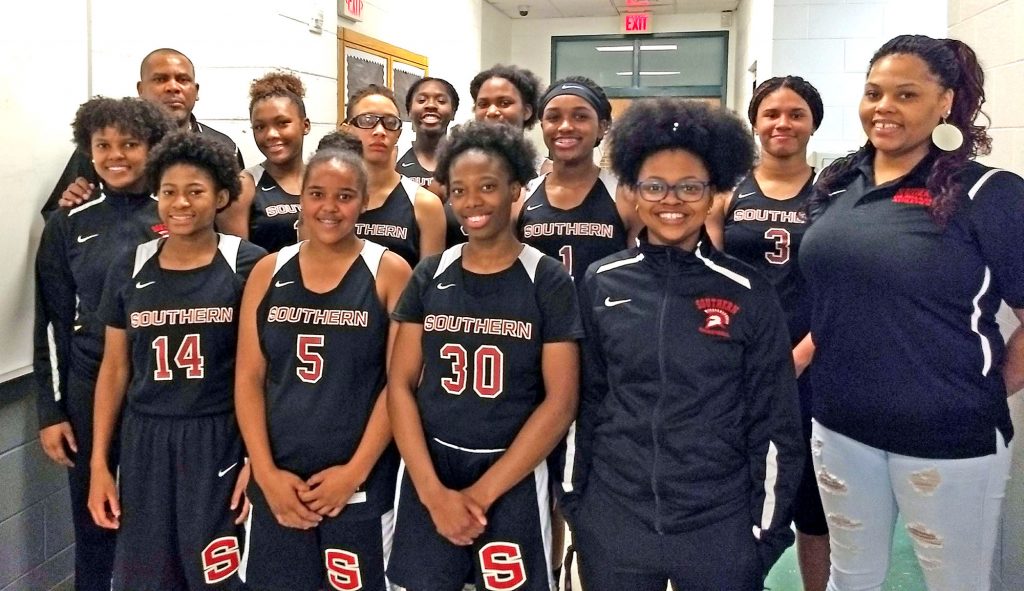